Kenney learns it takes a village at South Philadelphia school 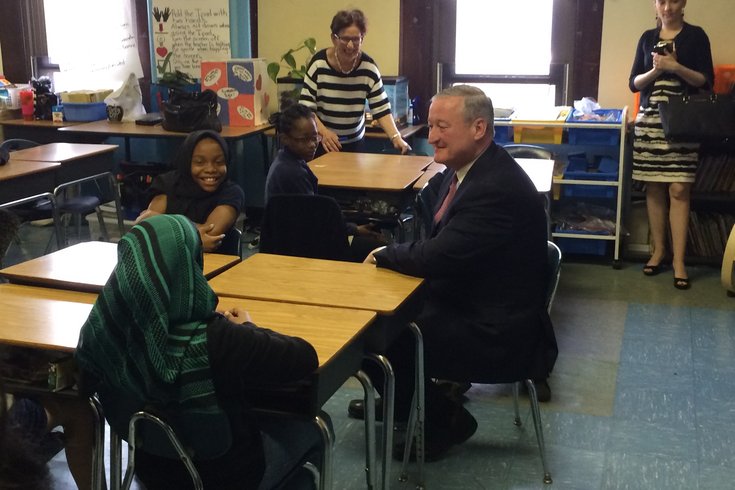 Visiting Edwin M. Stanton Elementary School in South Philadelphia on Thursday, Mayor Jim Kenney sat in a too-small desk to watch a mock trial by sixth graders in Rebecca Kraus' class, stopped by a class of 4th graders who were studying a court case and joked with other students while telling them about the history of the civil rights movement in Philadelphia.

But Kenney was there to learn, too.

One of the mayor's keynote initiatives in his first term is community schooling, a concept that students, teachers and administrators at Stanton know well.

A community school is both a place and a set of partnerships between the school and other resources in the community. By focusing on academics, youth development, family support, health and social services and community development, proponents believe the result is better student learning, stronger families and healthier communities.

At Stanton, the courtroom educational programs observed by Kenney were brought to the school through a partnership with the Rendell Center for Civics and Civic Engagement, one of the many community resources it maintains. The programs teach students about literacy and social studies at the same time, according to principal Stacey Burnley.

Over the years, Stanton has turned to partners to fill educational gaps due to inadequate school district funding. The partners provide cultural education, mentoring and academic programs that look similar to the ideas espoused in Kenney's plan.

That plan – one of the initiatives contained in the mayor's spending plan yet to be approved – would transform 25 city schools into "community schools" over the next five years, offering basic programs and services through a coordinated effort by parents, educators and community members.

Under Kenney's plan, each school would have a community coordinator to create a strategic plan to build, manage and maintain partnerships. Much of that is already being done at Stanton.

Susan Gobreski, director of the community schools initiative for the city's Office of Education, said it was important for the mayor to see it in action.

"By coming to a place where this is really working, it shows how this can have a positive impact," she said. "It's an incredibly important new way of thinking."

Stanton works with more than 30 community partners – with at least one relationship stretching back two decades – in order to supplement educational offerings, especially in areas where the Philadelphia School District hasn't provided adequate funding.

"I can't even imagine what education would look like if we had the funding [we need]," said Burnley, noting the school would be even better if it received additional funding from the district.

"There are so many schools out there that are short-staffed and they might not be able to take on the work. If we didn't have these partnerships, we wouldn't have dance or drumming... or a lot of things." – Kat Kushin, community partnerships coordinator, Stanton Elementary

Along with learning programs, like the courtroom case studies, partnerships offer cultural education, like dance and music programs. Without them, Burnley said, the school would lack such programs.

"Children don't just learn from a textbook," she said. "Kids need experiential learning... Not having that, limits kids' experiences and kids learn through experiences."

At Stanton, Kat Kushin, works as the community partnerships coordinator. She came to the school through other Stanton partners – AmeriCorps VISTA and the Philadelphia Higher Education Network for Neighborhood Development.

"Stanton has a lot of community partnerships," said Kushin. "We need to do assessments and make sure needs are being met... to make sure it's mutually beneficial."

The ability to work with partners to offer needed educational programs they otherwise wouldn't get, she said, sets Stanton apart. (Sixteen city schools already work with coordinators from AmeriCorps VISTA.)

"There are so many schools out there that are short-staffed and they might not be able to take on the work," she said. "If we didn't have these partnerships, we wouldn't have dance or drumming... or a lot of things."

In addition to her network of partner organizations, Kushin works closely with parents, teachers and community members involved in Stanton's School Advisory Council. She also uses regular newsletters to keep parents and community partners informed about what's going on at the school.

Temwa Wright, a parent and member of the SAC, said that she loves the way Stanton has embraced partnerships and the community.

And, she can't wait to see what these partnerships might bring to the school next.