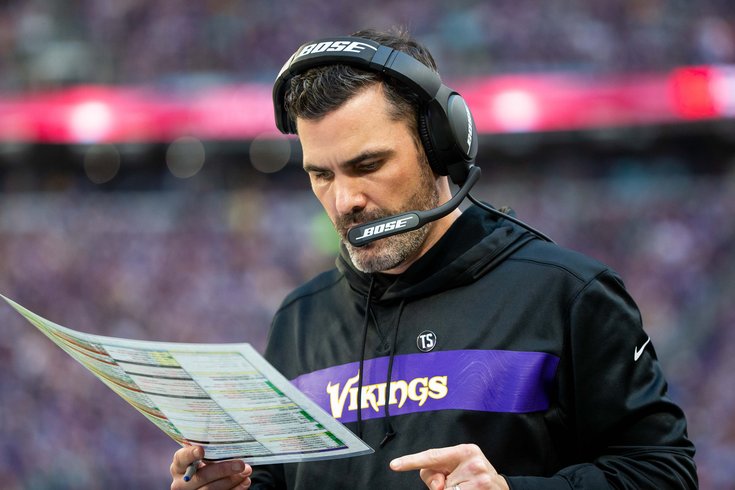 Kevan Stefanski is as Philly as it gets — except when he's coaching for the Vikings against the Eagles.

The eyes would sometimes be half-mast, as the days would meld into each other when Kevin Stefanski would be reminded to go get the oranges, or make a Dunkin’ Donuts run to get coffee for the University of Pennsylvania coaching staff.

Stefanski is 37 now. There are traces of salt in the beard as he grins back at the memory of where his coaching odyssey — a familiar journey many coaches travel — started. A three-year starter at St. Joe’s Prep, and all-Ivy League safety at Penn, Stefanski went from the cover of the Penn football program as a captain of the 2004 Quakers to fetching oranges and coffee the next fall at Penn as a graduate assistant.

It’s led to where he is today, and who the Eagles will have to solve on Sunday, as the offensive coordinator of the Minnesota Vikings.

Stefanski, the son of Ed “The Shot” Stefanski, former Philadelphia 76ers’ general manager and now senior advisor for the Detroit Pistons, grew up in Drexel Hill, Delaware County, living and breathing the Eagles every fall Sunday with his family.

This Sunday, the Stefanskis will be wearing Vikings’ purple for obvious reasons.

Kevin had great coaching influences early on, in not only his father, who coached Monsignor Bonner to a Catholic League basketball championship in 1983, but hoops coaching legends Speedy Morris and Fran Dunphy.

Kevin had nothing handed to him, either.

Before the headset went on, he was tasked with the same menial chores many new coaches endure.

“You learn fast, and it’s little stuff that helped me get here,” said Kevin, who interned the summer of 2005 for the Eagles under Andy Reid (the Terrell Owens driveway sit-up summer). “Like anything in life, you have to earn it. I was working in the Penn department of football operations, and like a lot of entry-level gigs in all industries, it’s sometimes hard to see the light at the end of the tunnel.

“You have to do the stuff no one else likes to do. It’s why I think it’s so important for young coaches, and young people in general, to get a dose of that reality of starting at the bottom. You have to eat your humble pie and do all of that work, because there is a ton of coaches who did it before you.

“One season I’m the captain of Penn, on the cover of the program thinking that you’re hot stuff, and the next season, you’re the guy getting the oranges and getting coach (Al) Bagnoli his coffee. Do you love doing that, not really. But like anything in this world, you do have to earn it. It was a good lesson at the time.”

An interesting nugget is that Kevin is the longest-tenured coach on the Vikings’ staff. Right after leaving Penn, Stefanski was hired by then-Vikings head coach Brad Childress, who knew Stefanski through working with the Eagles.

This is Stefanski’s 14th season with the Vikings, who have undergone three head coaching regimes since he’s been there (Childress, Leslie Frazier and now Mike Zimmer). Stefanski has coached everything from quarterbacks, tight ends and running backs, to taking over for (former Eagles’ quarterback coach) John DeFilippo as the Vikings’ interim offensive coordinator in Week 15 of last year.

Did he see this success coming in coaching?

“Not really,” admitted Kevin, who was initially given a chance with the Eagles through James Urban, who previously worked at Penn before becoming an assistant under Reid and is now the Baltimore Ravens quarterbacks coach. “I worked for a little time in commercial real estate, just after college. But I wanted to have something to do with the game.

“Working at Penn, coach Bagnoli allowed me to have some input. I can remember sitting in on the coaches’ meetings and diving into the Xs and Os and that’s the first time I got the bug to coach. What’s the old saying, if you can’t play, you coach. That’s what I did.

“I loved it. But I’ve always loves it. I fell in love with the game way back when. I coach a kid’s game and there is a grinding element to it, but everyone else who works different jobs is grinding to some degree. It’s why I hate when people bring up the hours coaches put in.

“There are enough hard-working people who wake up early every day to go to work. It’s why I pinch myself every day to be happy to be doing what I’m doing.”

Growing up an Eagles’ fan, Reggie White was Stefanski’s guy. He can remember as a kid asking his mother to pencil in ‘White’ and ‘92’ on the back of a white t-shirt.

As an OC of an NFL team, this is a different world for Stefanski. He’s the bossman.

“I manage more people and my whole thing as an OC, and what I’m trying to do, is be a facilitator, because I have so many good people around me,” Stefanski said. “I have good coaches; I have good players. That’s what I noticed under all of the great coaches I’ve worked under.

“I have great confidence in this job, because I have an awesome coaching staff, and awesome players. It’s a job that I feel that I have been preparing for and my experiences with all of the positions that I’ve coached have helped me.”

Through his progression, Stefanski credits working with various schemes under coordinators like Darrell Bevell and the West Coast offense; Bill Musgrave, a proponent of the Ron Erhardt way; Norv Turner and the digit system; and Pat Shurmur and his West Coast background.

Stefanski said his focus right now is to make the Vikings a winning football team. He’s prone to bounce some things off his father Ed, who’s a lifelong Eagles fan who becomes a Vikings’ man when they play his beloved Birds.

“I love all of the Philadelphia pro teams, but this time, I’m pulling for the Vikings,” laughed Ed, 65, who is still an Eagles’ season-ticket holder. “Blood is thicker than water or for my love of the Eagles. I got my Super Bowl. Now I can pull for the Vikings.

Asked if there is anything that Kevin does that reminds Ed of myself, “Well, it’s not the hair, that’s for sure,” Ed said. “I think all of my sons are good at what they do, and that’s a credit to their mother. All of the boys do the right thing. I’m proud of them all. With Kevin, he worked for everything.

“My three other sons are still in the Philadelphia area, and they’re still Eagles’ fans — except when they play the Vikings.”

Ed will be overseas with the Pistons this weekend, but he’ll be locked into his phone keeping track of the Vikings-Eagles game.

This is going to be a pivotal game for both the Eagles and the Vikings this Sunday. Both teams are 3-2; both have high expectations this season. Minnesota is coming off an 8-7-1 season after losing to the Eagles in the NFC championship the year before. It’s a loaded offense featuring Kirk Cousins, Dalvin Cook, Stefon Diggs and Adam Thielen.

“We’re a better team on offense, we’re better running the football and we have more continuity, and that comes with more time together,” Cousins said. “It is a new system under Kevin and there is a lot of change, but that comes with learning any new system.

“I think it’s positive for us. It’s become second nature.”

Said Kevin, “Coach Zim has molded this team in his image, and that’s about being a physical team that runs the ball and plays good defense. I like the guys that we have. We don’t have to prod guys to go out and practice. The pieces are here.

“It’s now about going out, grinding and getting it done.”