A look ahead to the 2016 quarterback class: Brandon Doughty edition 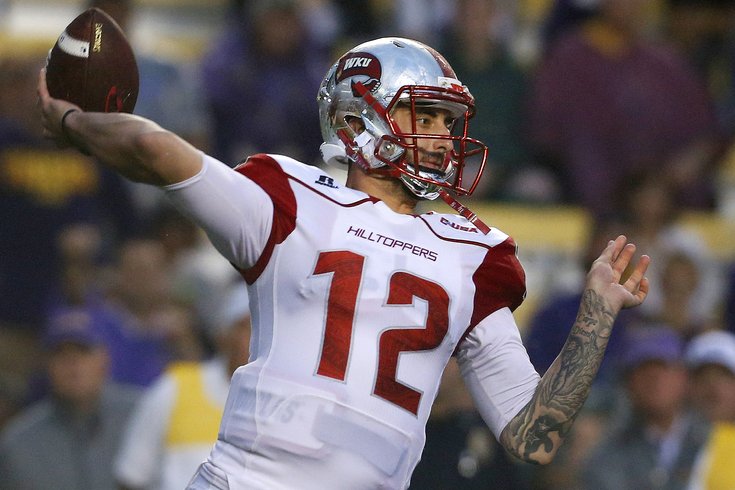 No matter what happens the rest of this season, or whether the Eagles re-sign Sam Bradford this offseason, one thing feels very clear -- The Eagles need to find a way to get a quarterback in the 2016 NFL Draft.

This upcoming draft does not appear to have a bona fide consensus No. 1 overall pick-type like Jameis Winston or Marcus Mariota a year ago, but may have a good amount of depth in rounds 1, 2, 3 and beyond.

Today we'll take a look at a quarterback who is a bit off the radar, Western Kentucky's Brandon Doughty.

Since 2000, if you include this season, 25 college quarterbacks have attempted at least 300 passes and topped a passer rating of 170.0. Five of them were drafted #1 overall, 12 were drafted in the first round, and only four went undrafted. Two of the undrafted players are currently on NFL rosters. The full list:

If you'll note, Doughty's 2015 season is eighth on the list, which speaks to his outstanding efficiency. CBS Sports currently has him rated as the 106th best prospect overall and the eighth best quarterback. While I believe both of those rankings are too high, Doughty is almost certainly going to get drafted. Here are his numbers the last two seasons:

DraftBreakdown.com has a library of three games for Doughty -- LSU and Louisiana Tech in 2015, and Central Michigan in 2014. I watched all three. Here's what I liked, and what I didn't like.

Doughty throws a very catchable, very accurate ball. With the exception of some throws against LSU in heavy rain, Doughty almost never missed his receivers. For example, here's a great back shoulder ball that Doughty's receiver misplays. This is an excellent professional throw:

And here he is dropping one in the bucket on a deep ball, after a nice sell on the play fake:

Despite playing at a smaller school, Doughty is a polished player. To begin, he gets the ball out quickly. So far this season, Doughty has only been sacked 13 times. He was only sacked 19 times in each of the previous two seasons. That's 51 sacks in three seasons. By comparison, 2015 QB prospect Brett Hundley was sacked 124 times his last three seasons at UCLA.

Doughty also sells play fakes well and he goes through his progressions quickly. Here he is looking at his receiver on the crosser, then the TE, then hitting his receiver down the sideline on the money. Well done:

I'm not going to sugarcoat it -- Doughty better be extremely accurate, because has a weak arm. Two examples:

1) Here, Doughty rolls to his right and really seems to put everything he has into this sideline throw. It gets there, but without much velocity.

2) And here's an intermediate throw that just doesn't have much zip. You can complete these against Louisiana Tech, but pro defenses are going to swarm to these types of passes:

While Doughty does make quick decisions, the ball comes out slowly once he knows where he's going with it, and he has a windup. Here's an LSU defender taking advantage of Doughty's slow release, with a sack/fumble/TD:

The big windup combined with the lack of velocity is going to give defenders more time to get to throws, which should lead to more interceptions at the next level.

Doughty ran once that I saw in the three games I watched, and is not a threat with his legs. He's a pure pocket passer, which isn't the worst thing, but he just doesn't have the running aspect in his game.

I don't see Doughty as a legitimate starting quarterback at the NFL level. I do, however, believe he can be a very reliable backup, who can manage games and stay out of mistakes with his smarts and accuracy. I see him as a steady player with a very limited ceiling based on his lack of arm strength.