The Room 4 Bar is 100 square feet – including the closet 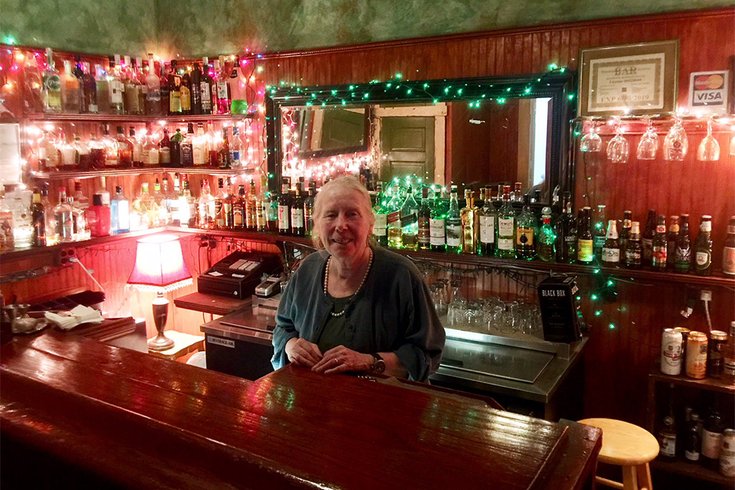 Danielle Martinez, who grew up in Haverford on the Main Line of Philadelphia, is seen behind the bar of Room 4 Bar, the tiny pub in the historic hotel she owns in an Arizona mining town.

So when teachers in the Centennial School District in Bucks County went out on strike in 1976, the prospect of walking a picket line in the cold turned to thoughts of a spontaneous vacation in the sun.

Martinez and her husband, Manny, put the children and family dog in the car, and drove west – all the way to Arizona.

Within weeks, the couple had purchased an old hotel in a mountain mining town, never to settle again in the Philadelphia area.

Today, the 73-year-old hotelier and retired teacher is the proprietor of the smallest bar in the Copper State.

The Room 4 Bar – all 100 square feet of it, including the closet, she laughs – greets guests and locals in a windowless former guest room down the hall from the second-floor lobby of the Silver King Hotel, a former boarding house for miners built in 1900.

There are three stools at the bar, plus "an old wooden container and a couple of old chairs in the corner," Martinez noted in a recent interview.

"It's just blossomed into this thing I have no control over anymore. It's busy all the time."

The Silver King fronts Brewery Gulch in Bisbee, a small town a mile high in the Mule Mountains about eight miles from the Mexican border, where mining operations continue today.

Some 50 bars and brothels lined the then-notorious Gulch thoroughfare during the town's mining heyday in the late 1800s, when the lands around Bisbee produced 3 million ounces of gold and more than 8 billion pounds of copper. Silver and lead and other metals were mined, too.

Spurred by the mining boom, Bisbee was one of the largest cities between St. Louis and San Francisco by the early 1900s, with a population exceeding 20,000 people.

Success in the mountain mining camp, however, led to a dark episode that changed Arizona history and impacted labor activities across the country. During the Bisbee Deportation of 1917, about 1,300 striking mine workers, their supporters and bystanders were arrested at gunpoint at the Copper Queen mine and deported by a deputized posse on July 12, 1917.

At the behest of the area's major mine company, Phelps Dodge, the arrested were loaded on cattle cars and sent on a 16-hour journey through the desert – without food or water – to New Mexico, where they were dropped off with a warning not to return to Bisbee.

Phelps Dodge finally curtailed mining operations in 1975. As mining workers packed up and left, the town saw a surge of artists and creative-types who fell in love with a place anchored in its authentic Old West history.

In fact, it was the perfect time for Danielle Martinez and her family to arrive in the town atop the Ompah Mine. 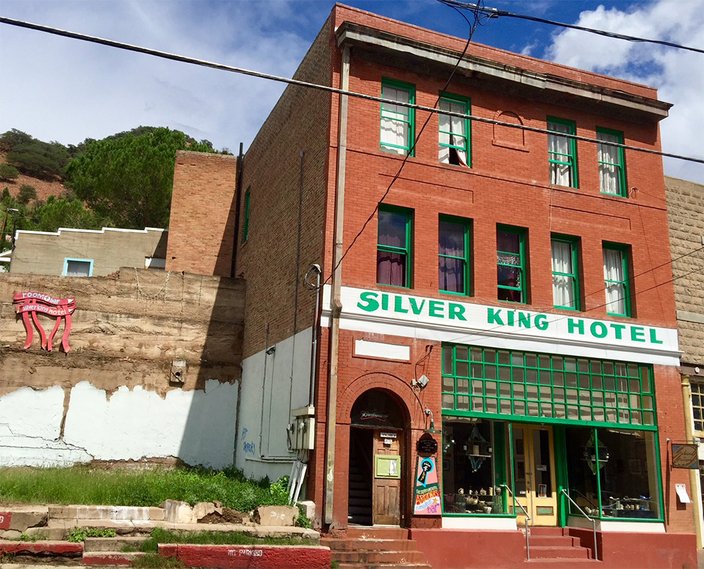 The Silver King Hotel, built in 1900 as a boarding house for copper miners, sits on Brewery Avenue in Bisbee, Arizona. The hotel offers 7 European-style rooms at about $85 a night.

Danielle Martinez grew up in Haverford on Philadelphia's Main Line, attending Archbishop Prendergast in the early 1960s, and going on to study at the Moore College of Art and Temple University. An artist, she lived for a time in New Hope, Bucks County.

She became a school teacher and taught in Mount Holly schools on the other side of the Delaware, and later in the Centennial School District.

By the time the 1976 teacher strike there was over three months after it began, Martinez and her family had moved to Bisbee – the town was recommended as a vacation stop by a friend – and purchased the Silver King. She resumed her teaching career in Arizona.

The road west was paved by an intense dislike for Mid-Atlantic winters.

"I just kind of got tired of driving in the snow," she said matter-of-factly. (Still, Bisbee averages about 10 inches of snow a year.)

An artist and potter, Martinez's works decorate the Silver King.

"The hotel is like my biggest art installation," she said. "A lot of people here have helped me to do it."

Today, it is among the historic hotels and saloons that recall the vivid character of the "Queen of the Copper Camps" during its turn-of-the-century boom days. The entire historic district in Bisbee is on the National Register of Historic Places.

The hotel offers 7 European-style rooms at about $85 night. Guests walk up a steep flight of stairs from the street to the hotel lobby. Up until a couple of years ago, the hotel had a cat named Munchie, who lived to the age of 32, all of its years spent at the hotel. (The property may or may not be haunted, with two murders reportedly on the premises in years gone by.)

Mining operations for gold and copper restarted in 2013 – the dull vibrations under the hotel are only noticeable when they halt briefly, then restart, during shift changes – but by then Martinez herself was shaking things up at the Silver King. 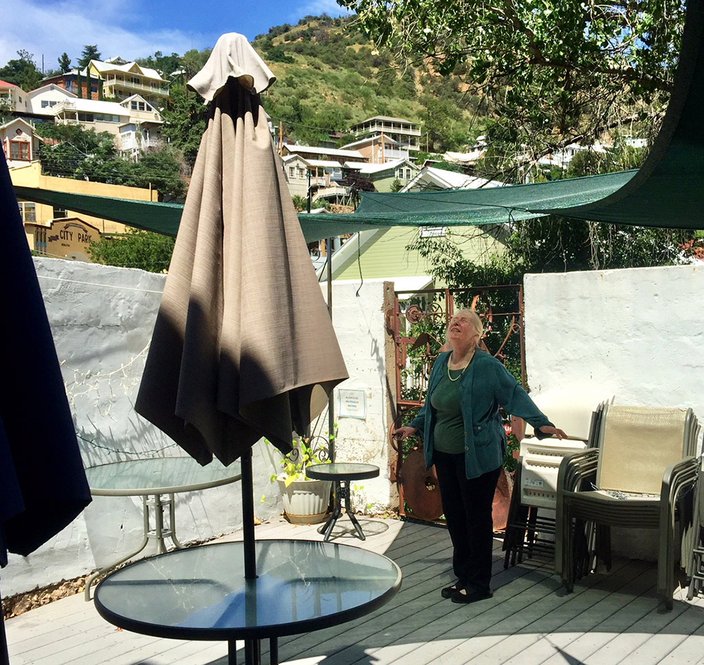 Danielle Martinez, an artist and potter, stands on the deck of the Silver King, which overlooks Brewery Gulch. “The hotel is like my biggest art installation,” she says.

'ALL HOTELS CAN USE A LITTLE BAR'

Danielle Martinez had operated the hotel for 33 years without a bar.

Then, in 2009, her husband Manny was diagnosed with cancer.

With a future of treatments ahead of them, the couple needed to bring in more money to help pay the bills. A hotel bar would do that, she knew, and before long she had purchased a Series 06 liquor license for a "quite reasonable" price "from a guy in jail."

"All hotels can use a little bar for their guests," Martinez said. "We didn't have that." 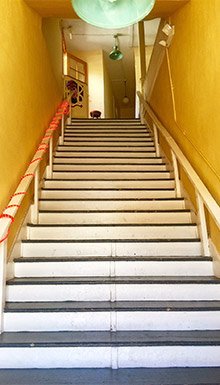 Where to find the smallest bar in Arizona? Up these steps to the second floor, and then down the hall to Room 4.

Because guests didn't like much the three windowless rooms on the second floor, Martinez transformed one of them – Room 4 at the end of the hall – into a bar. A very small bar.

Opened on New Year's Day in 2011, it is perhaps the second-smallest drinking establishment in the United States. (Smallest Bar, on Duval Street in Key West, lowers the bar – to 72 square feet.)

As twinkling lights cast a colorful glow on bottles of spirits, Martinez can be found behind the wooden bar serving cold beer and mixing cocktails.

Though it fits 7 or 8 patrons comfortably, Martinez said on one occasion a record 26 members of a motorcycle gang squeezed in, "but only because the girls were sitting on the guys' shoulders."

Room 4 Bar is popular with guests, many of whom come on the weekend from blazing-hot Phoenix to seek relative comfort in the mountains, where temperatures run about 20 degrees cooler than the desert capital. It attracts its fair share of locals and curiosity-seekers, too, Martinez said.

The establishment is open from 2 p.m. to closing from Friday to Sunday during the summer, when hotel business falls off during the week because of the heat. Beginning Sept. 22, however, the drinks will flow during weekdays, according to Martinez.

When local bands play on the weekends, they play in the larger lobby, but the music travels down the hall.

If there is no room to belly up to the bar, patrons can take a beverage out onto the deck overlooking the Gulch to watch the "crazy people" enjoying the saloons that still line the neon-tinged street, she said.

Martinez doesn't get back to the Philadelphia area anymore. Which suits her just fine, apparently.

She's in the process of building a studio at her home on four acres where she and her husband – who is still fighting cancer – can throw pots to sell. And do some welding.

And there's always a few more drinks to mix and guests to greet at the smallest bar in Arizona.