Jen Hope decided to chase a dream; she's about to learn whether that was a good idea 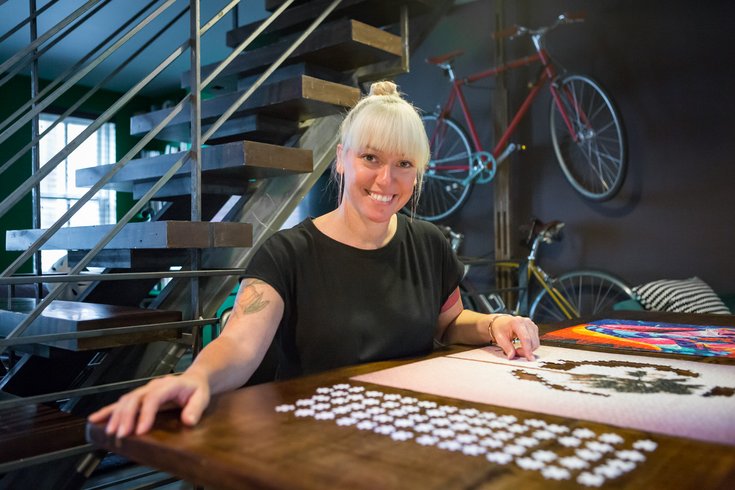 Jen Hope, Puzzler-in-Chief of Puzzle So Hard, in her Graduate Hospital home in Philadelphia.

Just about nine months ago, Jen Hope embarked on a glorious mission that started when she quit her job to chase a dream.

Inspired at a holiday party by several accomplished women who work in non-traditional tech fields, Hope put a long-simmering plan into action. She was about to scratch an itch seemingly as ingrained in her body and soul as her genes.

The first step, of course, was telling her bosses what she had in mind for her, and their, future.

“My supervisor thought I was joking when I said, ‘I’m leaving to go start a puzzle company.’ He was not ready for that,” she said through laughter at a kitchen table inside the home she and her husband bought just before the prices started skyrocketing in the Graduate Hospital neighborhood.

With that, the Huntingdon Valley, Montgomery County native set out like a force-of-nature freight train on an entrepreneurial mission to create “Puzzle So Hard,” a privately held company that licenses artwork from artists across the globe “to provide beautiful and challenging jigsaw puzzles.”

'A FORM OF THERAPY'

As entrepreneurial origin stories go, Hope’s becomes more intriguing with each layer she peels back (even when you set the off-the-record wrinkles aside).

In 2003, she left the non-profit sector in pursuit of a law degree at the City University of New York. Upon graduation, she worked two years at a “boutique labor firm.” Then, she joined the U.S. Equal Employment Opportunity Commission as a trial attorney where, for eight years, she “enforced federal statutes prohibiting employment discrimination.” 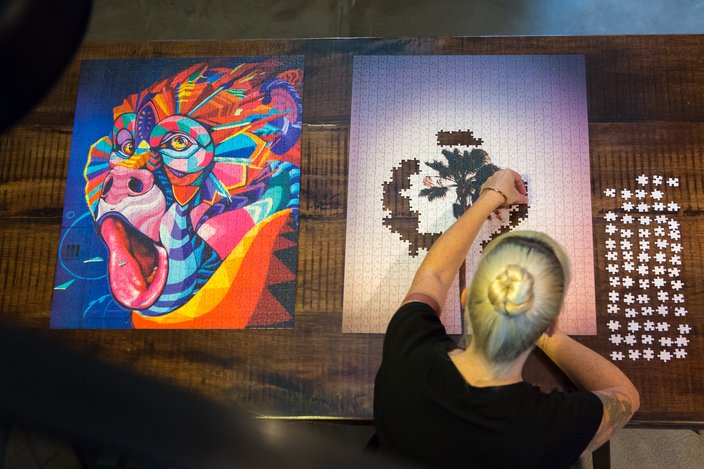 Jen Hope's Puzzle So Hard has 12 varieties so far, with plans to add a children's volume later.

Hope was so married to the job that she and her husband (and fellow attorney) Matt Monroe had to skip a real honeymoon so she could prepare for a trial in Tulsa, Oklahoma.

That religious-discrimination case, the EEOC vs. Abercrombie and Fitch, made its way to the U.S. Supreme Court, which sided 8-1 with the EEOC’s stance that a young Muslim woman was denied employment because of her faith. (It speaks to her sensibilities, both personally and professionally.)

All of which is to say that Hope was quite accomplished in her field.

On the personal side of things, her bloodline coursed with an entrepreneurial spirit. She said her grandfather developed patents for film processing and X-ray machines and, in his obituary, was credited with inventing the “accordion folio for your wallet.”

Her dad was a “pirate” at heart, kayaking from Philadelphia to Jacksonville, Florida in his teens and “manufactured everything under the sun from touch-screen games that you might see in a bar to kinesiology tape and beyond."

"A puzzle was a problem that I could actually solve, unlike everything raging around me." – Jen Hope

Though her brothers were asked to work in his manufacturing plant in their younger years, she wasn't. Still, the seeds had been planted, and were activated when a friend brought a puzzle on a vacation to Fripp Island, South Carolina a few years back.

She’d never been all that much into puzzles, but it clicked with “Type A tendencies” that become quite evident within seconds of meeting her, as she blends laughter, profanity and attentive focus seamlessly as Missy Elliott tracks play on shuffle in the background. (As an aside, she noted she still harbors dreams of being one of Elliott's backup dancers.)

In subsequent years, she and her husband faced “upheaval" in their personal lives, collapsing along MLK Drive after “bricking” during a triathlon and then diagnosed with Crohn’s Disease. And there were more health problems in their families.

“We both experienced what seemed like unending family traumas, as many families do, which left us drained,” she said. The couple, both of whom worked as attorneys, was “also dealing with criminal and civil legal issues for other family members.” 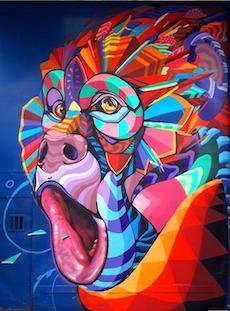 Piecing together all those tiny pieces offered a much-needed escape.

“Puzzles became a form of therapy. A puzzle was a problem that I could actually solve, unlike everything raging around me,” she said. “When you’re looking for a puzzle piece you’re solely focused on colors, patterns and shapes. Everything else just falls to the background and fades away.”

Last year, she started working on puzzles regularly, but found most of them “uninspiring and cheesy.”

In Palm Springs, California for a wedding last September, seeing the first light over the desert stirred something in her, something that told her she wanted to make puzzles as inspiring as that image.

Hope – who considers herself a “saver” financially – came home, crunched numbers and pondered whether it was possible to leave her successful position and live as a one-salary household until the puzzle business got established.

Impatience would speed that process.

On New Year’s, she decided to give notice the next day. In a twist of kismet, even though she hadn’t told Monroe yet, he sent a text that read, “Hey, I love you. Quit your job. #puzzlesohard.”

“I just got tired of fighting over documents,” said Hope, the first in her family to graduate from college. “The stereotypes about lawyers are sometimes true.”

So, quit her job, she did, and Puzzle So Hard was born.

On a table next to a stairwell in the modernized GHo townhome they share with a huge dog named Ponyboy sits a colorfully intense jigsaw puzzle which depicts a Howler monkey mural from Colombia next to a yet-completed puzzle depicting a palm tree.

They’re two of the 12 puzzles currently in production. The puzzles are split across four series: thread art, outer space, natural gradients (like the palm tree) and street art/murals.

They're, at a minimum, eyecatchingly unique in the world of puzzles. Preorders for the $25 products have already surpassed her wildest expectations.

Not having any children affords the couple a financial boost unavailable to many families, and pooling the savings with not going out as often as they once did, helped bolster funds.

Within a few months, she was navigating the waters of the modern e-commerce business world, learning about building websites, coding and stock-motion animation.

She signed up for two consulting programs: the Wharton Small Business Development Center and Common Ground Management. Those experiences, and the people she met therein, helped Hope refine her idea and business plan.

“What do I think makes a great puzzle?” was the question that prompted in her head.

She tracked down artists from across the globe – particularly women in the arts – and reached out via email or social media sites to gauge their interest in signing artist guild-worthy licensing agreements. Very few spurned her creative advances.

Since her twin brother, Jacob, works in printing, it became easier to develop a marbled-packaged binding so the puzzles could sit on a bookshelf, looking decorative as opposed to an odd-shaped box that gets hidden under tables or in cabinets when not in use a la most board games.

On a mission to bring “the pastime of puzzling into the present,” the puzzles feature work from Mexico City mural artist Farid Rueda, South African embroiderer Danielle Clough and, among others, Toronto photographer Patrick Tomasso. 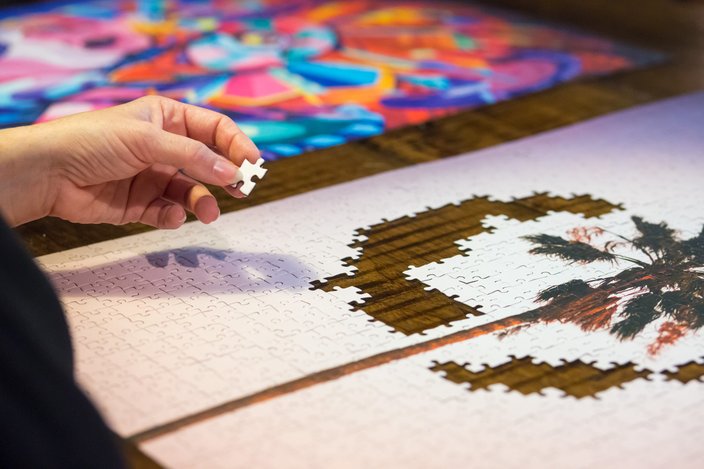 Hope works on one of her 1,000-piece puzzles in her Philadelphia home.

In July, Puzzle So Hard launched an ad campaign in theaters (tied to the release of the movie “Puzzle”) and opened up the dozen varieties for presales via its website in early August.

“The puzzle market is so large,” said Hope, who keeps her toe in the legal ocean with volunteer work of the same spirit she did professionally. “I’m hoping that our puzzles are associated with gifts and home goods instead of toys and games.”

The finished products, which she bills as perfect housewarming gifts, will ship sometime between late September and the middle of October.

“A lot,” is the only figure Hope would put on the “surprising number” of preorders already sent in.

There are plans for pop-up events at The Workshop Underground at 16th and South streets and Puzzles So Hard will be carried at the Thirsty Dice Boardgame Cafe which, when it opens in the fall, will be “the city’s first board-game café.”

That café is a story unto itself, but not all that different from Hope’s.

Matt Hendricks, with a background in management consulting, said the idea for that endeavor came from a “realization, a moment of clarity” while he was out on the road looking at another venture last year.

Having learned of board-game café popularity in South Korea, France and Toronto, he got to thinking about “how to blend that with what I know about Philly.” The over-simplified answer was making the games more player-friendly – think: hospitality and staff helping to eliminate the need for instruction manuals – in a cool environment.

“We want to make it as easy and fun and accessible as possible,” he said, noting that the location at 1642 Fairmount Ave. “has soul."

"There’s a nostalgia that gets evoked when talking about playing board games," he continued. "There’s been a lot of stories about growth in the board-game industry over the past several years. People are realizing that despite boundless access of new technology, there’s really stuff out there that’s ageless.

“That ties right in with what Jen’s doing. People are just looking for things that are real.”

To hear Monroe tell it, his "bad-ass genius" wife is as real as it gets.

"J-Ho is a force of nature who works extremely hard and humbly at everything. No ego and the most hilariously mean sense of humor you've ever encountered," he said.

Puzzle So Hard plans to expand on the first 12 puzzles with future volumes.

Then, tapping into that sense of humor, there could be a series for children called Puzzle So Gross for which she’s already done the market research of talking to kids about “gross” scenarios that could become a puzzle.

"Kids are so creative ... creatively gross. Listen to them!" she advised.

For now, though, she's just waiting to see how phase one of their new life progresses.

“When I want to do something, I do something,” said Hope, who hopes to work with senior and addiction recovery centers to get the puzzles into those environments. “People just have a desire for something just a little bit cooler. I can’t believe it worked. It’s just so cool.”