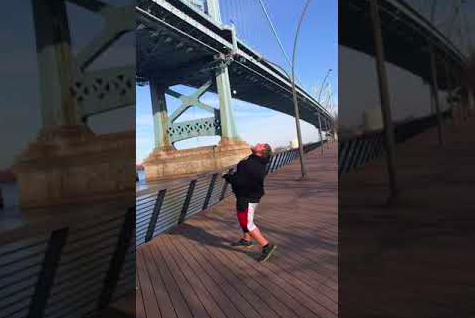 'Fat Mike' catches a marshmallow in his mouth after its dropped off the Ben Franklin Bridge.

There is a man who refers to himself as "Fat Mike." He is located in Delaware County. He is a big fan of Carson Wentz and once trolled LaVar Ball — to his face!

One thing Fat Mike is very good at his catching marshmallows in his mouth when they are dropped from dizzying heights, or even flung at him with a hockey stick or golf club. His talents were recently highlighted on the Facebook page for UNILAD, a humor website based in the United Kingdom. The page put up a video of Fat Mike catching a 'mallow in his mouth after it was dropped from way up on the Ben Franklin Bridge; the video has since gotten more than 500,000 views.

Fat Mike, by the way, is actually 25-year-old Mike Regan, according to Philly.com. His friend Rob Scheetz, also 25, throws the mallows. They were good enough to get to the audition stage of "America's Got Talent," and their appearance will air when the show returns to NBC this summer.

Of course, you can see all of Fat Mike's marshmallow-eating exploits on his YouTube page, "Fat & Proud." Enjoy: