A look at the whimsical botanical art of MF Cardamone 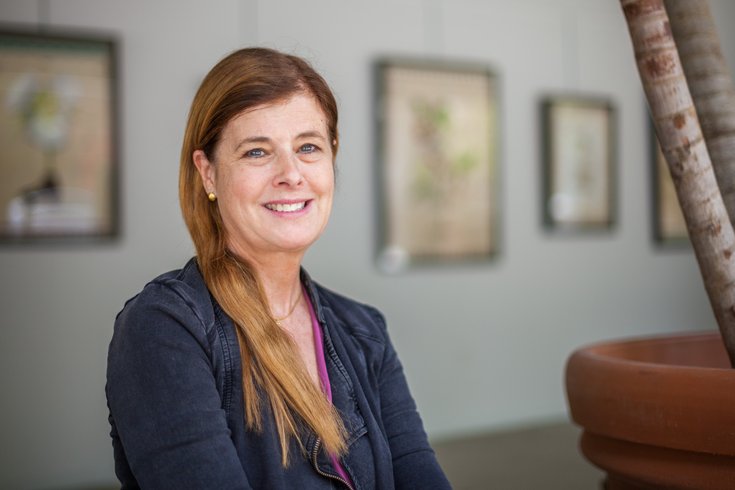 Botanical artist Maryfran Cardamone at the Pennsylvania Horticultural Society's McLean Library. Her exhibit, 'A New American Botanical,' is on display through July 29.

UPDATE: As of June 28, "The Whimsical Art of Maryfran Cardamome" at the PHS McLean Library has been extended through Aug. 26.

Botanical artist Maryfran Cardamone may have grown up in a Mt. Airy rowhouse, but it was the woods of Wissahickon that felt like home.

Cardamone, 57, grew up knowing she had a bit of a green thumb. She wandered through the region's forests, played in creeks and rode horses. All the same, when adulthood rolled around, she instead dove into the realm of fine art until later growing into a full-time role as mom to two boys. It wasn't until she approached the empty-nest stage of life, then, that she sat down and really thought about her interest in nature and how she could transform a hobby — that is, gardening at her five-acre estate on the Main Line — into a sort of artistic lobbying effort. Ready to move on to the next chapter of her life (or "chapters," she cutely clarifies), she married her love of nature with her creative sensibilities.

And just like that, out came the botanical illustrations of MF Cardamone.

"When people see my work, they’re used to seeing this kind of scientific illustration," Cardamone told PhillyVoice, pointing to more literal takes on botanical drawings. "So really, the idea was to take an existing genre, botanical illustration, and bring it into the contemporary world — to fast-forward that idea, honoring the tradition but really giving it a new, fresh way of looking at plants.

"It’s really sort of taking the genre and trying to change it and make it new.”

On May 2, she opens her latest exhibition at the Pennsylvania Horticultural Society's McLean Library, which will now regularly display botanical artwork. Cardamone's exhibit is a compilation of about 15 framed works she's developed since first creating botanical art in 2005, having gone through the Barnes Foundation's three-year horticulture education program. (She's since shown her botanical art at the Academy of Natural Sciences and Bartram's Garden.)

The theme? Advocacy for nature, fused with her knowledge of the five elements of traditional Chinese medicine, pop culture sensibilities and innate whimsy.

“My pieces are a way to advocate for nature that’s very simple, very direct," she explained. "I want for people to walk out and maybe have learned something about nature they didn’t know.” 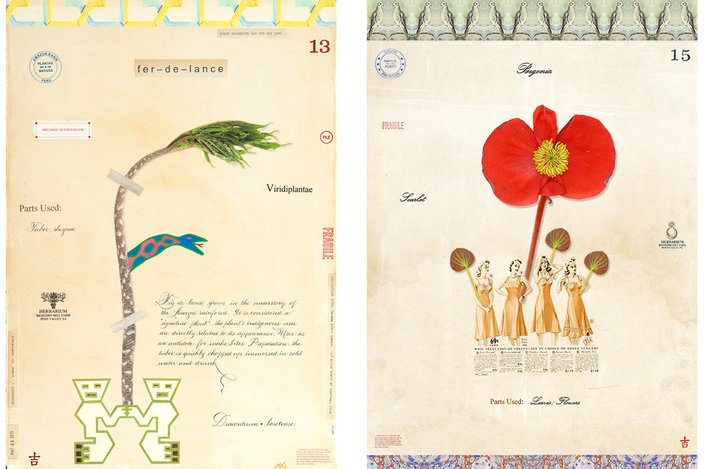 Maryfran Cardamone's 'fer-de-lance' and 'Begonia' pieces, on display at the PHS McLean Library in Center City.

Her work uses mixed media to engage onlookers in a way that is, perhaps, more thought-provoking than merely staring at a typical botanical painting. She combines digital scans of plant specimens she's grown or collected with gouache painting, ink work, digital photography and vintage clips to create what come across as collage-like, juxtaposed pieces that always have a plant or vegetable at their center.

One work, "fer-de-lance," is a product of her journey through the Amazon with a shaman ("My life has been kind of crazy," she laughed). The tree portrayed is a play on the Doctrine of Signatures, a concept in ancient Chinese medicine that theorizes vegetables, fruits and plants that look like body organs tend to have curative qualities. Hence, the snake emerging from the tree — one that's thought to repel the animal.

Another piece, "Begonia," is notably more playful, but still abstract. It takes a scan of the begonia flower and combines it with a vintage ad from a Sears catalog, meant to offer commentary about the impact of flowers on our subconscious — both in advertising and in our everyday interaction with flowers and their colors. 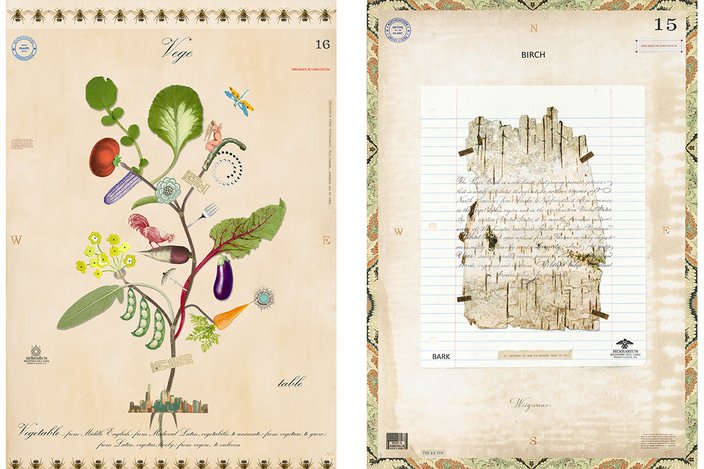 'Vegetable Tree of Life,' left, is a vegetable take on the Tree of Life. 'Talking Paper,' right, is commentary about how we use plants for language.

Other works are more straightforward. "The Vegetable Tree of Life," for example, is just what it sounds like -- a veggie-heavy take on the Tree of Life, rounded out with a Philly flourish tucked into its roots. Though in an abstract sense, Cardamone explained the piece is part of a new effort she's making to incorporate etymology in her work and challenge people to not take a word like "vegetable" at face value — not just a word used at the supermarket, but in botany as well.

"Talking Paper," meanwhile, demonstrates the evolution of bark as a means of communication, contrasting birch bark — once used for Buddhist manuscripts — and the notebook paper most are familiar with today. From "sacred scrolls to popsicle sticks," she quipped. 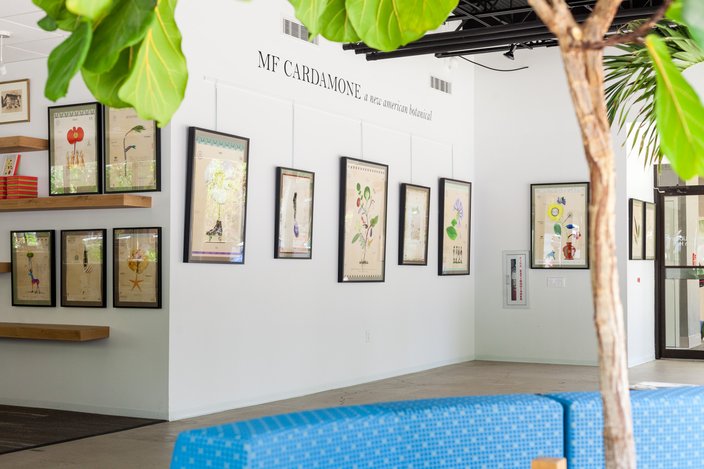 Taken as a whole, the exhibit is a showcase that attempts to educate as much as entertain.

"I want people to look at [my pieces] and smile and go ‘Oh, my God!’" she said. "It's taking 'What have plants become? What do we know about them?' and putting things into perspective a little bit. And trying to be true to the science in some ways — ecology — but also giving plants a culture, a home, a sense of place and combining that with my love of the medicinal parts of the plants.

"This work is my love of nature. It's an expression of the love."

"A New American Botanical" will be on display from May 2 through July 29. Fifty percent of sale proceeds from her botanical prints will be donated to the Pennsylvania Horticultural Society's City Harvest program.