Staff at the Cosmopolitan resort threatened to have the Philly rapper arrested for trespassing Saturday, but hotel management says it was a capacity issue, not race 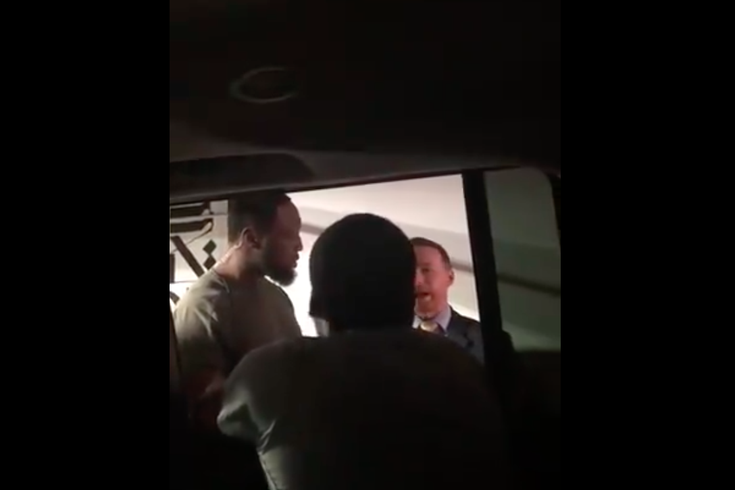 Meek Mill says he was denied entry to the Cosmopolitan hotel in Las Vegas on the basis of race in two videos of the incident posted on Twitter, however the hotel is alleging it was due to capacity issues.

Meek Mill posted videos of an incident at the Cosmopolitan hotel in Las Vegas after he was denied entry and threatened with arrest for trespassing.

The Philadelphia rapper was trying to enter the hotel with two members of his security on Saturday afternoon but was turned away by Cosmopolitan officials before he got out of his car, TMZ reported.

"How can you tell me I'm gonna be locked up on trespassing?" Mill asks two hotel employees in one Twitter video.

"Here's the deal," a hotel employee replies. "We're a private property, at this time, with the information we have, we're refusing to do business with you. We have a right to do that."

"If I walk upstairs to get something to eat, I'm gonna be arrested for what? For being a rapper?" Mill then says.

Just before posting the videos, Meek accused officials at the Cosmopolitan of being "racist as hell" in a tweet.

The cosmopolitan hotel .... and it’s a few other hotels that be doing this to black entertainers because they don’t want too many blacks on they property! Vegas notorious for this too its not just me!!!! pic.twitter.com/HPySp2nh8h

If you come from our culture you should never step foot in the cosmopolitan hotel they just really racist as hell .... something really has to be done in Las Vegas what they doing to black people!

The Cosmopolitan released a statement on the videos, saying the incident was a "matter of security, not race."

"The recent situation regarding Meek Mill related to a matter of security, not race, and any reports citing otherwise are false," the hotel's management said. "We pride ourselves on providing an inclusive environment, with zero tolerance for discrimination. Under different circumstances, Meek Mill would be welcomed to the resort, but not at the compromise of his personal safety and the safety of our guests."

CNN reported the hotel knew of Meek's arrival in advance and that security told the rapper he would not be allowed into the Cosmopolitan's Marquee Dayclub because of capacity issues.

Neither video of the incident shows the hotel officials telling Meek the club was filled to capacity.

Meek's lawyer, Joe Tacopina, sent a letter to the hotel, which TMZ reported accused the Cosmopolitan of maintaining a "list of African American recording artists who should be denied access for no other reason than their culture and skin color. Such course of conduct constitutes discrimination per se, in violation of state and federal law, and exposes you to significant monetary damages."

The letter goes on: "We urge you to promptly issue an apology to Mr. Williams (Mill's last name) and grant him immediate access. In the event you fail to heed this one and only warning, we intend to pursue all legal recourse against you."