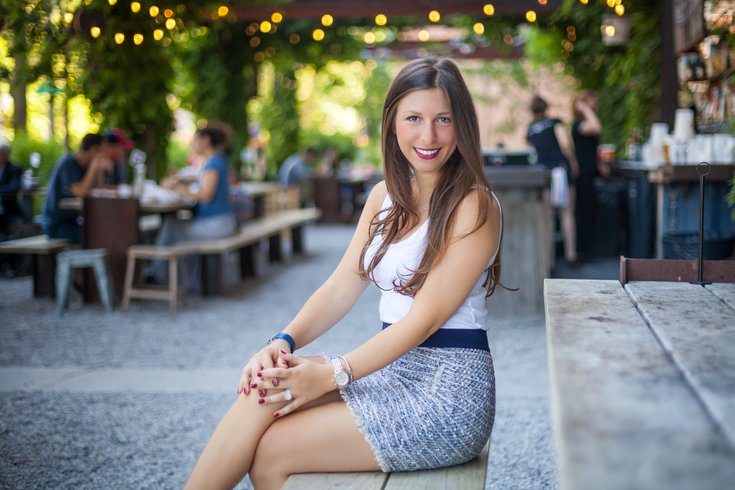 Senior Matchmaker, Erika Kaplan at Independence Beer Garden in Philadelphia. Kaplan utilizes coffee shops, bars and social events to meet with her clients around the area.

"To call it a job just seems silly, because it’s kind of a lifestyle choice," the 26-year-old Kaplan told PhillyVoice while lounging in the lobby of Hotel Palomar just before a client meeting. "You can’t go to pilates class in the morning and not keep your eyes peeled for a great girl your client might like, or go out to dinner with your husband and not say 'Hi' to a cute guy at the bar because he doesn’t have a wedding ring on.

"I've said it before and I'll say it again: You have to be shameless to do our job."

Kaplan, a Penn State alum, kicked off her matchmaking career in 2014 after working in public relations at Rolling Stone — a predictably "glitzy and glamorous" job, she said, that was satisfying but left her wanting for a more impactful day-to-day experience. When a colleague, who she'd previously set up on a date, told her about a job opportunity at Los Angeles matchmaking company Three Day Rule, she was hesitant but curious.

"I said to my husband, 'That's crazy! I can't be a matchmaker!'" Kaplan said, laughing. "He said, 'You kind of already do it anyway. Why not take the interview?' So I did and it was just a really natural, organic fit."

Here's how it works: Three Day Rule, which directs a legion of matchmakers in New York, Los Angeles, Washington, D.C., San Francisco, Boston, Chicago and now Philadelphia, equips matchmakers with best practices at an intensive one-week training session in L.A. Those matchmakers then disperse to their assigned cities where they conduct intake meetings with interested clients — essentially, 40-minute get-to-know-you coffee meetings that, themselves, feel like dates.

Regardless of whether those result in sign-ups (in Philadelphia, Three Day Rule is pricey at $4,500 for three months or $6,000 for six months), those singles are then entered into a database of singles, available to be matched with clients based on intake notes. Those who do sign up have, more or less, 24/7 access to their matchmaker, consistent check-ins and are — and this is the kicker — paired with people the matchmakers have vetted in person.

In short: They go on your bad dates so you don't have to.

Two years in and fresh out of shepherding the New York singles market, where she began, Kaplan is taking a deep dive into what she calls the "fragmented market" of singles in Philadelphia.

As part of her gig, she spends the bulk of her time mixing and mingling at Philly social and networking events, on the prowl for bachelors and bachelorettes to add to her repository of Philly singles. On a random occasion, you'll find her at a special event like a recent Roche Bobois luxury living party; on a more regular basis, you'll catch her elbowing singles at the bar on Wednesday during Center City Sips.

"I find happy hours are pretty high-yield — it’s really low-pressure, and people are usually more available there, rather than a networking event where they're strictly there for business," Kaplan said. "I'm happy to approach someone who may or may not be single, but if they're not, they're more than welcome to tell me about their single friend; they're always happy to throw a friend under the bus."

Stein: There's the partner on paper and the partner in real life. And I think there has to be a whole lot of self-knowledge in order to successfully pick a partner, and most of us don’t know ourselves that well or think ideally about marriage or partnership.

Kaplan, who in person is as attentive and perceptive as any friend you've had for years, describes her services as ideal for people who are busy professionals and aren't keen on spending their free time swiping left or right. In Philadelphia, she said, her clients tend to be late-20s to early 30s (through early 50s) and "burnt out" with online dating — which, of note, has seemingly broken through the stigma barrier in recent years, as 15 percent of all U.S. adults have now used an online dating service, according to a Pew survey. More than half see it as a "good way to meet people."

Which is to say that it may not be that people are "burnt out" with online dating, per se, but merely frustrated victims of their own biases — online or offline.

"One of the pitfalls with online dating is that the partner people think they should have isn’t the partner they actually want to have," Emma Steiner, a therapist at the Council for Relationships told PhillyVoice, cautioning that this happens in standard dating as well, but most prominently with how we present ourselves in online profiles. "There's the partner on paper and the partner in real life. And I think there has to be a whole lot of self-knowledge in order to successfully pick a partner, and most of us don’t know ourselves that well or think ideally about marriage or partnership.

"The difference with the matchmaker," she added, "is it takes your own personal biases and the skewed lens you may be looking through, and it takes that away. Because there’s another person coming from an objective place."

Joe, a client who works with Kaplan in New York, explained that there's simply more of a "seriousness" he experiences with his TDR dates than with anyone he's met online or through setups.

"There's a different intention when I meet somebody Erika introduces me to than would otherwise be the case on, let’s call it your typical garden variety online-generated date," he told PhillyVoice. "When it happens through a matchmaker service, there’s just a different intention on both sides.”

For him, he said, matchmaking has filtered out intangible qualities he couldn't sift through on his own. In practice, he has yet to meet a permanent match but clarified that he's made friends and met women who he shares a "deep compatibility" with.

“We’re literally doing this manually, which is unheard of," Kaplan said. "We can see it with our eyes; we actually meet everybody in person, so it’s not just based on what I’m looking at on an online profile — it’s based on how that person interacts with people. If we order coffee, was he nice to the waiter? What is his stance on religion and politics? Is he open to dating outside his ethnicity? Does he seem like an open-minded person? It’s all these intangibles that you can’t even claim to filter out online."

Importantly, she remarked, some success stories aren't measured by whether they end up in a relationship, but how comfortable they are with dating after their six months is up.

One client, she remarked, was petrified of dating in the beginning, but has since acquired enough confidence to not only go on dates but be more honest about what characteristics he wants from a partner — to seek out not just a relationship, but a lasting one. And the distinction is what might make matchmaking so valuable.

"Relationships — at least, good relationships — are a cornerstone for a happy life, for a lot of people," she said, smiling. "We’re able to help them get there, and that's really cool. That’s what matchmaking is.”