Activists will make case for increase to $15 an hour 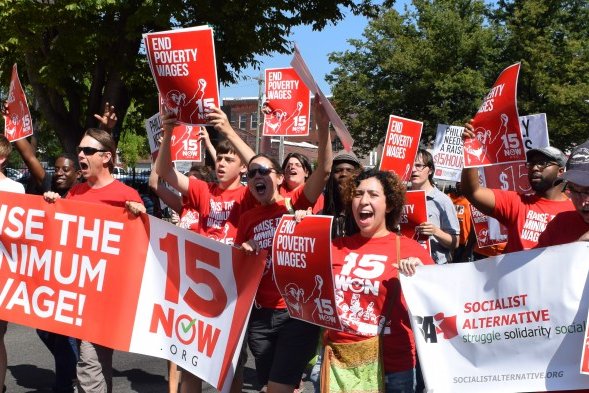 According to 15 Now Philly's website, the hearing has been organized to make the "economic, moral, and legal case for implementing a significant raise in the minimum wage." The event is being hosted along with 32BJ SEIU, a national union of property service workers that is concentrated in the northeastern United States, and Fight for 15, an SEIU campaign organizing fast food workers into a union.

Kate Goodman, an organizer with 15 Now Philly, says that the organization's efforts to present their case to City Council proved futile until Councilman Kenyatta Johnson appeared at a rally outside City Hall in November of 2014.

Councilman Kenyatta Johnson stands with our fight to #RaiseTheWage! Now where's the rest of city council? #15In15 pic.twitter.com/GkTVQIOuZO

Goodman said that appearance led to a working relationship with Johnson's office, which led to the group's March hearing. The hearing will be held in front of the committee of commerce and economic development, of which Johnson is a member.

Before that, Goodman said, "City Council pretty much ignored us."

While the 15 Now Philly is centered around the goal of raising the minimum wage to $15 an hour, Goodman notes that the hearing has a broader goal.

"The hearing is intended to challenge city council and the mayor to work with 15 Now to find a way to raise wages for as many Philadelphians as possible," Goodman said in an email.

The organization is asking those who support their cause to RSVP to the event and show their support by filling the chamber of City Hall during the hearing.

The fight to raise the minimum wage in Philadelphia alone may prove to be a tricky one, as the last time Pennsylvania's state law on minimum wage was updated in 2006 to $7.25 an hour, a preemption clause was included. This clause states that:

...this act shall preempt and supersede any local ordinance or rule concerning the subject matter of this act.

Yet 15 Now Philly's legal team put together a memorandum concerning this clause, making the case that this portion of the law may not strictly prohibit increasing the minimum wage in the city. From the memorandum:

As the Declaration of Policy indicates, the General Assembly implemented the MWA to protect workers from “the evils of unreasonable and unfair wages,” to improve workers’ “bargaining power,” to guard against “the depression of wages,” and to bolster the “purchasing power” of employees.

This is important, the memorandum states, because it may undercut the argument that the ordinance is meant to stop local increases in minimum wages:

Essentially, the memorandum argues that the intent of the law is to help workers and their bargaining abilities, and barring Philadelphia from raising their minimum wage is contradictory to that intent.

Goodman said that keeping a city with poverty issues like Philadelphia from acting on wages is counterintuitive, and City Council should try to act despite the clause.

"We want them to think creatively and find a way around it," Goodman said.