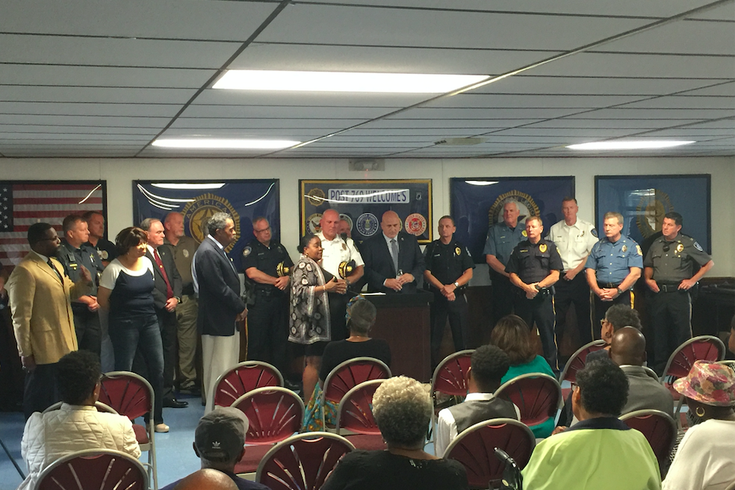 Police chiefs from 13 municipalities across Montgomery County joined with the Ambler Branch of the NAACP for a community meeting on Monday, August 26, 2019. They hoped to build stronger relationships with those they serve in the wake of a story about racist or otherwise offensive Facebook posts from officers in several of the municipalities.

Three weeks after news broke of offensive social-media posts from a handful of Montgomery County law-enforcement officers, chiefs from 13 departments joined with the Ambler branch of the NAACP and others to show a “unified front” to establish better relationships between police and the communities they serve.

It was a story that threatened to strain those relationships, but the scene on Monday night at the Ambler American Legion Post was one of cooperation and a desire to move forward in a positive sense.

“It has been a blessing to have gotten to know these chiefs who are standing with me. I have the highest regard for their dedication, integrity and their willingness to be receptive to me, my executive committee and the community members we serve,” said Carmina Taylor, head of the Ambler branch.

As Taylor spoke, she was flanked by chiefs from the departments that serve communities in her branch’s coverage area. (They were from departments in Ambler, Franconia, Hatfield, Lansdale, Lower Gywnedd, Lower Salford, Montgomery, Souderton, Telford, Towamencin, Upper Dublin, Upper Gwynedd and Whitpain.)

The posts from the Aug. 7 story were prompted by a watchdog group’s investigation into the social-media activity of officers from across the county. Chiefs from several of the jurisdictions present were not mentioned in that story, but they joined the effort.

A joint statement shared on behalf of police departments in the area noted that the chiefs were proud to stand together “with our partners from the Ambler Branch of the NAACP to highlight a spirit of cooperation and forward thinking.”

“Many doors have been opened and many opportunities still await our consideration,” it read. “We are confident that we will continue to build trust and harmony within all of our communities.”

Taylor noted that the group – which will work together over the next two months and beyond – will reconvene on Nov. 14 at a “Chief’s Cadre Meeting to report back to our community the action steps that will occur after today.”

She hoped that this effort would prompt similar ones in other areas of the county.

The meeting, which lasted about an hour and was attended by several dozen residents and a handful of elected officials, featured questions from the audience.

They focused primarily on how the departments could go about diversifying their police forces, and better connect with youths, who may be fearful of officers instead of appreciating their serve-and-protect missions. 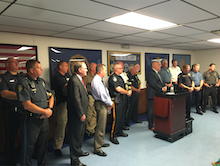 The chiefs from across Montgomery County field questions from the audience.

The chiefs spoke about the difficulty of hiring minority officers both because of competition between the departments and the small number of applicants. They’ve taken steps to mitigate that by attending job fairs and reaching out to schools from across the region.

That reality came starkly into focus when they were asked for a show of hands of any department that had more than one minority officer on their force. Not a single hand went up.

Lansdale Police Chief Michael Trail noted that establishing relationships, like they were on Monday night, was a great move toward putting a better face on the police/community connection and “creating an environment where people want to become police officers.”

While they can’t go back and change history, the group noted that this is about determining how best to move forward into the future.

“Next meeting, bring your sons, daughters and grandchildren,” Hatfield Chief William Tierney said. “Two groups are coming together here to look out for each other.”

For her part, the NAACP’s Taylor couldn’t have been happier about how the event turned out.

“This is not just lip service,” Taylor said afterwards on behalf of the group. “We’re really doing something here. Today is about taking action in moving forward collectively, transparently and respectfully.”