In wake of controversial findings, 13 police chiefs will attend, and work beyond, an August 26 press conference 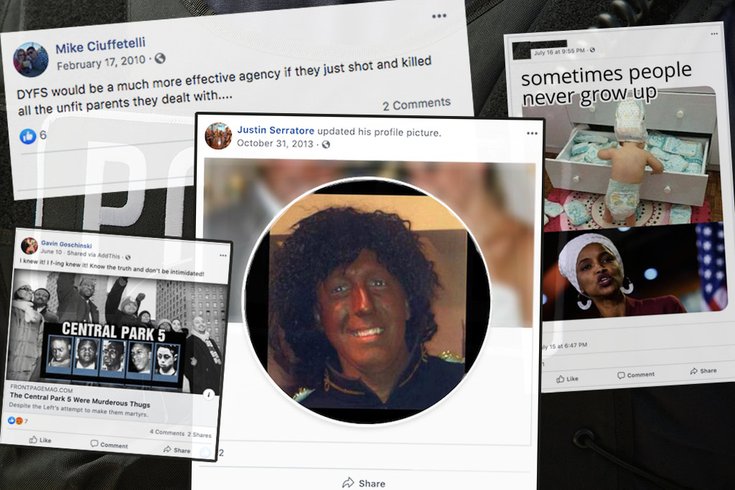 Some of the offensive Facebook posts by law enforcement officers in Montgomery County.

The head of the Ambler branch of the NAACP announced Thursday that local police chiefs will join her for a “Unified Front” press conference to announce steps designed to turn the recent controversy over officers’ racist and otherwise offensive social-media posts into “a teachable moment.”

Carmina Taylor said chiefs from the 13 municipal police departments in the area served by her branch have committed to attending the August 26 event, which she hopes will be a springboard to rebuilding relationships between the community and police.

“We stand affirmed in this significant teachable moment as civil rights activists,’” Taylor told PhillyVoice on Thursday afternoon. “This is a teachable moment to work with our respective police departments to address the impact of public distrust when officers are not aware of explicit or implicit biases.”

Taylor's impetus to organize the event was prompted by an August 7 story on PhillyVoice chronicling a Montgomery County watchdog group’s investigation into public social media posts made by law enforcement officers across the county.

That group – inspired by the Plain View Project’s similar work in Philadelphia and other cities across the country – shared screenshots of 132 posts from 32 officers in 22 departments across the county.

Many did not rise to the level that saw officers in Philadelphia disciplined or fired, but several did.

Among several others, they included:

• An Upper Moreland officer decrying those who support allowing “our government to flood our nation with Muslims.”

Officials from many more agencies across the county said the project prompted them to review, and reinforce the importance, of their social media policies and practices.

As of now, the August 26 event does not include five other NAACP branches – Norristown, Pottstown, Cheltenham, Willow Grove and Main Line – in the county.

“We’ll set the standard,” said Taylor, noting that other branch presidents have established relationships with departments in their jurisdictions. “I have the most police departments in my area, and all 13 have told me that they’ll work together on this.”

To that end, a conference call is scheduled for next week to discuss, among other things, complaints about African-American children disproportionately facing contact with police in local schools.

“We’ll examine social media policies that are in place and what we can do to improve them, talk about how we can potentially pilot some bias training for officers, and work on a community relationship-building agreement that’s agreeable to all of us,” she said. “I think this is going to be huge, to show a unified front, and a unified effort."

Taylor noted that the "formalized community relationship building agreements (will assure) our communities that they will be equally received and responded to when reaching out to their police departments."

She said the group plans to work on those efforts in September and October, with a follow-up press conference tentatively scheduled for November 14 to share results.

As for the upcoming event, the Ambler branch's press conference will be held at 6:30 p.m. on August 26 at the Ambler American Legion Post, 351 Maple Ave., Ambler.