Over 60,000 New Jersey residents still without power after Monday's storm

Over 2,000 residents in the Philadelphia region are still experiencing power outages 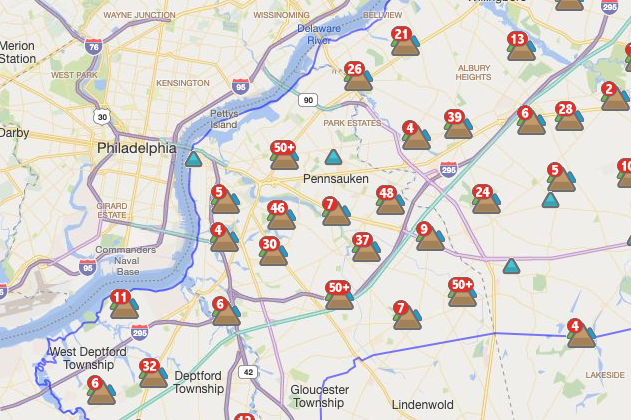 Over 60,000 residents in New Jersey are still without power on Wednesday morning after a storm on Monday caused outages for over 360,000 homes and businesses. There were over 12,000 residents covered by Public Service Electric and Gas Company still experiencing power outages.

Over 60,000 residents are still without power across New Jersey after Monday night's storms wreaked havoc across the region.

The approximate 61,000 customers still affected by the power outages on Wednesday morning include over 48,000 residents in areas designated by the Jersey Central Power and Light Company, according to a report by NJ.com. Most of the residents affected were in Monmouth and Ocean counties. Over 12,000 residents were mostly affected in Burlington and Camden counties, areas covered by the Public Service Electric and Gas Company, according to AP News.

MORE NEWS: Irishman has called Philly area home since '07, but ICE wants to send him back

It could be as late as Friday before residents see their electricity restored, though the Board of Public Utilities noted that it could go late into the weekend, according to the report.

Over 360,000 homes and business were affected by Monday's storms, causing electrical outages throughout the state. Philadelphia and New Jersey saw gusts of up to 65 mph.

Over 234,000 New Jersey residents were still affected by the storm on Tuesday. Over the past 24 hours, crews have worked over night to bring those numbers down.

As of Wednesday morning, more than 2,000 customers remain without power in the Philadelphia-area.