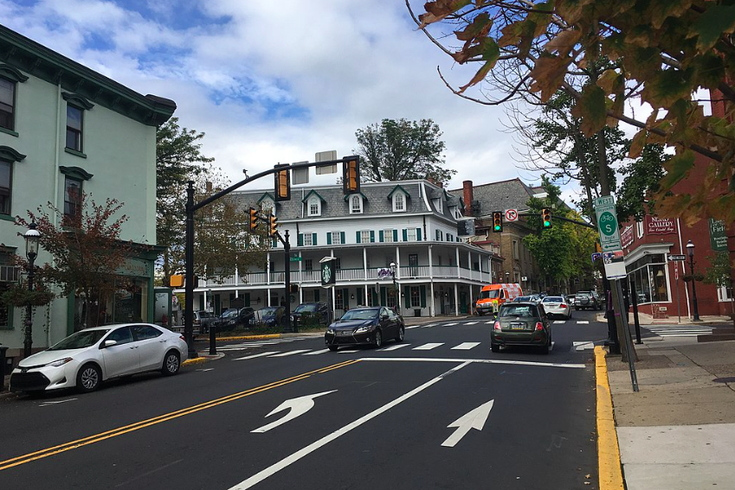 A massive storm cloud swung down on Doylestown, Pennsylvania on Monday, July 22, 2019. The phenomenon may have been a microburst, a localized downdraft that can occur during thunderstorms. Doylestown's Main Street is pictured above.

The heat wave that has had a grip on the Philadelphia region and beyond may have met its match on Monday afternoon.

Strong gusts of wind and torrential rain swept through Center City between 5-6 p.m. as the Philadelphia skyline vanished behind cloud cover and precipitation.

But some of the worst of Monday's storm may have hit Bucks County, where an ominous photo from just south of Doylestown shows what appears to have been a microburst. Drone storm chaser Ray Leichner of the Eastern PA Weather Authority shared an incredible photo and video of the phenomenon.

A microburst is defined as a "localized column of sinking air (downdraft) within a thunderstorm," usually less than about 2.5 miles in diameter at the largest. They can be incredibly destructive and potentially life-threatening on the ground, as recent microburst reports from elsewhere in Pennsylvania, Virginia and Michigan have made abundantly clear.

More than 7,000 PECO customers were without power in the Philadelphia region as of 7 p.m.

Many across the region shared photos and videos of Monday's storm.

Check out these 90-degree-angle #storm #clouds as the first wave of thunderstorms approach #Philadelphia. pic.twitter.com/Co2DflEG6r

Wet weather is expected to continue into Tuesday with lower temperatures than we've seen over the past week, according to the National Weather Service. The rain will let up during the second half of the week with highs in the upper eighties and low nineties.