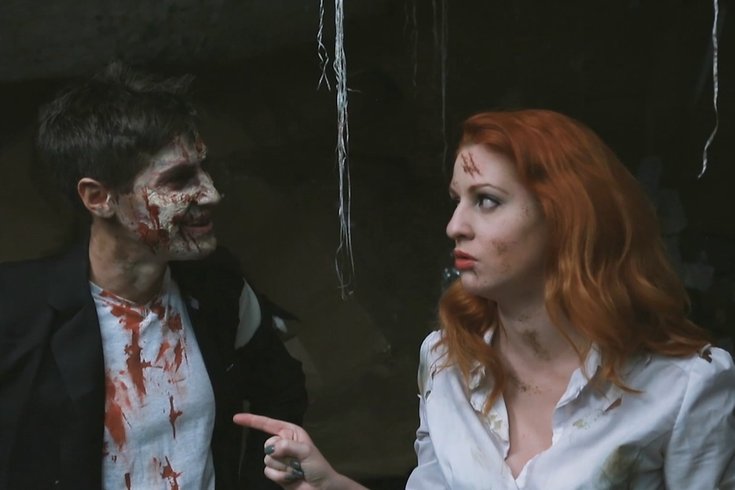 Texting during a movie is usually a sure sign of boredom. But according to Madeleine Koestner, the frequency with which she and co-director Alex Gardner lit up each other’s phones was a reliable indicator of whether a film would make the cut for the inaugural Philadelphia Unnamed Film Festival (PUFF).

“If I was watching a screener and at any point I was pausing it, taking my phone out and texting Alex, ‘The craziest thing just happened in this movie,’ we knew that was something that we wanted to watch with a group of crazy people in Philadelphia,” Koestner says.

The weekend-long festival of cult and genre films, with a focus on horror, action and sci-fi fare, kicks off on Thursday with a free screening of the short film “Small Talk,” about a phone sex operator whose clients begin dying under mysterious circumstances, followed immediately by the opening night party. Both will take place at the South Philly café and video rental shop CineMug, where PUFF has been hosting monthly screenings in the run-up to their first full-fledged festival.

Koestner, a “Fangoria” contributor who recently relocated to San Francisco from Jersey, and Gardner, a Philly-based pop culture blogger, co-founded PUFF to help share their love of genre films they felt were being neglected by more mainstream festivals. “I love traveling the country and going to all these festivals, but you wind up seeing the same movies over and over again,” Koestner says. “We wanted to find films that wouldn’t get into Sundance because they weren’t made by people who are known and they had small budgets and they were too weird or too gory.”

“We wanted to find films that wouldn’t get into Sundance because they weren’t made by people who are known and they had small budgets and they were too weird or too gory.”

The six features and 22 shorts that make up the PUFF line-up certainly fit that criteria, perhaps none more than the gross-out horror comedy “ Night of Something Strange,” which culminates Friday night’s program. Koestner refers to the film, which follows the outbreak of a mutant STD virus during an ill-fated spring break fling, as “maybe the best Troma movie from the past couple decades that wasn’t made by Troma,” which should suffice to encourage or deter those familiar with the infamous studio’s output. (If you’ve never seen the likes of “The Toxic Avenger” or “ Poultrygeist: Night of the Chicken Dead,” Koestner promises “people getting torn apart, bodily fluids everywhere, sex zombies — I was joking that we should hand out barf bags during the movie.”)

Friday’s schedule also includes “Egomaniac,” a British feminist meta-horror about the struggles of a female filmmaker, and slasher whodunit “ Dead Body.” Saturday’s program includes a block of international short films, “Bad Blood,” an amphibious twist on the werewolf film; paranormal thriller “We Go On,” about a man trying to find proof of life after death; and gonzo Japanese martial arts actioner “ Karate Kill.” The festival concludes on Sunday with an evening of local shorts films set and produced in the Philly area.

“We got way more local submissions than we expected to,” Koestner says, “and some of them are really crazy. “I cannot wait to meet the filmmakers because I want to know what their brains are like.”

Koestner’s own brain locked into horror films during her high school years as a way of overcoming a surfeit of phobias. “I was a huge wimp,” she recalls with a laugh. “I was scared of literally everything, so I used horror movies as my way of harnessing that fear of everything.”

While she throws around words like “gory” and “weird” and “crazy” to describe the movies that she and Gardner chose for PUFF, Koestner looks for something a little deeper, a vein of social commentary running through the ruptured veins on screen. “I like movies that have ideas in them. I think horror is probably the best way to comment on the world and how you’re feeling without saying it directly. It’s reactionary, it’s extreme.

You can make a monster movie where a monster kills a bunch of people, and that’s all fine and good. But if there’s a feeling or an idea surrounding that monster that makes it scarier or more interesting, but also the movie is nutty and feels like a party, that’s the best thing in the world to me.”

Koestner hopes that the festival itself captures some of that same mood. Turnout for the monthly PUFF series has ranged from an intimate 15 people watching the ‘80s Full Moon non-classic “Sorority Babes in the Slimeball Bowl-O-Rama” to such a packed house for the recent slasher throwback “ Lake Nowhere” that Koestner had to take the visiting cast and crew out for drinks to make room while the movie ran. Koestner hopes to generate a sense of community through these events, touting the free beer and pizza at the opening night party with as much enthusiasm as she gushes over the films’ piles of dismembered limbs.

“The movies are the reason we’re all getting together, but we don’t want it to be at all pretentious or boring,” she insists. “We want to nerd out and drink beers and laugh really hard. We’re trying to create this party environment where we all shut up and watch a movie together and then we all go nuts afterward.”