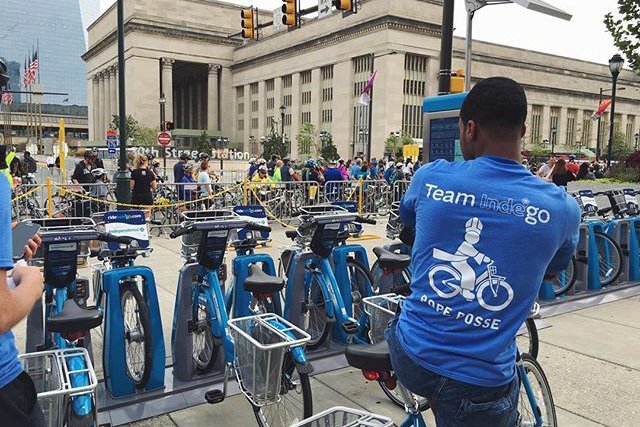 It's been a good week for Indego.

Over the weekend, car-free streets during the papal visit led cyclists to try out the little blue bikes in record-shattering numbers – and that was with almost one in five stations closed.

Then, on Tuesday, the nonprofit bike-sharing service announced that it's getting its first bank sponsor.

Capital One will sponsor 10 bike stations, and it will also offer customers $5 off the first month of Indego if they use a 360 Checking by Capital One debit card.

In addition, until Oct. 29, Indego members will get half off any drink at the Capital One Rittenhouse Cafe. They just need to show their Indego Key to get the discount.

Denise Goren, director of the Mayor's Office of Transportation and Utilities, said that Indego operated "seamlessly" during the papal visit. While Indego did have to close 15 of its 72 stations, it sent staff to four hotspots in Center City to answer questions, make repairs and ensure that bikes were always available.

"We were thrilled to greet new riders at the corrals," said Goren.

Cyclists took more than 13,000 rides from Friday to Sunday, around double the usual weekend numbers. There were 5,300 rides on Sunday alone, a 134 percent increase over the previous one-day record.

To take advantage of the $5 membership savings, Capital One customers should go to RideIndego.com, click on "Become a Member," then select the Indego30 membership option. Use the first six digits of the debit card as a promo code.