On Friday, we eulogized the Cowboys after their embarrassing Thanksgiving Day defeat at home to the Los Angeles Chargers. With the rest of Week 12 in the books, we have another obituary to write this morning. 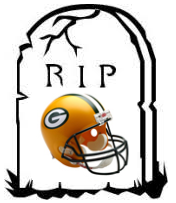 Over the last three seasons, the Green Bay Packers have owned the NFC East in the playoffs, almost serving as something of a savior for Eagles fans who did not want to see their NFC East rivals do any damage in the postseason.

This season, the Packers won't be raining on the parade of the NFC East Champion, whoever that may be (I'm thinking the Eagles, probably). The Packers started 4-1 with a healthy Aaron Rodgers, but after they lost him early in Green Bay's Week 6 loss to the Vikings, the Packers have gone 1-5 since.

Prior to the Packers' Sunday night loss to the Pittsburgh Steelers, Rodgers was throwing 50-plus-yard passes with little effort, just a few weeks after his surgery:

Impressive sight! @rothchris and I both intrigued by @AaronRodgers12 throwing pregame here in Pittsburgh, 54 yards of air on that ball @WBAY pic.twitter.com/JsLQdTFfmW

Would he have returned in time for the playoffs, had the Packers made it? Maybe, but they're buried in too big of hole to find out. The Eagles will have to deal with Rodgers in 2018 and beyond, but not anytime sooner.

8) Lions (6-5): The Lions now have a hurt quarterback and a divisional loss to the Vikings after Thanksgiving, however, they don't play another opponent the rest of the way that currently has a winning record.

7) Seahawks (7-4): The Seahawks have been an NFC bully for the last half-decade, but they appear vulnerable, having lost two straight games at home. And now they have their toughest opponent of the season (the Eagles) coming to Seattle this Sunday. The Eagles would love nothing more than to beat this team that was openly enjoying kicking the Eagles' asses in their Week 11 matchup last year.

6) Panthers (8-3): The Panthers have to travel to New Orleans to take on the Saints Week 13, and then they play the Vikings at home Week 14. Let's see it, Carolina.

4) Falcons (7-4): The Falcons remind me of the little Japanese guy in the Simpsons' mob wars episode, where Homer is waiting for him to do something.

That was Atlanta over the first half of the season. The Falcons have since woken up and are playing some good football. They have games at home against the Vikings and Saints over the next two weeks.

2) Saints (8-3): On Sunday, the Saints were without both of their starting corners, and lost a road game to a good Rams team. That has not swayed me from the belief that they are the biggest threats to the Eagles in the NFC playoffs, but certainly, the two-game cushion helps the Birds' chances for a first-round bye.

1) Eagles (10-1): The Eagles have not played a fourth quarter that has mattered since Week 6. Every week, they are blowing out their opponent. The schedule gets a little tougher this week, when the Eagles will play road games in Seattle and Los Angeles. Against the Seahawks, the Birds opened as SIX-POINT (!) road favorites. Crazy. (That line is now down to 4.)