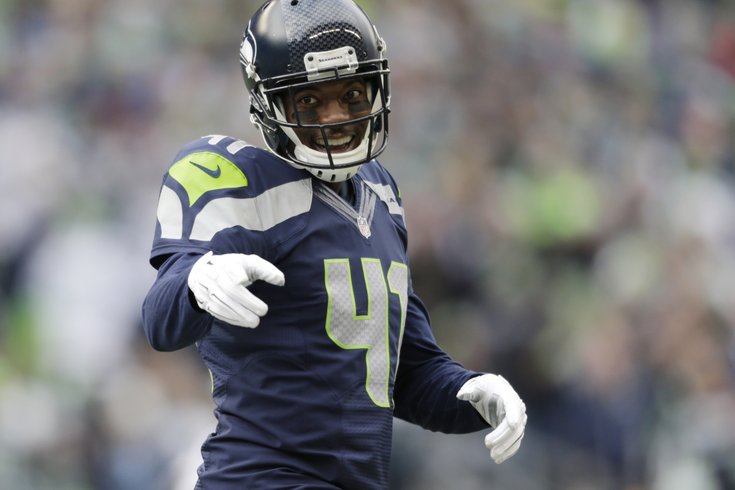 Seattle's Byron Maxwell smiles between plays against the St. Louis Rams in the first half last December in Seattle.

INDIANAPOLIS -- According to Tony Pauline of various media outlets, the Eagles are the front-runners to land Seattle CB Byron Maxwell in free agency:

Present word has the Philadelphia Eagles as front runners for cornerback Byron Maxwell.

Pauline is hearing he won't be cheap:

Yesterday I mentioned how hot the free agent cornerback market will be. Early numbers i'm hearing are $10 mill/annually for Byron Maxwell

The Eagles don't have much of a choice, really. They either overpay for a good-not-great CB like Maxwell, or their secondary will likely be awful again in 2015.

Via Zach Berman of the Inquirer:

"Yeah I talked to the Eagles last night, briefly," Said Perryman. "Met with the linebackers coach and we just sat down and talked about 3-4 defense, they pretty much ran the same thing we ran at Miami. So it was pretty much second nature to me.”

We identified Perryman (5'11, 236) earlier this offseason as a potential draft target for the Eagles at ILB:

Perryman doesn't have good size, which is doubly concerning for a team like the Eagles who already appear to have a long-term starter in Mychal Kendricks, who is also short. However, Perryman plays big. He a physical tackler who explodes through ball carriers. He could be a long-term physical presence in the middle of the Eagles' defense if they aren't scared off by his height.

Brett Hundley had previously noted that the Eagles' offensive scheme most resembles what he ran at UCLA. He's not the only QB who could see himself landing in Philly. Alabama QB Blake Sims thinks the Eagles would be a good fit for his skill set.

"I think (the Eagles' offense) is great, with the mobility that I have, and with the things that they do, I think I'd be very comfortable in that offense," said Sims. "They have great players on their team and I think that if they added me to the team I'd be a great guy to help the team get better."

Dan Klausner of Bleeding Green Nation wrote a detailed analysis of how Sims might fit in with Philly.

There was only one long snapper officially invited to the Combine. That was Navy's Joe Cardona. But that didn't stop East Carolina's Charlie Coggins from crashing the party and leaving beer cozies at local Indianapolis bars for NFL personnel people to find:

Hottest name at the combine keeping the beers cold: @Charlie_Coggins. If nothing else, he's a marketing genius. pic.twitter.com/Un6hSJlRsH

That's actually pretty brilliant. I'll bet that if this dude has any legit long snapping skills at all, he'll get a camp invite.

Two things I learned interviewing players at the Combine:

In case you missed our Combine positional previews: