Day 4 NFL Combine preview: Safeties to watch who could interest the Eagles 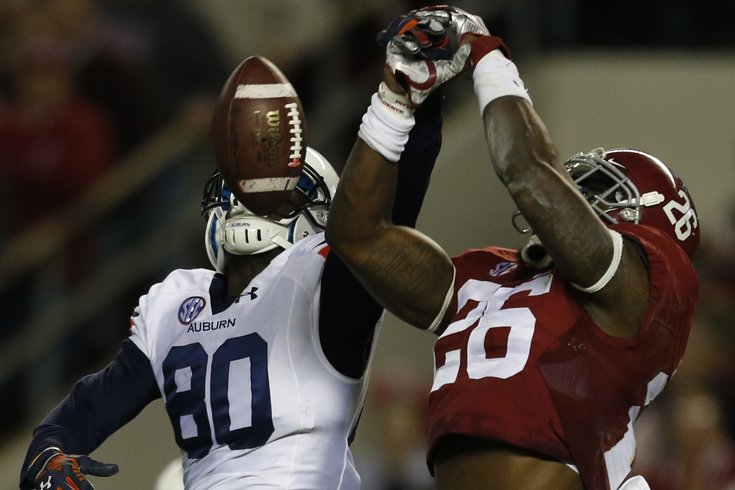 Alabama safety Landon Collins is a popular pick for the Eagles in mock drafts.

INDIANAPOLIS -- Monday is the final day of workouts at the NFL Combine in Indy, where they'll finish up with the Eagles' two most obvious needs -- cornerback and safety. Here we'll look at the safeties, which is not a great group. In case you missed any of our other positional Combine previews, you can find them at the bottom of this post:

• Ibraheim Campbell, S, Northwestern (5'11, 208): Campbell is a Philly kid and a four year starter at Northwestern. He's a good tackler, and looks to create fumbles. In 2014, he forced four fumbles and intercepted three passes. He also has nearly identical size to Earl Wolff, who was drafted during the Chip Kelly regime.

• Landon Collins, S, Alabama (6'0, 228): At 228 pounds, Collins has a thick build. He is a great tackler and looks to punish ball carriers. The Eagles have not had a punishing presence at safety since Brian Dawkins left in free agency more than a half-decade ago (#NextDawkins). The Eagles are a "stop the run first" defense, which could make Collins very appealing to Billy Davis. However, Collins' coverage skills are not on par with his run game skills. He has become a popular pick for the Eagles in many mock drafts.

Drummond was around the ball all week at the Senior Bowl practices. He's a good cover safety with great hands who can drop down and cover slot corners when opposing offenses go to 3-WR sets. He may fit what the Eagles value in their safeties better than anyone in this class, and could be a late Day 2 pick.

• Jordan Richards, S, Stanford (5'11, 211): Richards was a captain on a Stanford team with a lot of soon to be NFL players. Last season, the Eagles spent a pick on a Stanford safety with good character in Ed Reynolds.

• Eric Rowe, S, Utah (6'1, 205): Rowe started at CB for Utah this season after playing his first three seasons at safety. If the Eagles see Rowe as a CB at the next level, he has the long frame at 6’1, 205 and physical nature against the run that they have prioritized. If they view him as a safety in the NFL, he has versatility to cover receivers, which enables them to stay in their base defense against three WR sets. Rowe did not stand out at the Senior Bowl.

In 2014, Smith had just one INT, but he filled up the stat sheet in 2013, finishing second in the nation with seven INTs, while adding eight tackles for loss and four sacks. He also had six INTs in 2012.

Smith is another one of those "Malcolm Jenkins type" of safeties, who the Eagles like to use both as a guy who can drop down and cover slot receivers or play centerfield. However, at 5'10, he does not have ideal height.

• Jaquiski Tartt, S, Samford (6'1, 221): Tartt had a good showing at the Senior Bowl. He is big safety like Cody Prewitt above, but unlike Prewitt, Tartt will lay the lumber.