Also, public school students get a virtual half-day on Monday afternoon to go outside an 'enjoy' the snow 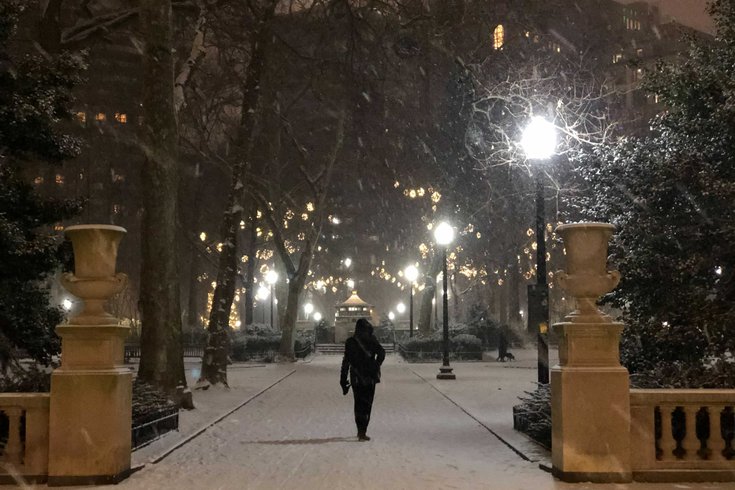 A person walks in Rittenhouse Square as the snow fell Sunday night. Snow emergencies have been declared in Philadelphia and New Jersey as a nor'easter moves through the region.

Philadelphia declared a snow emergency that took effect at 6 p.m. on Sunday. The Streets Department has deployed crews to keep city roads as clear as possible for travel.

Cars parked on streets that are snow emergency routes should be moved immediately so those roads can be plowed.

The Philadelphia Parking Authority is offering a flat 24-hour $5 parking rate at the following six city garages until the snow emergency is lifted. To receive the discount, customers must bring their ticket and pay at the garage's PPA management office.

The PPA is not ticketing for time-limit violations at metered parking spots on residential blocks until the snow emergency ends. The PPA will enforce all snow emergency and safety violations.

All Philadelphia trash and recycling collections on Monday have been canceled due to the snowstorm. Residents who normally have their trash collected on Monday, should hold their garbage until next Monday for pickup.

Decision about trash and recycling collection for the rest of the week has yet to be made. That will depend upon how the storm is going and street plowing operations. The city's sanitation centers will be closed on Monday and plan to reopen on Tuesday.

All city-run COVID-19 testing sites will be closed on Monday, and the Philadelphia Department of Public Health is working to reschedule testing appointments for patients.

All city offices are closed to the public on Monday, but the city's water department and 311 call centers will remain operational.

A Code Blue will remain in effect until further notice. Homeless outreach teams are providing residents who are experiencing homelessness with indoor spaces where they can shelter during the storm. Those entering shelters do not need to provide identification and can stay for the duration of the Code Blue.

The School District of Philadelphia will continue with all-remote learning on Monday, with teacher-led instruction in the morning and "asynchronous independent tasks" in the afternoon. "This provides our staff, students and families with the flexibility to enjoy fun, outside activities in the afternoon," the district said in an email.

The district's headquarters, school buildings and family technology support centers will be closed on Monday. Additionally, the city's access centers will not open on Monday and Tuesday.

Snow is falling across the Philly region, and more than a foot of snow and sleet could accumulate before the nor'easter moves out of the area on Tuesday.

The peak of the winter storm will hit the area Monday. Heavy snowfall and sleet of approximately 3-7 inches is expected across the Philly region. Wind speeds could reach as high as 40 mph.

Precipitation is expected to lessen on Monday night and continue through Tuesday.

The winter storm warning issued by the National Weather Service on Sunday remains in effect through 10 a.m. on Tuesday.

Precipitation will lessen in intensity Monday night, but light precipitation could linger through the day on Tuesday.

We'll have a complete update (including an updated briefing package) late this afternoon. For the latest forecast, visit https://t.co/LgidMYSCqN pic.twitter.com/AatVGjjf4E

As of Sunday night, the National Weather Service in Mount Holly, Burlington County, had reported 1-4 inches of snow across the region.

Light snow was forecasted to turn into more steady precipitation overnight, including a mix of sleet and rain along the I-95 corridor. A pause in precipitation was possible for areas south and west of Philly on Sunday into early Monday morning.

We're seeing a lot of 1 to 4 inch amounts across the area so far. At the 7PM measurement here at the office, we were on the lower end, at 1.4 inches. A change to rain is underway on Delmarva and far southern NJ, but plenty more snow to come in most areas! #NJwx #PAwx #DEwx #MDwx pic.twitter.com/T4COYGgWB7

Below is the complete NWS forecast through Wednesday.

MONDAY: Snow will mixed with sleet in the early morning will turn back to all snow after 9 a.m. Total snow and sleet accumulation between 1-3 inches. Windy with gusts as high as 35 mph. High temperature near 32. Overnight, an additional 1-3 inches of snow is expected to fall. Chance of precipitation is 80%. Low of around 30 degrees.

TUESDAY: Snow could continue until 1 p.m, with less an inch of additional snow accumulation possible. Cloudy with a high temperature near 34. Slight chance of snow showers overnight before 1 a.m. Chance of precipitation is 20%. Low around 27 degrees.

WEDNESDAY: Partly sunny with a high of around 35 degrees. Northwest wind of around 15 mph with gusts reaching as high as 30 mph. Overnight low around 23.

THURSDAY: Most sunny during the day with a high near 39. Chance of snow showers overnight; low temperature of 28 degrees.

As the first snowflakes started to fall across the Philly region on Sunday afternoon, local and state authorities began to take action in order to keep residents safe amid the winter storm.

"As this winter storm continues, the best plan of action is to stay home," Wolf said. If you are required to travel, have all the proper safety precautions in place and stay alert for rapidly changing conditions."

PennDOT has implemented vehicle restrictions on several Pennsylvania interstate highways, and more restrictions could be imposed if road conditions worsen.

SEPTA riders are encouraged to allow for additional travel time due to possible service delays and cancellations. Below are the following modifications to SEPTA service during the nor'easter.

Gov. Phil Murphy declared a state of emergency that took effect at 7 p.m. on Sunday.

New Jersey's six COVID-19 vaccination mega-sites are closed as well on Monday. The Burlington and Gloucester County mega-sites were already scheduled to be closed on Monday.

Anyone with an appointment on Monday at the Atlantic County mega site will receive a call from AtlantiCare and be rescheduled to Thursday.

"Heavy snow, coastal flooding, and high winds are expected in many parts of the state," Murphy said. “The safety of residents and workers is our utmost priority. Please follow all weather-related guidance and stay off the roads in order to allow access for emergency personnel.”