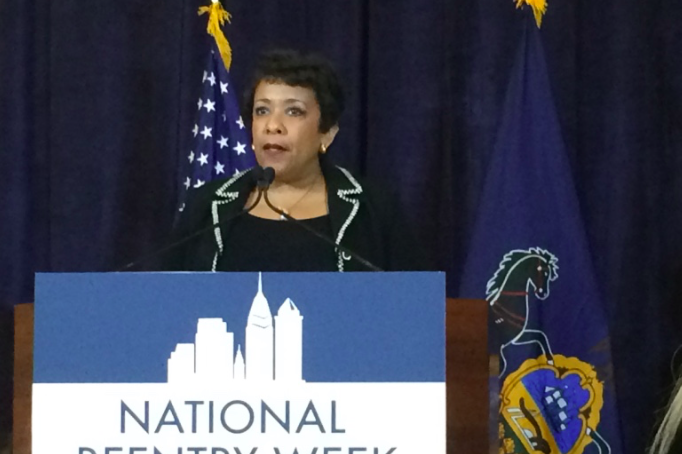 When an offender is released from prison, the road back to becoming a contributing member of society is often uphill.

One of the most significant hurdles is the stigma associated with doing time – something experienced as they try to find a job or housing.

"People continue to be punished for past mistakes," said U.S. Attorney General Loretta Lynch, during a visit Monday to Raymond Rosen Manor Auditorium in North Philadelphia. "It turns a term of incarceration into a life sentence."

Despite recent moves to strengthen the city's Ban the Box legislation – which allows applicants to withhold disclosing prior convictions until after a job offer has been made – those moving from behind prison walls into mainstream society have trouble finding jobs, getting loans to further their education or even finding housing.

To help kick off National Reentry Week, Lynch and Julián Castro, secretary of the Department of Housing and Urban Development, announced new efforts to help smooth the transition.

Every year, as many as 700,000 people across the country return to society after being incarcerated and they all leave prison "with a lot of questions" such as where to live, where to work and "what now?" Castro said.

"We need to do something about the lifetime of barriers that many people face after minor mistakes in their youth," he said.

Castro announced that DoJ and HUD will deliver $1.75 million in funding to 18 public housing authority groups nationwide, including $100,000 for the Philadelphia Housing Authority.

And, the Community Legal Services of Philadelphia – a nonprofit aimed at providing free legal services for low-income Philadelphians – will match $25,000 of that funding.

"Every American deserves the chance to contribute to our nation's progress," Castro said.

The funding from the DoJ's Second Chance Act – enacted in 2007 and aimed at reducing criminal recidicism – is part of the DoJ's new Juvenile Reentry Assistance Program.

Lynch said JRAP is aimed at those under the age of 25 who are reentering society after a run-in with law enforcement.

Through the program, criminal records for juveniles – and even adult – offenders could be expunged, corrected or sealed as permitted by state law. JRAP funds will be used to reinstate driver's licenses, provide guidance for those interested in returning to school, create or modify child support orders and family services, and provide counseling for those seeking employment.

"I believe we owe every individual that chance," she said. "Every single one of them."

Along with JRAP, Lynch also announced the new Roadmap to Reentry program. This roadmap, she explained, follows people from "the first days of incarceration to the first months of freedom" and is intended to help them navigate the reentry process.

The program seeks to offer them opportunities to secure education and employment as well as build and maintain family relationships while in prison. At the time of release, the program would provide individualized care and access to the resources necessary to become a contributing member of society.

One of the easiest re-entry proposals that Lynch said she's still working on is getting all states to provide returning citizens with a state-issued ID card once they are released from federal prisons. Not having a state ID can keep jobs and housing options out of reach for returning citizens, she said.

"This [state IDs] will lead to safer neighborhoods and brighter futures at every level," Lynch said.

Lynch admitted that these lofty goals will take time to achieve, but she said that her department is devoted to easing the plight of returning citizens.

"This Department of Justice, this administration stands with you...We will not forget you. We will walk with you down this path as you come home," she said.

And, Lynch said she believes stronger reentry programs will improve neighborhoods not just in Philadelphia, but across the country.

"I've seen firsthand the difference that strong reentry programs can make," Lynch said. "I am confident we can do this."