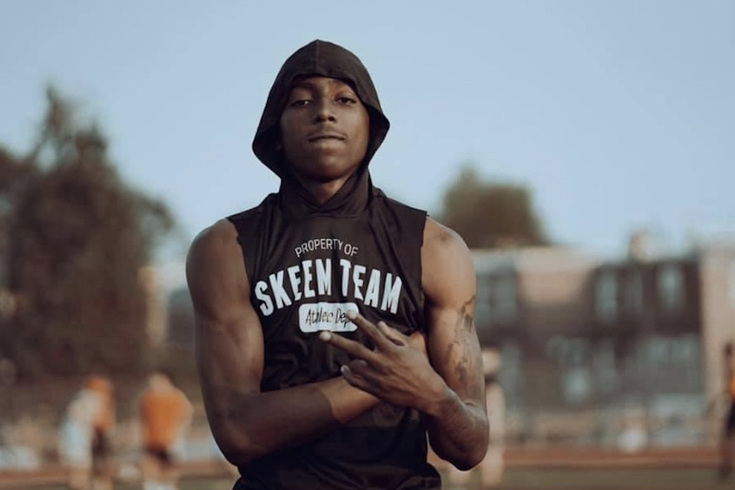 Khyrie Isaac, who was preparing for his senior season with the Northeast Philly High School football team, was shot and killed Monday while inside a car parked at a shopping center in the city's Olney neighborhood. The tragic news devastated his Vikings teammates and coaches, including head coach Eric Clark.

Seconds later, at 6:52 p.m., Clark received a call no coach wants to ever get. It was Fulton telling him, "We have to shut it down, Khyrie is dead."

Through Tuesday, there have been 340 homicide victims in Philadelphia in 2021, up 20% from the same time last year. Khyrie Isaac, a Northeast High School, rising-senior wide receiver with a jovial personality and an infectious laugh, was added to that list Monday night.

According to news reports and the many players and coaches who knew him, Isaac, 18, and a 19-year-old woman were shot multiple times while seated inside a black BMW parked at the ShopRite supermarket on the 100 block of East Olney Avenue around 7:03 p.m.  The shots were fired by three gunmen in an adjacent white sedan.

Dashed in Isaac's slaying were his dreams of playing college football. Crushed were the many teammates and coaches in the Philadelphia football community who knew him. Angered is everyone over the rampant, senseless killings in Philadelphia.

On Tuesday night, Clark slept for two hours; it was the first he had slept since hearing the news Isaac had been killed. A Northeast High graduate who went on to Towson and received a graduate degree from Eastern University, Clark has been a pillar of strength for his players and the program.

On Tuesday, amid a descending media swirl, he canceled practice and addressed his team in the school gym.

Clark and his coaching staff asked the players what they would like to do moving forward. The team overwhelmingly voted to practice Wednesday and get ready for their season opener on Aug. 27, against St. Joseph Academy in Hammonton, New Jersey, because "That's what Khyrie would want us to do." Team leaders spoke about Isaac. There were a lot of tears and a lot of laughter, recalling funny stories of how their former teammate touched them all in one way or another.

"All Khy wanted to do was play football and I'm still angry. All I did Tuesday was cry over it," said Kenny Talley, Northeast's star senior defensive end, who has a football scholarship to Penn State. "I was with my grandmother Tuesday night and she helped me, and coach Clark has been great. We have a great support system around us.

"Nowadays, these younger kids have no morals. It's why I text everyone on my team after practice to make sure everyone goes home after practice. It's frustrating, because you don't know what to do. Think about it, Khy was shot sitting in a ShopRite parking lot. That could have been anyone. These old heads need to step in to teach these young kids. There aren't any morals anymore. There's too much going on out here."

Ronel Nukah, Northeast's 6-foot-2, 215-pound, rising-junior edge rusher, who is being recruited by numerous Division I schools, including Penn State and Tennessee, met Isaac last year and got to know him in the offseason. They would stay after practice and work on one-on-one drills. Nukah received a group text that Isaac was shot. At first, Nukah thought it was a sick joke.

"Khyrie could make anyone laugh, and it hurts," Nukah said. "This came out of nowhere, and I hate to say it, it's like people get used to it."

This season, Sabor Stevens is going to be the starting quarterback for the Vikings. The 5-10, 195-pound, rising junior had built a rapport with Isaac on the field, running routes, and off the field with Isaac's contagious personality. Stevens found out on the team Zoom call on Monday night when the news surfaced.

"I didn't want to believe it, until I saw a video of Khy's body being pulled out of the car," said Stevens, who lives in the West Oak Lane section of Philadelphia and knows more than 10 kids his age who have been killed. "We're the ones getting killed, and it bothers me that no one seems to care. No one cares about Black kids getting killed. Some people care, but more people need to care.

"All Khy wanted to do was play college football and do his little end zone dance when he scored. He won't be able to do that now." 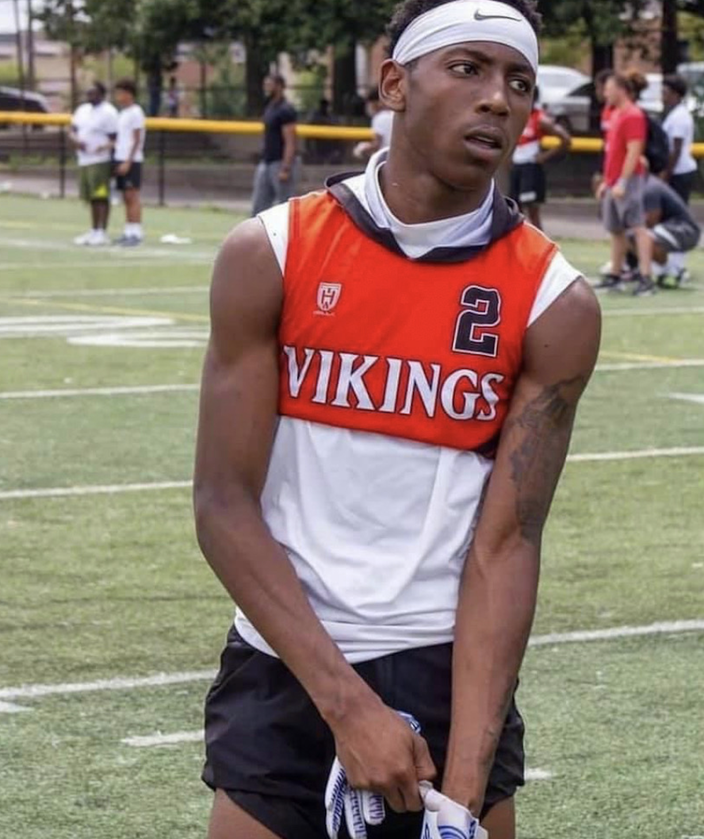 Clark has received immense support from the Philadelphia football community. Every Public League coach has reached out to him, asking what they could do, and the majority of the Philadelphia Catholic League coaches have passed along their condolences and offered support. Legendary St. Joseph Academy coach Paul Sacco contacted Clark to see if there was anything he could do.

"Everyone has been amazing, in and out of the school, and our community have come together for our young men. We let the team vote for what they wanted to do," said Clark, who's received close to 300 text messages and voicemails. "This hasn't been easy. We're trying to honor Khy as much as we can. Our young men are strong men, and they're the reason why they're so successful.

"We're going to do something to honor Khy this year. Maybe putting 'Khy' stickers on our helmets. It hurts thinking about him. I can't lie. Khy was going to have an awesome season. I didn't know him that long, I'm just grateful for the time I had him. We started practice on Wednesday, and it was a little bit of a drag. Guys began to get going when we started to stretch, and when we got into our team periods, it started to feel normal again.

"That's the goal, to try and get this as close to normal as possible. It's never going to be normal. We want to get as close to it as we can. This is what our young men asked for, and this is what Khy would have wanted. He will always be in my heart for the rest of my life. His personality was so vibrant, I didn't think I would grow so close to a young man in such a short period of time.

"I wouldn't want anyone to ever go through this. I want us to get a better appreciation of love. We need to love the process and love Mondays, and Tuesdays. We need to enjoy every day, every minute, every second. I enjoy today. I enjoy coaching my guys. I enjoy telling them I love them and the pre-practice stretch ... But our young men are under attack right now, and we're trying to do something about it. The message I told my guys is that I love them and I care for them. The only way we're going to get through this is together. We're going to play for Khyrie."

One Catholic League assistant coach, who is Black and asked that his name not be used for this story, said, "Black lives don't matter anymore? Where are the protests over this kid being shot and killed in cold blood? Where are the NFL players and NBA players speaking out about this and the gun violence in the city? It's like Black kids don't count.

"You have 'E' (Clark), (Imhotep coach) Devon (Johnson) and (Neumann-Goretti Coach) Albie (Crosby) carrying a ton of weight. Any Public League coach carries more than their share – they're the ones making the sacrifices in taking the time with these kids. Where's everyone else?"

Crosby, who's had seven players killed during his 20 years of coaching, has told his team that he wants them off of social media. The dean of area coaches, Crosby has been on the phone with Clark several times.

Crosby thinks Philadelphia's homicide rate is probably worse than the statistics posted on the police department's website. (Two police sources also confirmed that probably is case, since not all homicides are accounted for).

"Our kids are under attack," Crosby said. "This is a pandemic and no one cares. Social media has taken over all of us. Everyone is in their phone, me included, and it's reached a point where one kid puts something out, another kid wants to react. I told Eric how much of an impact he made.

"Think about the times Khyrie was happy – and that's when he was on a football field. Eric is going through it, but he needs to know the happiest that kid ever was came on a football field and he had something to do with it. We need to protect our kids. We're not. Our city is hurting. War isn't the answer, which is a Marvin Gaye quote. We have to bring love back.

"I want to see our people, and I mean all people, know that every child should want to be a parent and a grandparent. Shame on those people who want to take that away from us."

Terrance Adams is a 6-foot-2 receiver for Imhotep Charter. West Virginia, Pittsburgh, Syracuse, Toledo and Cincinnati have offered Adams football scholarships. He knew Isaac very well. He could easily be Isaac. They played together for the Northwest Raiders, from  the ages of 12 to 14.

"I'll always remember Khy, and that laugh of his, and hearing him laugh made you laugh," Adams, 17, said. "I'm going to play for Khy this season. He was someone's son, he was someone's nephew, or cousin or grandson. Khyrie wasn't only a good football player, he was a good kid. We can't forget. But this happens so much in the city, no one seems to care."

On Tuesday, the Northeast High parking lot had TV trucks in it. On Wednesday afternoon, there was no one.

Their story was over.

To those who knew Khyrie, however, his story still endures in their hearts and minds.