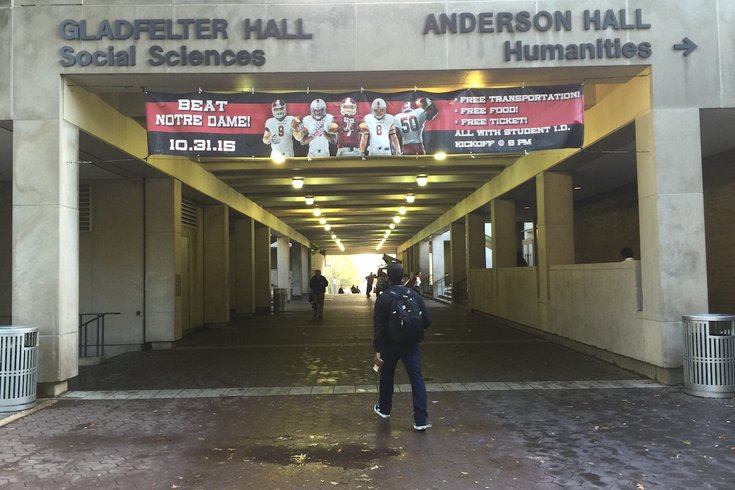 A sign hyping the Owls' upcoming game versus the Notre Dame Fighting Irish greets students on the Temple University campus.

If you were to look down Market Street toward the Center City skyline from Old City on Thursday morning, you’d see a trio of white tractor trailers blocking traffic.

Much like with Pope Francis’ visit to, among other places, Independence Mall last month, preparations were underway for an event that will draw widespread attention to Philadelphia.

Instead of it surrounding the presence of a religious leader known worldwide, the trucks were there to prepare for the arrival of a college football team that plays home games in front of a deity called Touchdown Jesus.

It was a traffic hassle, sure, but not quite the nightmare that shutting down Center City for the Papal Visit became. Civic boosters will tell you instances like these are essential to drawing attention to Philadelphia in its quest to become recognized as a “global city.”

But head up North Broad Street to Temple University’s campus and, at Cecil B. Moore Avenue, and you’ll see a very different scene (and a more convenient one at that).

That’s not about football. Rather, it was about upward momentum in the U.S. News and World Reports college/university rankings. And it did so next to a news ticker announcing upcoming contests involving the women’s fencing, basketball and volleyball teams.

Walk a diagonal block and you’ll see a 20-foot tall pile of rubble sitting behind a sign that reads, “Building Momentum. Our new library is on the rise!”

It’s only when you get to the mid-campus bell tower where you see the first sign hyping the Halloween Night football battle with the higher-ranked Irish, and offering free tickets and transportation to the game (student-ID required).

One team is a college football powerhouse with a rich tradition that boasts of 13 national championships. The other is riding a recent wave of success that may very well draw them enough support to build a much-desired stadium that would see the Owls hosting games on their campus instead of at the Eagles’ house.

Let’s set aside criticism of how the school slashed five sports to bolster the football program in an effort to draw more national attention to itself. For the sake of this story, that gets negated by the fact that Head Coach Matt Rhule has recruited not just a small number of local players for his booming program.

The fact of the matter is this: The Irish are double-digit road favorites for a reason. And that reason lay in the knowledge that they are a markedly more established program who draw top-tier players who play for a squad that has fans nationally and beyond. (And, oh yeah, they're the better team right now, too.)

Notre Dame winning on Saturday is an inevitability – don’t @ me around 11:30 p.m. Saturday if I’m wrong – and I don’t tell you that because I’m a hater.

This is the point at which I fully disclose that Brian Patrick Hickey grew up a Notre Dame fan and, even though the Owls are my adopted Big Five ride-or-die side, unabashedly want the Irish to leave town, and saddle Temple, with a 7-1 record.

I tell you that because what happens after people mope their way out of the stadium is what worries me most. Say Notre Dame rolls into the Linc and puts a hurting on the Owls to the tune of 45-17. That doesn’t mean the Owls were embarrassed after finally getting some College Game Day respect.

What it means is that the Temple football program has built itself up to the point where it’s worthy of national recognition. While they’ll probably slide out of the Top 25, the team that the Big East deemed worthy of exile scrapped its way back from Elba and put a dent in the theory that Philly is not a college-football town.

It has brought, and will continue to bring, excitement to a city sporting scene that’s not exactly good these days, at least not professionally.

No, they don’t deserve a Taney Dragons-esque participation trophy of a parade. But with four games left against competition nowhere near Notre Dame’s level, an 11-1 schedule lands them in the thick of bowl-season selection possibilities.

Which, it bears mention, is considerably better than anything else happening down at the South Philly stadia these days.