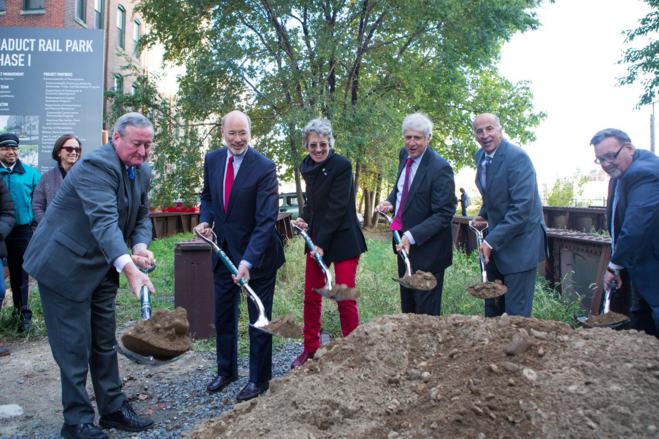 Work is officially underway in Center City to transform a defunct rail yard into a public green space.

Wolf said a $3.5 million state grant will fund the project's first phase. Those plans include revitalizing the 1300 block of Noble Street and the elevated portion of the viaduct that runs to Callowhill Street.

“This transformational project will create a new community space and trail in a neighborhood completely lacking public amenities and green space,” Wolf said.

Exited to break ground for Reading Viaduct with Gov and Mayor. Not since the Parkway has such greening been undertaken. pic.twitter.com/5RuvQZFQj2

Built in the last 19th century, the viaduct was a key transportation hub that connected Center City with the northern and western suburbs. However, the tracks have not been in use since 1984 due to the completion of the commuter tunnel.

After the project is finished, the stretch of land from Fairmount Park to Northern Liberties will be turned into parks and green space. It will be known as The Rail Park.

Friends of the Rail Park, a nonprofit group advocating for the effort, said the first phase of the project was designed by Studio Bryan Hanes. Plans include wooden platforms to accentuate areas of planting and seating, surfaces for lounging and gathering, and a series of swings.

"I look forward to seeing that collaboration continue as the Viaduct Rail Park comes to life, adding more green spaces for our residents and visitors to enjoy,” Kenney said.

The project is expected to be completed in early 2018.