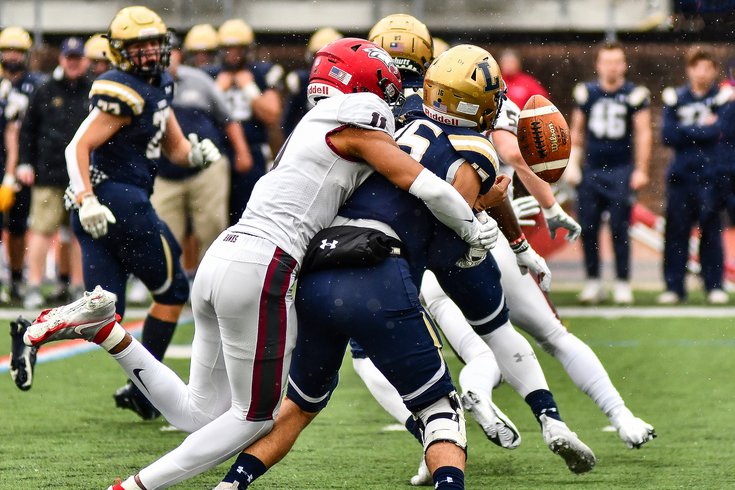 Prep linebacker Rocco Nicholl makes a tackle and forces a fumble during a game against La Salle earlier this season.

In August, in the minds of many that follow area high school football, one team was already penciled in for a December date in the PIAA Class 6A state playoffs, where the other team was an afterthought.

On Saturday at 7 p.m., before what promises to be a packed stadium at Ridley High School, three-time defending PIAA 6A state champion St. Joseph’s Prep will take on Garnet Valley in the state semifinals.

The winner will face the winner of the west semifinal game between District 6 champion State College (8-5) and District 7 champ Mt. Lebanon (13-0) in the 6A state championship next Saturday at 6 p.m. at Hershey Park Stadium.

St. Joe’s Prep (10-2), ranked No. 1 by PhillyVoice, will be looking for its eighth trip to the state finals in the last nine years. They are the area’s high school “Dallas Cowboys” (or perhaps more recently the Patriots) coming to Delaware County, hated in some quarters, beloved in others, because they are traditionally excellent—and they know it.

The Hawks will have a chance to become the first four-time state champion at the 6A level since Pennsylvania moved to the 6A level in 2016. In fact, The Prep has appeared in each 6A state championship game since the 6A system has been implemented.

On Saturday night, The Prep will be facing a different coaching icon in Garnet Valley’s legendary Mike Ricci, who has seen his team go 14-0 for the first time in school history.

Ricci, who is in his 37th year—and final season—as head coach of the Jaguars and 38th overall year in coaching, has tabbed this team a “special group” all season long. Over the last 193 games, Garnet Valley has gone 163-30 overall. This senior class is an amazing 31-2, with their only losses coming against Downingtown West’s Will Howard, now at Kansas State, in 2019 and a loss to Coatesville in the 2019 District 1 semifinals.

St. Joe’s Prep is very young. The Hawks have been uneven this season, looking amazing one game and shaky, by Prep’s high standards, the next. Hawks’ coach Tim Roken has known nothing but winning since he took over for Gabe Infante, and he and his staff have probably done their best coaching job this season.

Sophomore quarterback Samaj Jones has been explosive, able to flick a ball 60 yards for a touchdown, or do what he did last Friday in the Hawks’ 24-21 state quarterfinal victory over District 11 champion Freedom, when he rushed for 145 yards on nine carries, including touchdown runs of 11, 29 and 73 yards.

When Jones has been down with injuries during this playoff run, senior Dane Picariello has filled in and done a decent job.

They will need to be disciplined against Garnet Valley, which is run by senior quarterback Max Busenkell, a Notre Dame lacrosse commit.

The Jaguars have been close to unstoppable in the playoffs. They run out of a Wing-T, but they’re able to attack opponents from 20 different directions, it seems. The Jags are averaging 48.7 points a game in the playoff, thanks to Navy-bound speedster Shane Reynolds and his help up front from tackles Nolan Brennan and Austin Sorokanych, center Sam Di Trolio, and guards Ben Nash and Nick Mahoney.

Here is something interesting to note: Ricci and Garnet Valley went for it on fourth-and-five at its own 25 against Coatesville in the district championship, and after converting, went for it again on fourth-and-three during the same drive and converted again. Why is this curious? It came in the second quarter with Garnet Valley holding a 14-13 lead. It says Garnet Valley and Ricci are not stopping for anything.

The Jags have not punted the last two games.

“I haven’t seen St. Joe’s Prep live, I’ve only seen them on tape, and I’m very impressed by what I see,” Ricci said. “They’re a very well coached, very talented team and I like both of their quarterbacks. Jones is a really good athlete, and (Picariello) is big and a good athlete, too. I like different things in both of them.”

Garnet Valley has a pretty staunch 5-2 defense itself, led by senior defensive back C.J. Wood, with rotating defensive tackles Kieran Gallagher, Matt Collins and Sorokanych, Brennan as the nose guard and Drew Van Horn and Will Wrzesniewski as the defensive ends.

With Wood stabilizing the secondary and calling the defense, linebackers Joe Halloran and Drew Jackalous suffocate the short passing game, while rotating corners Busenkell, Luke Lassik and Ndozi Okolo take pressure off the defensive front by how well they stick receivers.

Garnet Valley has a 20-game winning streak. The Jaguars and Mt. Lebanon are the only PIAA 6A teams left in the state that are undefeated.

“This is probably the biggest game in the program’s history, from the perspective that we’re playing against a nationally ranked power, and we’re playing in the largest classification in the state,” Ricci said. “We’re executing our offense well; our offensive line has been getting off the ball. Defensively, CJ is our quarterback on defense, and he places us in positions to make plays.

“I’ve said it before and I’ll say it again, this is a very special group of kids. It’s a team that I’ll never forget. Our strength is playing together and playing as a unit. We have a lot of respect for St. Joe’s Prep, their team, and their tradition and what they have accomplished. In that same respect, we also believe very strongly in our team and what we’re capable of doing.”

Which lately appears to be exploding defenses.