Veronica Fortunato thought she was meeting with HR to discuss 'hostile work environment,' but was fired on the spot. The practice denies her accusations 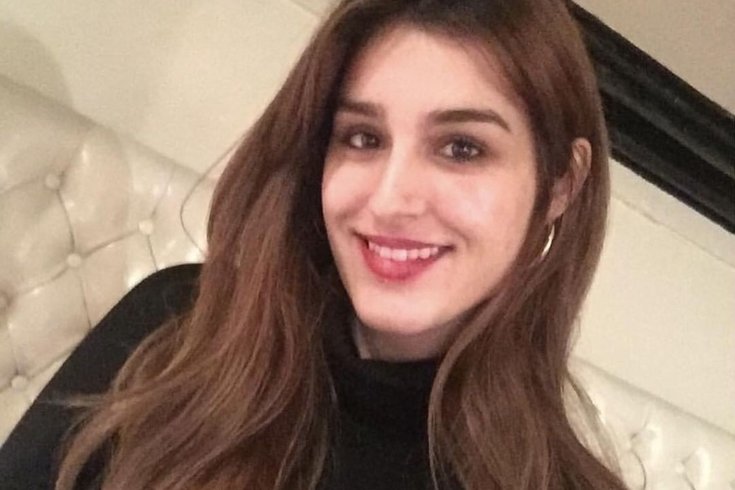 Veronica Fortunato claims she was fired from her job as a paralegal at a Center City law firm in October 2018 because she complained about ongoing instances of sexual harassment and bullying in a 'malignant work environment.' She and her attorney have filed a lawsuit in the U.S. District Court for the Eastern District of Pennsylvania.

She claimed last week that the termination was a direct effect of her complaints about a “hostile work environment” that included numerous instances of sexual harassment at the law firm which “is well known in the Philadelphia legal community for the party culture in which it keeps its employees.”

A spokesman for Zarwin Baum said Tuesday that he was "unable to respond to the specific unverified allegations" leveled against the firm by Fortunato, noting that "we intend to vigorously defend these baseless allegations." That spokesman, Theodore Schaer, said the complaints had nothing to do with the basis for her termination.

Fortunato shared her troubling allegations during an interview with PhillyVoice last week, complaints which her attorney, Conor Corcoran, said have been filed with the federal Equal Employment Opportunity Commission and the Philadelphia Commission on Human Relations.

Corcoran said they’re going to “let that process run its course before pursuing any litigation” regarding gender-discrimination violations of the Philadelphia Fair Practices Ordinance, the Pennsylvania Human Relations Act and Title VII of the Civil Rights Act of 1963.

“It’s all about the law-firm culture. I just want to get it out there. This sort of thing happens all the time and it’s never talked about,” said Fortunato. “If I have to put it out there and get the backlash for sticking up for myself, that’s OK.”

When Fortunato started her $52,000-a-year job with the firm at 1818 Market St.. it was a nice career start for a woman who received a bachelor of business administration degree from Temple University, where she studied pre-law.

After nearly a year as a paralegal at another firm, she originally worked as a paralegal for two Zarwin Baum attorneys, but by August, she said she’d proven her worth to warrant the addition of a third.

Fortunato said it took but a month from her starting date to realize things weren’t as good as they initially seemed. It felt like she was under siege from all angles, whether sexual harassment from men or bullying by women, she contended.

She termed it "a malignant atmosphere,” claiming the firm was well known within the city's legal circles for a "party culture" that extends to happy hours and its annual Final Four March Madness party during the NCAA men's college basketball tournament.

She charged that the firm's culture has been "aggressively hostile towards women," a track record that left her feeling targeted because of her gender. 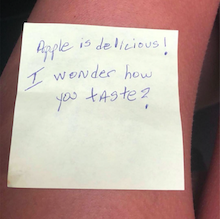 The note which Veronica Fortunato claimed an attorney passed to her one morning at the office.

Fortunato shared a laundry list of allegations to back her claims, “a pervasive pattern of unlawful sexual harassment” mostly centering on one attorney at the firm, Jay Leffler.

• During her first month at the job, Leffler asked her to follow him into the office kitchen for a story, which ended up being a tale of his flirtations with a previous paralegal. "At one point, that paralegal joked about whether Leffler had an AARP membership. Leffler said to me that he responded by saying, 'You won’t be saying that when I f*** you later.'”

• He “persistently commented on how sexy he found me to be in the eyesight and earshot of other employees. ... That was just humiliating.”

• Within the first two months on the job, he “began to persistently comment about my ‘scent,’ comment on how good I smelled, unnecessarily walk by my desk to stare at me until I became uncomfortable, and commented on my figure and my taste in clothing.”

• After her father died in June, “Leffler began daily deliveries of apple slices and peanut butter to my desk, once accompanied with a note, written in his own beady handwriting, which said, ‘The apple was delicious! I wonder how you taste?’” She provided a photo of that Post-It note as evidence.

• She was called into an attorney’s office at the firm and asked to pick fantasy-football teams with “grotesque (names including) sexual connotations” from a hat “to the perverse delight of several male partners and associates.”

• Leffler once allegedly “grabbed my hand, and forced me to rub the crown of his head" in an elevator.

• She was humiliated when she heard that a partner told staff in the mailroom “that he ‘did good’ by hiring ‘a hot girl’ like me." She also heard of inappropriate discussions about “the vulgar ways in which they wished to have sex with me.”

• Women at the firm "would bully me and exacerbate the labor conditions under which I worked, over my appearance. Things like being too skinny, too tall for high heels, or being a 'slut' because I received flowers at the office."

• “When I asked Jay Leffler to leave me alone, and cease his behavior, he began shouting and ranting and raving in front of other Zarwin employees,” she said, noting that her complaints were dismissed as “guy talk.”

Fortunato said enough was enough on October 10, 2018 and made an appointment to discuss the situation with the office manager. When she walked into the manager's office, however, there were two attorneys there as well.

Instead of having an opportunity to raise her complaints, Fortunato was fired on the spot.

She contends her dismissal was retaliation for deciding "to complain about the general hostile work environment at Zarwin Baum and the specific behavior of Jay Leffler, Esq."

"There is no other explanation for my dismissal from Zarwin Baum," she alleged.

'NEVER MADE A SINGLE COMPLAINT'

Leffler did not respond to a request to comment for this story.

Theodore Schaer, shareholder and co-chair of the firm's property and casualty and professional-liability defense department, initially declined to comment, noting that he would "suggest in the meantime that your investigation for your story also include a full civil and criminal background check on Ms. Fortunato."

That turned up a 2016 speeding offense in Delaware County and another arrest in a vehicular case –  prior to earning more responsibility at Zarwin Baum and resolved with a guilty plea more than two months after her firing.

Upon later hearing Fortunato's allegations, Schaer said he could not comment because of a pending complaint filed with the PHRC "which we have not received." He also cited a "robust policy against sexual harassment in the workplace" and said the firm conducts sexual harassment training for all employees.

"She was terminated for cause due to her poor work performance and absenteeism which is well documented. We intend to vigorously defend these baseless allegations."

Fortunato's attorney responded that "Zarwin Baum's perception of reality is as inebriated as its vulgar little party at the Crystal Tea Room."

"She got a promotion in responsibility shortly before she was fired, and she was fired because Zarwin Baum has a history of protecting the squalid interests of Jay Leffler, who has evidently pawed at other paralegals before, and received explicit permission from the firm to do so," Corcoran charged Tuesday afternoon.

"Ms. Fortunato's complaints were well known amongst her superiors and co-workers, such that when she told that grody little man to leave her alone and then contacted HR to complain, they fired her before she could get an officially documented word in edgewise," he continued.

'WOULD YOU CALL YOUR DAUGHTER THAT?'

Fortunato’s complaint was filed with the EEOC in late December and transferred to the PCHR on February 25, which is investigating, according to Corcoran. There are plans to file a lawsuit in the coming months and the case would proceed to Philadelphia's Court of Common Pleas. (The EEOC did not responded to an email seeking information about the status of the complaint. A spokeswoman for the PCHR said that their records did not show the case being formally transferred as of yet.)

Looking back at her six-month tenure at the firm, she said it quickly became obvious that it wasn’t a normal workplace.

Employees were urged to socialize at a Center City bar at the center of controversy in 2017 because of its penchant for misogynistic or sexually-explicit messages posted on a chalkboard in its front window.

"My last happy hour working there was at Smith's," she shared.

She responded to the “slut” comments by asking, “Would you call your daughter that? No? Well don’t call me that, then.” That it was done in front of male partners “set a tone.”

“I don’t want anybody else to have to go through what I went though. I hope I help others speak out about their experiences." – Veronica Fortunato

Though she didn’t work with Leffler, he would walk by her desk all the time since he’s “good friends with my boss. There was no reason for us to have to talk. His office was on the other side of the building from where I sat.”

Catty comments about weight from women in the office stung because “I’ve struggled with my weight, and it’s a deeply personal thing."

On or around October 9, Leffler was screaming at her in the office, she said. Fortunato thinks it’s because he knew she told people about his behavior generally, and the note on the apples specifically.

She said she was at the point of wanting to quit, but scheduled a meeting with the office manager to discuss her concerns.

“I was crying. I didn’t want to be there anymore,” she said. “I was never told there were any issues with my work. But asking for that meeting was the tipping point. When I walked in at 3:30, (the office manager said) ‘We’re going to have to let you go, chica.’

"They fired me before I could even discuss why I wanted to have the meeting. They didn’t tell me why. I got a severance package, but it was pretty cheap. I walked out, got my stuff and thought, ‘OK, that’s it.’ I was knocked into unemployment and that was a really rough thing to deal with.”

She spent the next few months studying for the LSAT and looking for a new job, a difficult task during the holiday season.

Looking back, she said the "malignant atmosphere coddled a man like Jay Leffler," thus bolstering the "pervasive pattern of unlawful sexual harassment" she said she faced.

Today, she has a new job in Center City, but hopes what she went through at Zarwin Baum will spark a #MeToo awakening in Philadelphia's legal community.

“I don’t want anybody else to have to go through what I went through," she said. "I hope I help others speak out about their experiences.

"I want to show women and firms that it's OK to stand up for yourself against the partners, that it's not OK to have to deal with inappropriate comments that make you feel uncomfortable, and that Human Relations should take you seriously.”

Zarwin Baum's 17th annual March Madness Party – which has raised more than $300,000 for charity over the years – is scheduled for Thursday at the Crystal Tea Room.