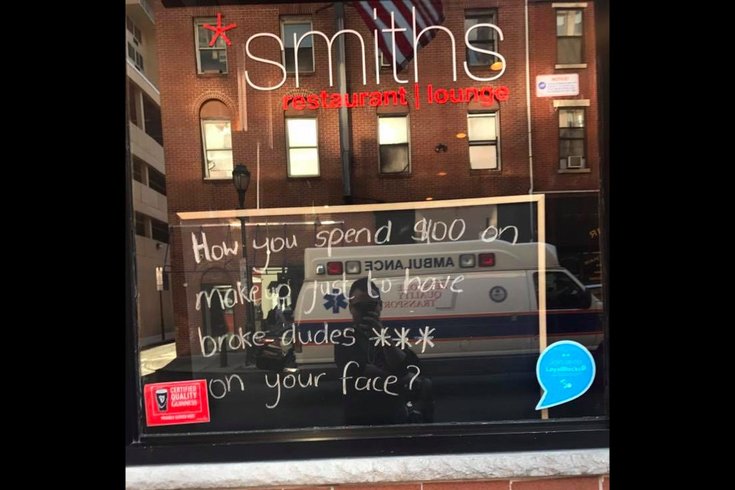 This sign outside Smiths Bar & Restaurant in Center City caused controversy online, with some claiming the message was sexist and misogynistic. It reads: "How you spend $100 on makeup just to have broke dudes *** on your face."

A Philadelphia bar with a history of displaying raunchy signs in its front window is coming under fire for the latest sexually-explicit message that greeted patrons and pedestrians earlier this week.

Smiths Restaurant & Bar, at 39 S. 19th St., not far from the bustling Center City corner at 19th and Chestnut streets, has long displayed jokes – oftentimes vulgar ones – handwritten on chalkboards in the bar's front windows. In the past, messages have spurred allegations of sexism and other seemingly make light of violence.

Center City resident Charles Bellinger revived the debate when he posted a Facebook photo of the sign in the window Tuesday that read:

In the past two days, the bar has received 10 new one-star Yelp! reviews, each chiding the bar, accusing it of being insensitive and inappropriate.

"Look, I'm just a dude that is tired of cheap shots at women and sexism of certain segments of bar culture," Bellinger wrote in a Facebook message. "As a man who doesn't have to endure that sort of misogyny s*** day in and day out I can't stay silent when you can call people to the floor on it."

While everyone is entitled to their freedom of speech, Bellinger said he thinks consumers should be aware of the bar consistently being "positively gross."

Smiths' history of pushing the line has gotten it in trouble in the past, admits its general manager John Barry. In 2015, a joke about Caitlyn Jenner led to a visit from then-director of LGBT Affairs Nellie Fitzpatrick, which promoted an apology from Barry and a promise to better educate the staff.

Another sign posted four or five years ago (by Barry's count) said: "I like my beer like I like my violence... domestic." Barry said the bar apologized for that sign too, and donated money and volunteered time to a women's group (although he could not remember specifically which one).

"We were really apologetic for it because it was terrible," Barry said.

Barry claimed some of the outrage about subsequent signs – which are changed every few days and are written by staff members – has been manufactured.

"We've kind of been in the spotlight ever since then," Barry said. "I think people have been looking for things that aren't there."

Philly resident Cristina Ferrandina posted several of the past signs to Facebook, lambasting them as sexist and misogynistic. The post was shared 75 times and she reposted to a private feminist group where she found someone to go with her and talk to the bar staff about the sign.

A heated exchange took place between Ferrandina and the staff member who wrote the sign. Eventually, Ferrandina was able to get Barry's contact information and spoke with him about it.

By both of their accounts, there was a serious disconnect in what each other was arguing. Ferrandina tried telling Barry how jokes like the one posted Tuesday perpetuate rape culture, which made Barry defensive.

Ferrandina tried explaining that although the joke isn't explicitly about rape, it creates an environment that makes many women feel threatened, she said.

"If people are telling you this makes them uncomfortable or unsafe, you have to take it with a grain of salt and move on and learn from the experience," Ferrandina said. "You're posting it on a public window, [visible to] people that don’t even [patronize] your business. It's completely degrading to women."

Ultimately, Barry apologized and said he hopes in the future to avoid signs like the one posted Tuesday. But he defended his staff, who he said never intend offend anyone, and said many patrons and people passing by really enjoy the the jokes, which range from the crude to the corny to the sexually explicit.

"You'd be amazed by what people are offended by and aren't offended by," Barry said.

Ferrandina said she appreciated Barry taking the time to speak with her about the latest sign, even calling him a "really sweet guy." But she believes the message she and her friend tried to get across didn't sink in, and if the bar's staff continues posting signs like Tuesday's, they'll be creating an atmosphere that makes many women uneasy.

"If people think those are funny," Ferrandina said, "is that really the clientele you want in your restaurant?"