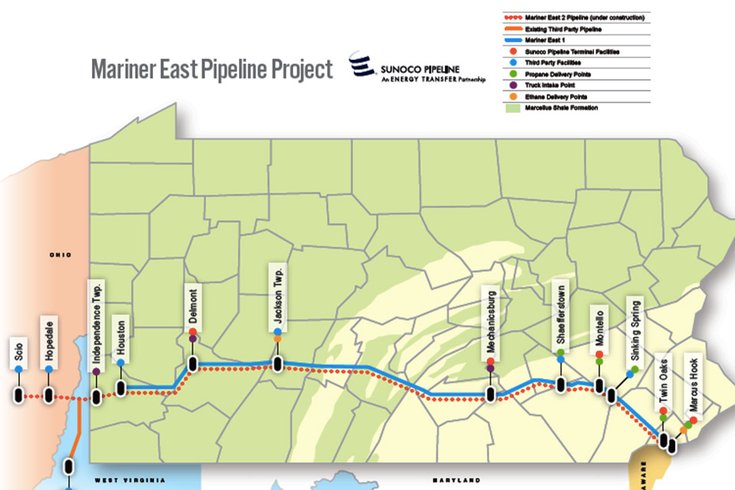 The Mariner East 2 pipeline would bring natural gas from western Pennsylvania to a terminal in Marcus Hook, Delaware County.

The state Department of Environmental Protection on Wednesday ordered Sunoco to stop construction of a natural gas pipeline across Pennsylvania, citing "egregious and willful violations" of law.

Over the past year, a series of spills and leaks have plagued the $2.5 billion project to build its 350-mile-long Mariner East 2 pipeline to carry propane, butane and ethane from the Marcellus Shale formation in the western part of the state to a terminal in Marcus Hook, Delaware County.

The DEP, which ordered the work halted until Sunoco Logistics can operate according to the terms of its permit, has cited the company for dozens of environmental violations. The agency said Sunoco has proven a "lack of ability or intention" to follow clean streams law and other environmental regulations, the Associated Press reported.

In a statement, DEP Secretary Patrick McDonnell said his agency was out of options.

“Until Sunoco can demonstrate that the permit conditions can and will be followed, DEP has no alternative but to suspend the permits,” McDonnell said. “We are living up to our promise to hold this project accountable to the strong protections in the permits.”

Construction on the 20-inch pipeline had been scheduled to finish in the second quarter of 2018, with another 16-inch pipeline ready for service later this year, according to Sunoco.

“From the beginning of construction, I have shared the concerns of residents across the commonwealth about the safety of the Mariner East 2 pipeline project," said state Rep. Leanne Krueger-Braneky, of Delaware County. "A year and over 100 spills later, I am relieved to see construction halted until Sunoco Logistics complies with safety regulations in a proactive manner.

“Construction on the Mariner East 2 pipeline across Pennsylvania — but especially in Delaware and Chester counties — has impacted drinking water, wreaked havoc on private property, and posed a grave danger to our citizens," Krueger-Braneky continued. "Sunoco Logistics has shown a blatant disregard for these things that we hold dear and which are protected by our state Constitution. I thank Governor Wolf and Secretary McDonnell for their attention to this issue and for suspending the construction of this pipeline."

For the full story, read the AP's report here.