Pennsylvania's strange, single-arch McDonald's sign to be preserved by fanatic 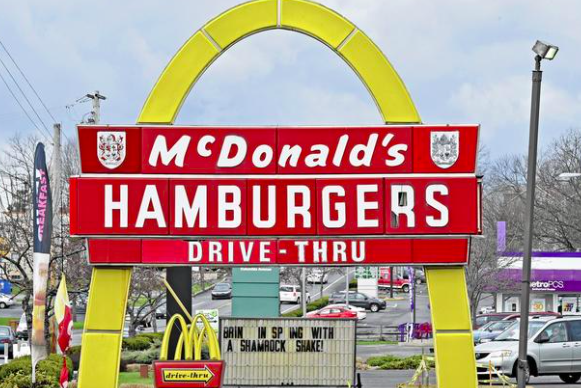 This Friday, March 25, 2016 photo shows a circa-1962 McDonald's sign in East Hempfield Township, Lancaster, Pa. The restaurant's owners say it will be given to a Lehigh Valley collector. A drive-in, carry-out only restaurant, it was the first McDonald's in Lancaster County, opening seven years after Ray Kroc's first McDonald's franchise in Illinois.

Back in February, Philadelphians watched as LOVE Park's iconic Robert Indiana sculpture was whisked away to allow for the $16.5 million renovation$ of the Center City oasis. The sculpture had been sitting in its repose since 1978, and all of a sudden it was relocated right across 15th Street at Dilworth Park.

Lancaster went through a similar experience this week when its peculiar single-arch McDonald's sign, installed like an odd chromosome around 1962, was scheduled to be removed from the fast-food location at 1755 Columbia Avenue, where it was relocated in 1989, according to Lancaster Online.

In the week after an announcement that the sign would come down, the restaurant's owners received a rush of inquiries and announced that it would be salvaged by a Lehigh Valley collector with a bit of an obsession for Micky D's.

Mike Fountaine, the 62-year-old Allentown curator who has owned four McDonald's restaurants, keeps about 75,000 pieces of memorabilia and 20,000 lapel pins at his home, The Morning Call reports. If anyone deserved to take the sign, which measures about 25 feet tall and 26 feet wide, it was Fountaine.

“I’m thrilled,” he said. “It’s definitely going to be one of the highlights of my collection. When it is put back in place, I’m going to have it beautiful.”

That might prove a bit of a challenge given the sign's aging structural steel and fragile plastic panels. The restaurant owners expected to pay about $5,000 to remove and dispose of it, but the cost will be about the same now – at Fountaine's expense – with plans to take it apart and reassemble it. The target date to complete the job is April 18.

The best part about this resolution – who would guess that an avid McDonald's collector lives right in the area? – is that Fountaine plans to open up a McDonald's museum within his lifetime. Just look for the (singular) Golden Arch.