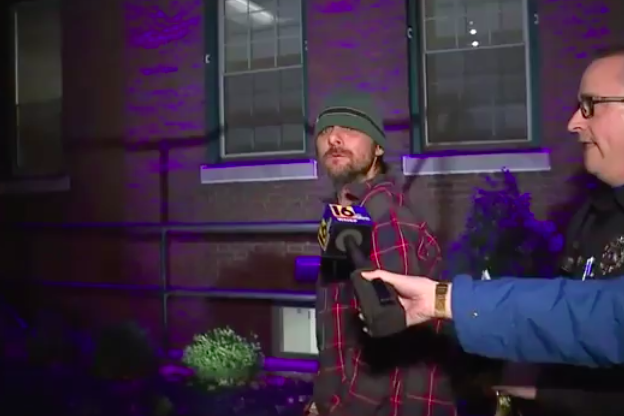 Dale Sourbeck, 49, of Pittston, is charged burglary and related offenses after he allegedly tried to steal guitars from Rock Street Music.

A Luzerne County man who allegedly attempted to steal musical instruments from a local shop had one message for the world as he entered a cop car.

The 49-year-old Pittston resident was arrested after 3 a.m. Thursday when security cameras allegedly caught him trying to steal guitars from Rock Street Music, according to WNEP.

Authorities caught up with Sourbeck after the footage included a clear picture of his license plate.

When police arrived at his home, they reportedly found the stolen guitars, one acoustic and one electric worth about $1,000 combined.

The manager of the music store said the windows had been smashed with a hammer.

Sourbeck reportedly entered the shop without a mask and then froze momentarily when he realized he was on camera. He also allegedly returned to the store with a mask and tried to steal a few more guitars, but a local resident stopped him on his way out.

Sourbeck is charged with burglary and related offenses. He's being held at Luzerne County Jail.

This is obviously not what the Eagles meant by the whole ski mask celebration.