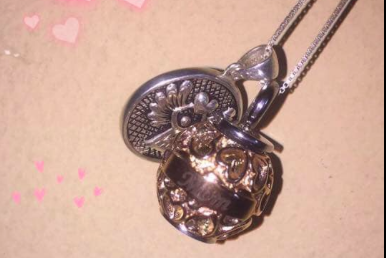 Brianna McCollum says the necklace seen above, which contains some of her mother's ashes, was stolen along with her backpack while she was attending the "2 Street Parade" and South Philly, following the 2019 Mummers Parade on New Years Day.

A South Philly woman is desperately seeking help from the public after a treasured piece of jewelry and tribute to her mother was stolen during the post-Mummers Parade event on Tuesday night.

Brianna McCollum, 21, posted on Facebook that the necklace, pictured below, was taken along with a backpack at the "2 Street Parade," the annual Mummers Parade after-party on Second Street in South Philly that takes place after the daytime festivities.

McCollum said the necklace had been in a purple JanSport school bag, which she last had in her possession while on Third Street between Wolf and Jackson streets. She told FOX29 that she had been carrying the bag with her and simply set it on the ground while surrounded by a group of friends. She suspects someone picked it up and walked off with it.

The only reason she took the necklace off was to keep it safe during the hectic New Years Day celebration.

"I'm getting upset," McCollum said. "My grandmom bought me the necklace to put (McCollum's mother's) ashes in, and I've worn it every day since I've gotten it. The one day I take it off to be safe this happens."

The necklace is described as rose gold and has the word "mom" engraved with a guardian angel charm attached.

McCollum said she doesn't care who took the bag or why — she just wants her necklace back.

Anyone who finds the necklace or has information is asked to contact her here.