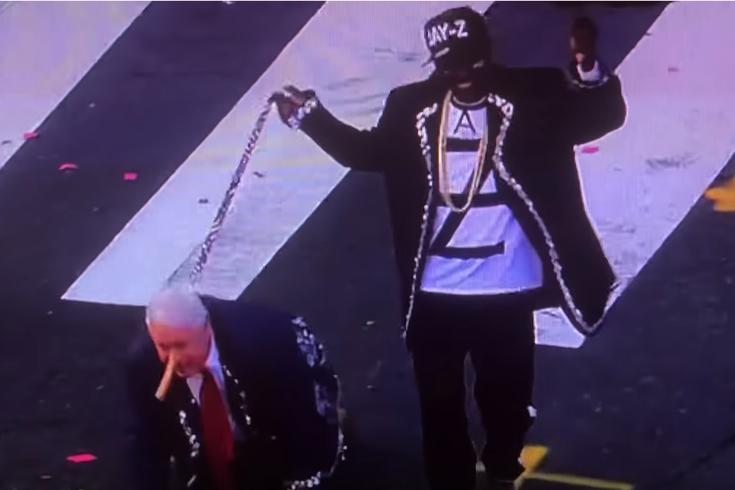 The skit in question.

Tuesday’s Mummers Parade was more of the same: alcohol, revelry, and boundary-stepping. One skit, though, riled up some social media users because it appeared to show a man wearing blackface, dressed as Jay-Z.

Now, it seems, that interpretation was incorrect.

The skit, which depicted Jay-Z treating Philadelphia Mayor Jim Kenney like his dog, was clearly a jab at the public spat between the two over the future of the Made In America music festival:

While certainly off-putting and generally weird, that alone probably wouldn’t have sparked the kind of backlash the skit received.

Early Wednesday afternoon, City Council President Darrell Clarke issued a statement condemning the use of blackface in the skit.

“The skit involving a blackface Jay-Z walking a long-nosed Mayor Kenney like a dog was offensive, racist, and not even a little bit amusing,” Clarke said.

He went on to call for apologies to Kenney and Jay-Z, and said the city’s residents should have a say in whether a performance crosses the line.

"Blackface does not belong in the public square, period," Clarke said. "And it should certainly not be broadcast into our homes, as part of an event that is sanctioned by the City of Philadelphia.”

Less than a half-hour after Clarke released his statement, however, PhillyMag released a story talking to a black man who claims to be the one who portrayed Jay-Z as part of the Finnegan New Years Brigade Comic Club's performance.

The man didn’t identify himself, but this picture from one Twitter user seemed to show the man, who indeed is black:

Roughly a half-hour after the PhillyMag story was released, Kenney’s office released a statement. Kenney, a former mummer himself, explained that the city has to approve each mummers skit before the New Year’s Day celebration:

“In this particular instance, the Finnegan group submitted its concept in advance of the parade, representing to both the City and Mummers organization that the performer portraying Jay-Z would be an African American male and would not be dressed in blackface. The Finnegan group says that it complied with its theme application. The City condemns the use of blackface in any form and will continue to work with the Mummers to ensure future performances are nondiscriminatory.”

While the Mummers Parade continues to alienate groups all over the city, and has a checkered past many of its participants don’t seem eager to confront, in this instance it seems the skit wasn’t as bad as it initially appeared.