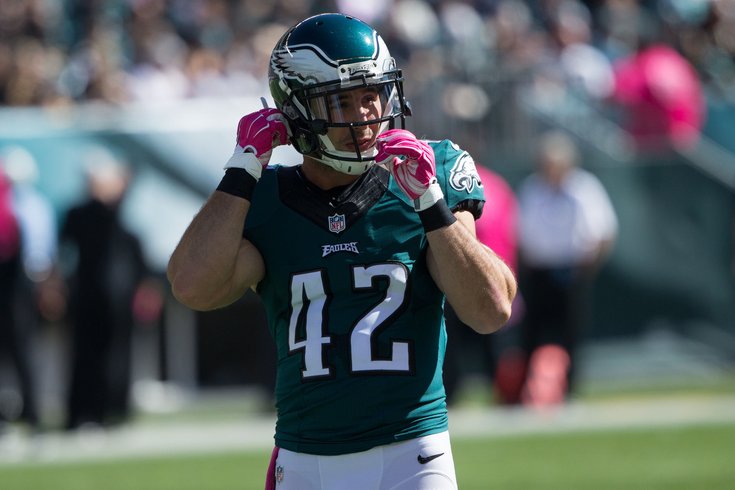 Maragos hasn't played in a game since 2017, when he suffered a knee injury in the team's Thursday Night Football win over the Carolina Panthers. He played just six games that season, sidelined during the team's first-ever Super Bowl-winning season, and wasn't able to return to the field in 2018.

MORE SPORTS: What they're saying: It's Super Bowl or bust for the Eagles in 2019

Just a few hours earlier on Tuesday, Maragos posted a photo of himself heading into another surgery:

They say the 3rd time is a charm...thankful for all the support and prayers by everyone through the unfortunate surgeries and rehabilitation up to this point, grateful for you all! pic.twitter.com/bewtWDUFt0

Unfortunately, Maragos said in his announcement Tuesday, his career was cut short "due to a knee injury, surgeries, and the rehabilitation from it."

Maragos thanked Eagles fans in particular during his announcement, for the support he received throughout his career.

What an amazing ride, thankful for everyone who made it so great! pic.twitter.com/8X3icR3kGI

Maragos joined the Eagles in 2014 after one year with the 49ers and three years with the Seahawks as part of then-head coach Chip Kelly's investment in the Eagles' special teams unit. Maragos was technically a safety, and he took snaps as a safety over his years in Philadelphia, but he was heralded for his contributions on special teams.

MORE: What effect do the potential holdouts by Ezekiel Elliott and Jadeveon Clowney have on the Eagles?

In the end, Maragos spent five years with the Eagles, including 2018, before they cut him this past February. He played 99 total games in the NFL.