What effect do the potential holdouts by Ezekiel Elliott and Jadeveon Clowney have on the Eagles? 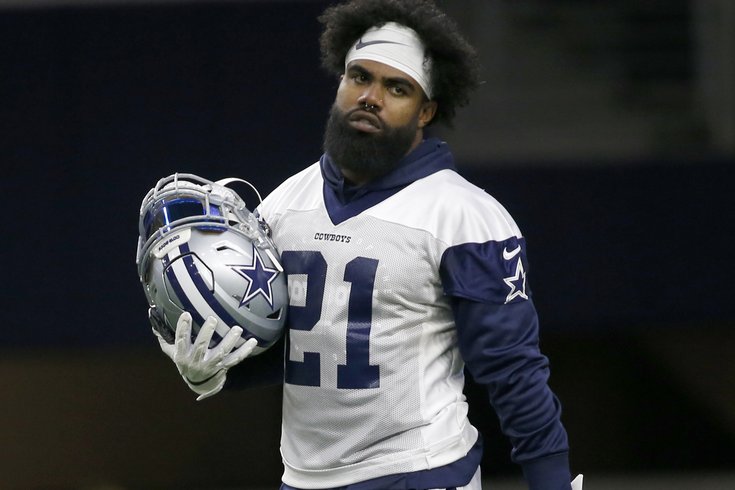 On Monday, a pair of big-name NFL players moved closer toward holding out of their teams' respective training camps.

Franchise-tagged Houston Texans defensive end Jadeveon Clowney did not work out a long-term deal before the deadline to do so came and went, and he isn't expected to show up for anything anytime soon.

Texans and franchised DE/LB Jadeveon Clowney officially did not reach a long-term deal before today's 4 pm ET deadline. He now is expected to miss a good portion of training camp. Next time Texans see Clowney could be late August or early September.

On a somewhat more surprising note, a report surfaced from Mike Florio of Pro Football Talk that Ezekiel Elliott has privately stated that he intends on holding out from Cowboys training camp absent a new deal.

Let's look at each situation individually.

Clowney and the Texans have been headed toward a holdout showdown all offseason, and the lack of long-term deal comes as a surprise to nobody. However, not only are the Texans holding firm in franchising Clowney, they're also trying to slap the tag on him at a position he doesn't play, thus lowering what they have to pay him.

NFLPA is anticipated to file a grievance against Texans over the position assigned to franchise DE/LB Jadeveon Clowney, per league sources. The Texans labeled Clowney a “DE/LB”, but a LB tag carries a $1.698 million lower salary with it than the DE tag would. So issues on issues.

To note, Schefter's tweet above isn't completely accurate. The difference between the LB designation ($15.443 million) and the DE designation ($17.128 million) is indeed just shy of $1.7 million. However, in Clowney's case, because he played on his fifth year option in 2018 at $13,306,000, he gets the greater of the franchise tag amount or 120 percent of his cap number the previous year. Since the greater amount here is the latter, Clowney would earn $15,967,200 on the tag, thus reducing the Texans' savings to roughly $1.16 million, as opposed to roughly $1.7 million.

Pissing off one of your best players — while also coming across as penny-pinching clowns to the rest of your roster — is a "penny wise, pound foolish" approach, especially for a team that has the second-most cap space in the NFL. Oh, and they'll probably lose the grievance anyway.

So how does this affect the Eagles?

Well, we've covered this at other points during this offseason, but the Eagles have about $21 million in cap space, and Howie Roseman has been known to make splash acquisitions in the past.

Of course, Clowney wouldn't come cheap.  The cost to acquire him would probably include (a) at least a first-round pick, and (b) something in the neighborhood of a $20 million per year new deal. Certainly, you wouldn't make that kind of trade without having the parameters of a deal in place.

This would be a move of the, "Eff it, let's go all in on the Super Bowl this year" variety. Obviously, in this scenario, Clowney would not be a third DE. He would start (duh), which would relegate either Brandon Graham or Derek Barnett to more of a situational role. To be clear, this is a long shot, but there's certainly an argument to be made that Clowney and the Texans are continuing to move closer to a breakup.

Elliott has undoubtedly watched this offseason as the Cowboys got a long-term deal done with DeMarcus Lawrence, and have openly acknowledged that they're working on new deals for Dak Prescott and Amari Cooper. The Cowboys, however, have reportedly not had any kind of serious talks about giving Elliott a long-term contract.

Additionally, Elliott plays a position in which it is well-documented that players wear down very quickly, comparatively speaking. It's the most taxing position in the sport. In Elliott's case, the Cowboys have used him to an extreme degree.

As we noted in our Cowboys dumpster fire post, despite missing six games in 2017 (and eight overall), Elliott leads the NFL in rushing attempts since he entered the league in 2016, by a significant margin:

The Cowboys could very well opt to just run Elliott into the ground over the next two or three years, and then say, "K, thanks Zeke, bye," like they did with DeMarco Murray.

As such, it would make a hell of a lot of sense for Elliott to hold out in order to secure a highly lucrative second contract, rather than play out the next two or three years at below market value pay. Not to mention, whenever he would be eligible for free agency, his worth likely won't be as high, given the mileage he will have racked up by then. (To note, Bob Sturm of The Athletic published a very good deep-dive post on this topic this morning before rumors of a Zeke holdout emerged).

Anyway, what you have here is (a) an organization that is right not to want to get a long-term deal done with Elliott, and (b) a player who is right to try to force a long-term deal by holding out. #Analysis: That could be bad.

So how does this affect the Eagles?

I have two points here: