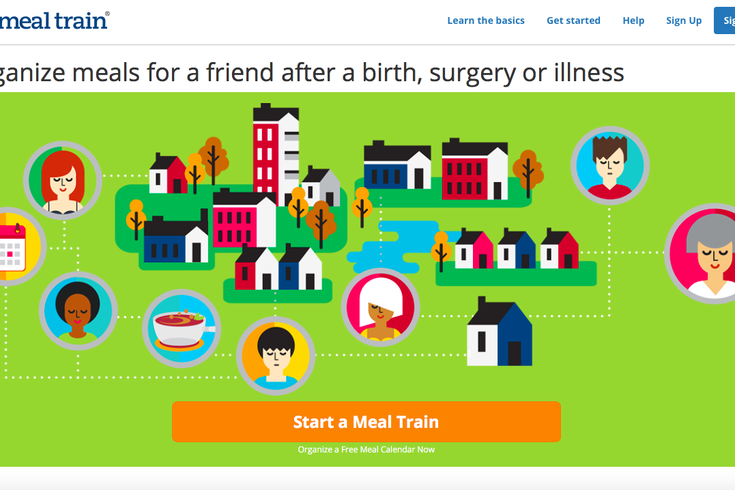 Homepage for Meal Train, a website that allows users to request meals from friends and neighbors as they navigate difficult times.

A Philadelphia couple is facing intense scrutiny and ridicule after requesting help from neighbors to navigate their exhausting experience as first-time parents.

The Fishtown residents, who expect their baby to arrive at the end of April, started a campaign on the support platform Meal Train seeking help with intricately planned meals over a 30-day-period, according to multiple reports.

RELATED: This is how much sleep parents lose after having a kid

"As the father-to-be, I’m teetering on a fence of emotions," wrote the man behind the account, which has since been deactivated. "One of the things I’m most afraid of is not getting a great deal of sleep and as a result not being in the best frame of mind to offer my wife the support she needs to recover from the child-birthing process."

A Twitter user who received an alert about the campaign on the NextDoor app posted a thread about the couple's "ridiculous" demands on the Meal Train page, which the father-to-be called a "mental-health check-in train."

The week I got a thing in my mailbox to join a social network @Nextdoor. People in my neighborhood can alert each other about crime and stuff like that. Great idea! But today someone posted the most ridiculous thing ever (1/?)

"My wife and I are having a baby. I'm starting a meal train because it is our first and neither of us have a clue what we're doing. If you are feeling neighborly" so I clicked the link bc there is no way these people are asking strangers to make them food bc they have 1 baby(2/?)

Turns out they are in fact asking total strangers to help them and with the most millennial phrasing I have ever seen in my life. (3/?) pic.twitter.com/ex0o9LBKVo

Trying not to be negative, I figured maybe it's like "if you make a lasagna and make too much, we would accept it". That would be very reasonable inside a totally unreasonable ask. BUT THERE WERE 30+ SPECIFIC MEALS WITH RECIPES pic.twitter.com/BkE2kBuhyJ

THEN THEY LET YOU KNOW WHAT THEY DONT LIKE AND IF YOU CANT ACCOMMODATE, YOU CAN COME AND DO THEIR DISHES OR VACCUUM. WASH THEIR FUCKING DISHES OR VACUUM THEIR HOUSE?!?!?!?!?! pic.twitter.com/yJ6IXJ56TW

This guy then tops it all off be telling us we can sign up for a day to text, and if they decide they would rather not see people, WE CAN COOK THEM A MEAL AND LEAVE IT FOR THEM IN A COOLER HIS WILL PROVIDE IN THE YARD BECAUSE HE COULDN'T BE BOTHERED ANSWERING THE DOOR pic.twitter.com/FXtNRgVa8Z

If I don't egg their house, I deserve an award

Among the specific meals the couple requested were "Paleo breakfast egg muffins with thinly sliced cremini mushrooms, pork breakfast sausage and three tablespoons of melted and cooled ghee," instead of, you know, takeout or chicken cutlets — something easy. Not kale whole wheat pockets.

Twitter users, though sympathetic to the strains of infant care, could not believe the audacity of the couple's requests. Others lamented the fact that the app itself points to a lack of community and general neighborly support these days.

#MealTrains are great! Supporting new parents is great! But, uh, normally it’s the *friends* of the new parents that support them with a Meal Train. I have never, ever, seen anything as bizarrely entitled as this. Good neighbors will help each other, yes, but this…is...😲

Absolutely gobsmacking.
How on earth have new parents coped for thousands of years, without a neighbourly Meal-train to help them survive?
Oh, and the menu requirements are just next-level entitlement. https://t.co/OLnJytVvgQ

I’m not a proponent of “dragging” people online, but this seems to be an abuse of the platform, meant to help people in crisis (illness, death in family, etc.)... https://t.co/QQsEACwYjV

The daughter of some friends had her baby yesterday. Naturally. At home. Their church set up a meal train. Here are the meal specifics... pic.twitter.com/0lSBV7XkAi

There is nothing wrong with the idea of a meal train at all! What’s whack here is the tone and specificity — and lack of a sense of reciprocity. Imagine if they said instead: “Is there some kind of neighborhood support group for new parents?”

So much vitriol in the replies over...people asking for help? I grew up in a NEIGHBORHOOD where everyone knew everyone, where a meal train would happen w/o being asked. Have spent my adult life looking for a neighborhood like that again. Nothing wrong w/asking neighbors for help!

The father-to-be was contacted by the New York Post and gave a bewildered response to the negativity.

“I apologize if it was taken the wrong way — and I’m frankly just very surprised and a little disheartened by … the response,” the local man said. “If they are not interested, then they don’t have to check that site or do anything. This is the world we live in.”

The last thing this couple probably needed a week before having a baby was an avalanche of criticism, but if it serves as a reality check and reminder to have gratitude for any help whatsoever, one day they may be able to laugh about this episode.

Odds are, some neighbor will make them those paleo breakfast egg muffins as a joke, anyway. They do sound pretty tasty.