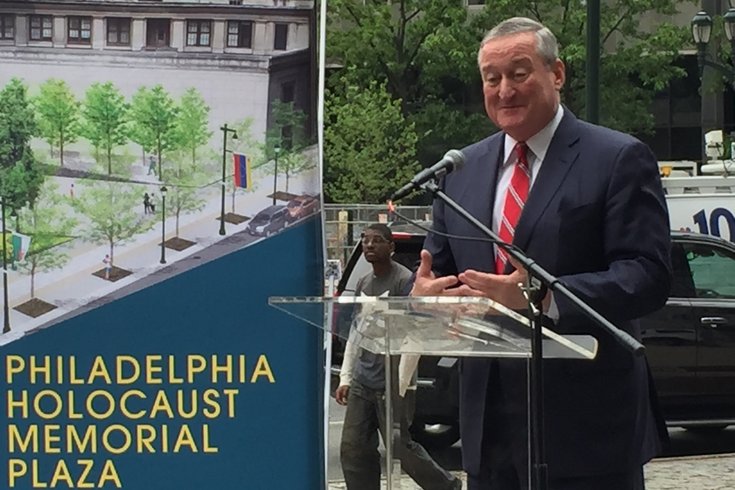 When she was just seven-and-a-half years old, Holocaust survivor Miriam Cane lost everything.

Russian soldiers took over her Belarus town and raided the home of her wealthy family.

"Everything was confiscated," she said in a interview Wednesday. "It was a harrowing experience."

She was put on a train to Siberia, where she was incarcerated for five years. The abuses suffered there have taken a toll on her body, Cane said. Arthritic, she walks with a cane, and has had eight hip replacements.

"People call me the bionic woman," she joked.

Cane finally made it back to Belarus to find her family's home was gone. The Russian army had taken everything – linens, silverware, china, family heirlooms. "Unfortunately, we returned home to nothing," she said.

At the age of 12, Cane returned to Germany as a "displaced person," but when the war ended she traveled to America to begin a new life.

The plaza will extend from "The Monument to Six Million Jewish Martyrs" statue, created by artist Nathan Rapoport and placed at 16th and the Parkway in 1964, and add new features, including memorial pillars and an eternal flame. 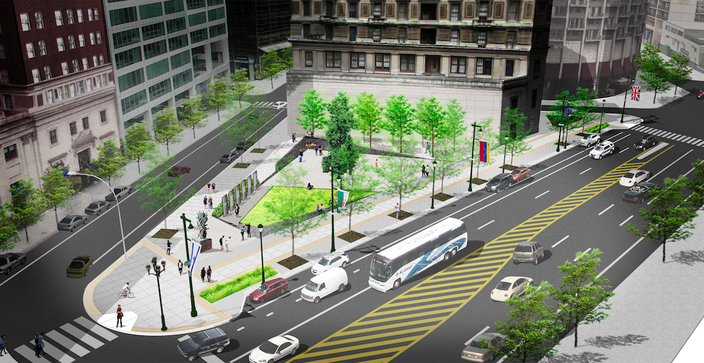 A rendering shows the proposed design of the new Philadelphia Holocaust Memorial Plaza.

According to Steve Kessler, chairman of the Philadelphia Holocaust Remembrance Foundation, the plan is to accentuate and expand upon the Rapoport memorial.

Proposed designs, he said, call for six pillars to represent the six million Jewish people who died during the Holocaust, each featuring historical information as well as a comparison of the rights that Jewish people had under Nazi rule and the rights enjoyed in our nation today, he said.

Additional elements include an eternal flame and a wall featuring railroad tracks that will tell the story of Jewish citizens who were put on trains and taken to concentration camps before and during World War II.

While the final costs of the memorial have yet to be assessed, the foundation has secured a $1.5 million grant from the state's Redevelopment Assistance Capital Program include the enhancements to the plaza, which will include a little bit of living history featured prominently.

The foundation will plant a sapling grown from a tree planted by a school teacher at the Theresienstadt concentration camp near Prague.

Kessler shared the tale of Irma Lauscher, a teacher at the camp who wanted to celebrate with Tu B’Shevat, the Jewish New Year of the trees, with her students.

A guard, Kessler said, helped Lauscher obtain a sapling which Lauscher planted in the children's quarters.

A cutting from that same tree will be planted in the memorial plaza. 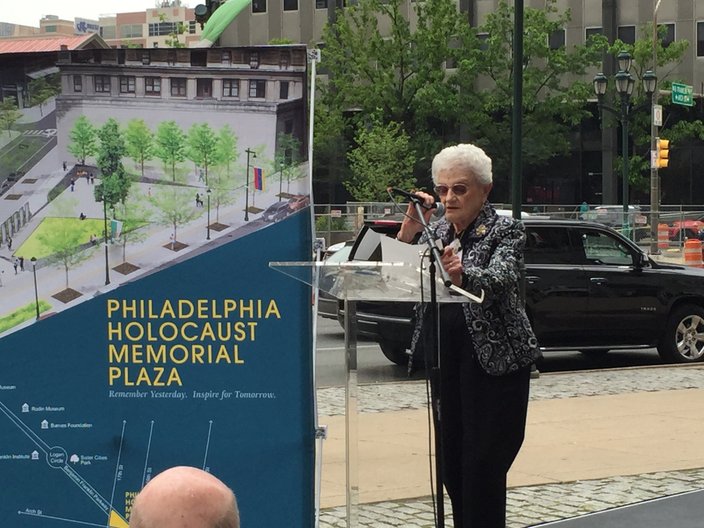 Holocaust survivor Miriam Cane speaks during an event to unveil plans for a plaza for The Philadelphia Holocaust Memorial on the Benjamin Franklin Parkway.

Mayor Jim Kenney said that as Holocaust survivors and their children age, the world loses those who can remember the horrors first-hand. Such memorials are needed, Kenney said, to help future generations to know, and learn from, the past.

"It's so important that this beautiful memorial gets enhanced," said the mayor.

In talking about the importance of remembering the past, Kenney threw a not-so-subtle jab at Republican candidate Donald Trump – who Kenney did not name – saying that he's heard too much hateful rhetoric in recent political dialogue.

"I'm fearful for our country," said Kenney. "Some of the things I've heard in alleged diplomatic speeches I haven't heard since the 1930s."

Just when construction on the plaza would begin or when it might be complete isn't known for sure. But the hope is to have the plaza completed sometime next year, Kessler said.

The Center City memorial will help the world to never forget the atrocities that took place during the Holocaust, Cane said.

"It is a mitzvah, a good deed, to remember those who died in the Holocaust. It is also a mitzvah to expand this plaza," she said.