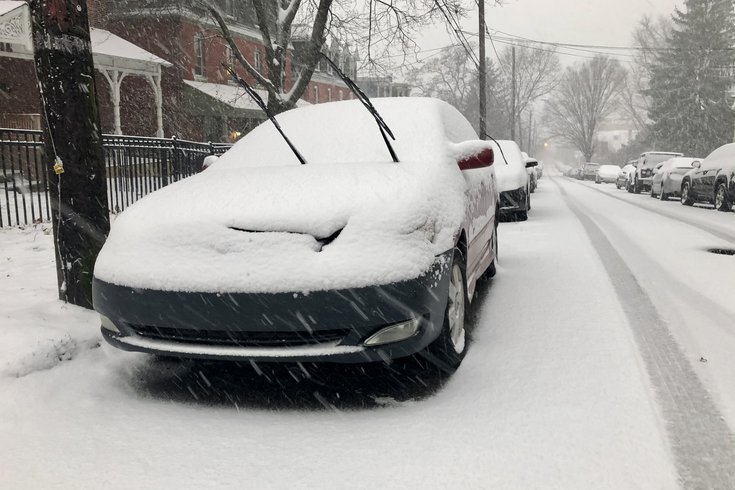 Philadelphia could see approximately 3-5 inches of snowfall late Thursday night into early Friday morning. Above is a file photo of a winter storm that hit the city in December 2020.

Get your shovels ready, Philadelphia. Snow is coming.

A winter weather advisory has been issued by the National Weather Service in advance of approximately 3-5 inches of snow that is expected to accumulate late Thursday night into early Friday morning.

The advisory will take effect for the entire Philly region at 10 p.m. Thursday and last through 10 a.m. Friday.

While some precipitation could begin before, most of the snow is forecasted to fall between 1 a.m. and 7 a.m. Friday. A narrow band of heavy snow producing up to two inches of snowfall per hour is possible. Temperatures are expected to drop to as low as 28 overnight.

The storm is expected to create slippery road conditions and could make the Friday morning commute difficult. The weather is forecasted to turn to clouds and eventually mostly sunny skies, with highs reaching near 34.

The School District of Philadelphia will operate fully remote Friday due to the anticipated impact of the storm. Several public schools were already scheduled to conduct virtual learning Friday as a result of staffing shortages caused by rising COVID-19 infections.

Trash and recycling collections in Philadelphia could be further delayed due to the storm, according to the city. Delays and cancellations are possible through SEPTA and at Philadelphia International Airport.

Camden County has issued a Code Blue advisory that will be in effect from 7 p.m. Friday until  7 a.m. next Wednesday in anticipation of extremely-cold temperatures. This allows municipalities to expand sheltering services to residents experiencing homelessness.

Friday's storm will come on the heels of the region's first official snowstorm of the season that occurred Monday. While Philly saw snow accumulations of less than an inch, parts of the Jersey Shore were buried under more than a foot of snow.

Other than some rain forecasted for Sunday afternoon into the evening hours, the weekend is expected to remain dry with mostly sunny and clear skies.

Below is the complete forecast for Philadelphia through Monday, courtesy of the National Weather Service.