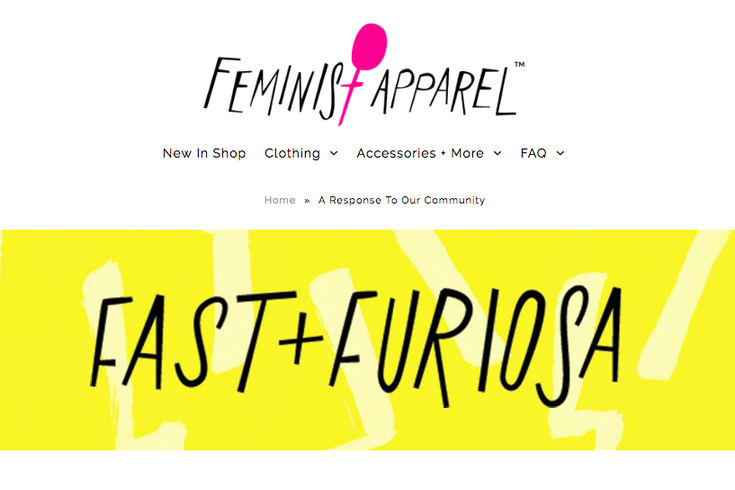 A screenshot from the Feminist Apparel website. Alan J. Martofel, CEO of the Philadelphia-based company, ays he is seeking his own replacement after his now former employees confronted him about his past admission of sexual abuse.

The CEO of Philadelphia-based clothing company Feminist Apparel said he is seeking his own replacement after some of the company's now former employees confronted him about past sexual abuses he had admitted to years earlier online.

In a statement Wednesday, Alan J. Martofel addressed the controversy that is swelling around his company on social media, sparked by the employees who were fired after meeting with Martofel to discuss previous behavior.

Feminist Apparel was founded by Martofel in 2013. The company sells clothing and accessories from individual artists, most items featuring feminist slogans printed on them. The company has received national media attention as has it grown, particularly because a man is at the helm of a company advocating for feminist empowerment. Celebrities like Ariana Grande have sported clothing purchased from Feminist Apparel's website.

The same year he founded the company, Martofel penned a lengthy Facebook post about his changing perspective of the culture of rape and toxic masculinity. In that post, Martofel wrote he has perpetrated sexual abuses and assaults on women.

"I've grinded up on women on buses and concerts without their consent. I've made out with 'the drunk chick' at a party because it was easier. I've put a woman's hand on my dick while she was sleeping," Martofel wrote in the 2013 post, which he used to announce the launch of Feminist Apparel as a platform to promote his new outlook on feminism.

According to a blog post from the former employees, they first had been made aware of Martofel's Facebook post in late June and were "shocked and disgusted" — not only the CEO's admissions, but also because Martofel had never made his employees aware of it. (Jace Gulbronson, one of the ex-employees, confirmed to PhillyVoice that he and others had written the post. None of the other former employees could immediately be reached for comment Monday morning.)

"The business and platform he created was fostered by many employees over the years to become a place where survivors, victims, and their supporters felt safe to talk about their experiences and how to support one another," the employees' post reads. "Once we finally knew the truth we realized none of us were ever safe to share in these spaces."

The former employees said they met with Martofel on Friday, June 25, and asked him to step down. He agreed to resign, they wrote, and left the office, saying he'd be in touch about the company's future.

A week passed without word from Martofel, despite numerous attempts to contact him. During that time the employees stopped taking orders, they said. According to the blog post, on Saturday, June 30, they noticed their emails had been shut down and that the website had begun taking orders again.

The next day, the company announced it had made some "necessary changes behind the scenes" and was seeking new management.

The decision only fueled anger towards Martofel and Feminist Apparel, with many condemning him on social media for his admitted abuses, for firing his staff after they confronted him about it, and for profiting off a feminist message despite his past misconducts.

"It was disheartening to find out the truth of the company’s origins and on top of that, to be fired after attempting to keep the CEO accountable was so awful it still feels surreal," the blog post from the former employees reads.

The owner of Feminist Apparel—a straight cis man—was outed for sexual abuse and fired 10 of his employees for trying to hold him accountable. All money being made by the company is going to him right now. This needs to stop, and people need to be aware of what’s happened.

Don't support abusers. Don't shop at #FeministApparel.
Please make this go viral. Employees learned about CEOs past as an abuser. They confront him about it, a week and a half later they are all fired. All of this is real life. MAKE THEM VIRAL. pic.twitter.com/AfXs9uJdCt

@FeministApparel Woooooow. You’re a POS Alan. CIS white male started a company profiting off of #sexualassault victims, is an abuser himself. Has fired everyone who spoke up about it, and fired designers after he got all the money he could out of them. #allaboutthemoney #metoo

I just found out that @FeministApparel is run by sexual abuser Alan Martofel, who fired his entire staff without notice in order to avoid being outed as a predator who profits off "end rape culture" slogans and fakes support of victims of assault when he actually is the assaulter pic.twitter.com/TTibYLkEtx

my old boss alan martofel (white cishet man) at feminist apparel has just been outed as an abuser & he fired all of his employees (mostly queer ppl & poc) in the wake of this info coming out. he's now trying to hide it and hire all new ppl. DO NOT SUPPORT FEMINIST APPAREL

In his statement posted to a blog clothing company's website on July 4, Martofel confirmed he had decided to move on without his employees, writing that he made the decision after he had been "made aware that they (the former employees), unequivocally, do not share my views on either business or feminism."

Martofel wrote customers waiting on orders would receive them, and any artist who wanted their work taken down from the website should contact him. He also included a screenshot of the 2013 Facebook post that his employees had confronted him about.

"This was not a private message someone dug up. This was something I went out of my way to share with my community at the time as a means to spark dialogue around the negative impact of toxic masculinity," Martofel wrote. "I acknowledged my wrongdoing and committed myself to work within this movement."

On Facebook, Martofel wrote the company still seeks a new CEO. No timeline was given for that process, and Martofel did not specify whether he would continue to have a role in Feminist Apparel's future. Contacted by email by PhillyVoice, Martofel declined to answer further questions about the situation and replied that his blog post "encompasses my current public thoughts on the matter."

"This entire situation has been sad and difficult and I'm going to continue needing to take time to reflect on it further before I'll be ready to say more," he said.

This is a developing story and will be updated as new information becomes available.