Philadelphia police say charges are pending amid an ongoing investigation 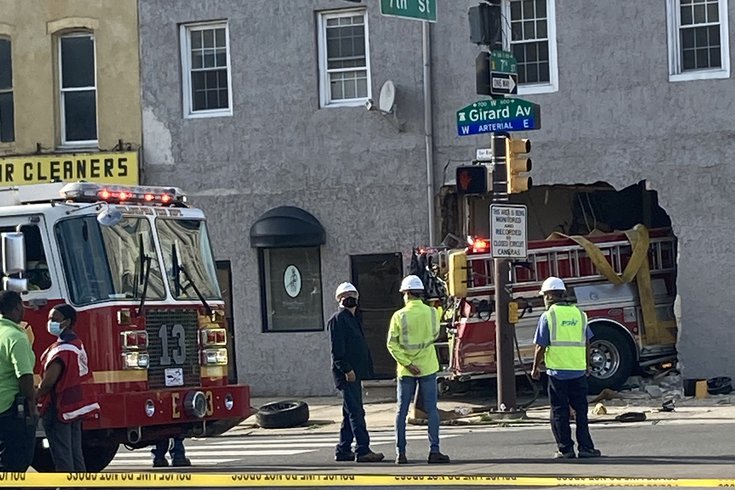 A Philadelphia Fire Department truck crashed into a building at the corner of Seventh Street and Girard Avenue following a collision with another vehicle on Thrusday, May 27, 2021.

Four Philadelphia firefighters and one civilian were injured Thursday afternoon when a collision on Girard Avenue sent a fire truck through the wall of an apartment building on the corner of Seventh Street, police said.

Charges are expected to be filed in the crash pending the completion of an investigation, according to authorities.

Just after 4 p.m., a fire truck from Engine 29, at Fourth Street and Girard Avenue, was called to a house fire near Front and Dauphin streets. The truck was traveling eastbound on Girard Avenue.

Four PFD members on Engine 29 were involved in a crash this afternoon while responding to a call near Front & Dauphin. All four firefighters and a civilian who was in a vehicle received EMS care and were transported to hospitals.

The fire truck's lights and sirens were active when it crashed into a Black Toyota Avalon traveling westbound on Girard Avenue, police said. The Toyota, occupied by a 28-year-old male driver, was attempting to make a left turn to continue onto North Franklin Street when it was struck by the fire truck. The truck hit a median on Girard Avenue and then struck a third vehicle, a Toyota 4-Runner that was parked and unattended, before crashing through the first floor of the property.

Four firefighters inside the truck were injured and the man in the other vehicle also was hurt. All of the crash victims were taken to nearby hospitals with non-life-threatening injuries.

Officials from the city's Department of Licenses & Inspections were called to the scene to assess the structural integrity of the building.

Residents were advised to avoid the area of the crash during the investigation.

*TRAFFIC ADVISORY* Avoid the area of 7th and Girard until further notice. Vehicle crash involving @PhillyFireDept apparatus while responding to assignment. First responders are on location. *Street Closures on Girard from 6th-8th in both directions, and 7th from Girard to Poplar*