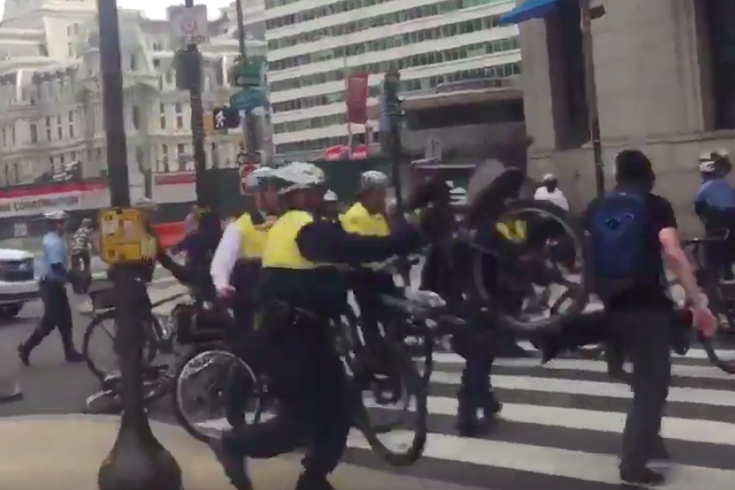 A Philadelphia Police officer was captured on film swinging a bicycle at a protester near the Pennsylvania Make America Great Again March near 16th and Arch Streets, Saturday, March 25, 2017.

Philadelphia police confirmed Monday that its Internal Affairs Division has launched an investigation of an officer captured on video swinging a bicycle at a protester near Saturday’s Pennsylvania Make America Great Again March.

The four-second video – filmed at 16th and Arch streets – was posted on Twitter by local writer Joshua Scott Albert just after 1:30 p.m. Saturday. It has since went viral.

When it starts, the unknown officer has already lifted his department-issued bicycle in two hands. He then takes a couple steps toward a protester who’s walking away from him and swings it.

The action goes out of frame as he’s swinging the bicycle in front of him. While it appears to make contact with the protester’s backpack, that impact isn’t entirely clear in the video. But, within a second, the protester can be seen running off as the officer places the bicycle back down on the street.

“We are aware of it, and Internal Affairs is looking into it,” Sgt. Eric Gripp of the department’s public affairs unit told PhillyVoice on Monday morning. “We’ve heard from community members who are concerned about what they saw.”

Albert, a local writer who was covering Saturday’s march and counter-protest for MassAppeal.com, posted several videos from the scene of conflict between police officers and protesters.

He noted that an IA investigator reached out to him about his videos from the protest as police “are seeking additional information and insight if you are willing to provide it.”

Albert said he was willing to cooperate and agreed to meet with investigators on Monday afternoon as they try to identify the officer through video posted by Albert and, if possible, video captured by nearby businesses.

Albert offered some context leading up to the confrontation.

He said Antifa protesters had gathered at Logan Circle and started heading back toward 16th and Arch streets when it became clear that the MAGA march was continuing in that direction.

Albert said he was sure what happened leading up to the event he captured on video and doesn’t know what inspired the officer to swing the bike.

From his perspective, the protester was merely walking away when the bike went airborne.

“He wasn’t being aggressive,” Albert said of the protester, who appeared to be struck by the bicycle’s back tire, he said.

The protester – whose identity he doesn’t know – wasn’t arrested at the scene and made his way back toward JFK Boulevard afterwards, Albert said.

Watch this @PhillyPolice officer hit this protester with his bike out of nowhere pic.twitter.com/uZ3Qt91FkH