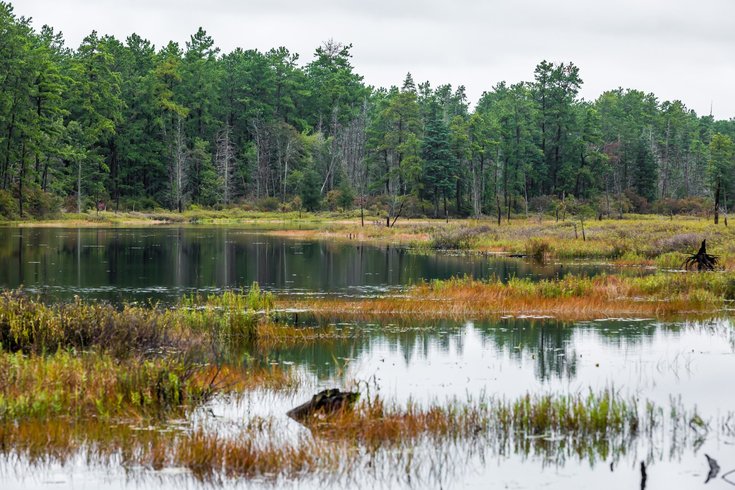 Teens with a New Jersey YMCA planted 400 trees in the Bucks Cove Run Preserve in Pembertown Township, Burlington County, on Aug. 8, only for the trees to be destroyed by ATVs the following Monday. This photo shows a portion of the Pinelands, but not the area where the trees were destroyed.

A group of teenagers planted 400 trees in Burlington County in an effort to preserve the Pine Barrens wetlands, but just days after the group effort, the trees were destroyed by off-road vehicles and replaced with trash.

The YMCA, in partnership with the Pinelands Preservation Alliance, were attempting to revive the a portion of the Pinelands and protect the habitat for the endangered species that call the area home, including the Pine Barrens tree frogs. The area been destroyed previously by off-road vehicles, such as ATVs, Burlington County Times reports.

Pinelands Preservation Alliance posted to Instagram, "We planted 400 Atlantic White Cedars today with @ymcaofthepines in a wetland area that was severely degraded by off-road vehicles."

Not long after area was restored, James Howell of the Pinelands Preservation Alliance found 4x4 tire tracts, burning trash, and all 400 trees destroyed that following Monday. He had returned to the area in order to install barriers.

Howell called the incident "disappointing." He noted to the Burlington County Times, "Where we just planted — it was very obvious. It's not like someone would have mistook that for something else."

The alliance worked to clean up the Bucks Cove Run Preserve for more than a month. Howell noted that the alliance has had issues with vandalism over the past year.

Carol Yard, outdoor center director for YMCA of the Pines, told NJ.com that the trees will not be replanted again until the state builds barriers in Brendan T. Byrne State Forest.

Off-road vehicles are prohibited on Pinelands land managed by non-profits and the state. However, licensed and registered vehicles can be driven on the roadways.