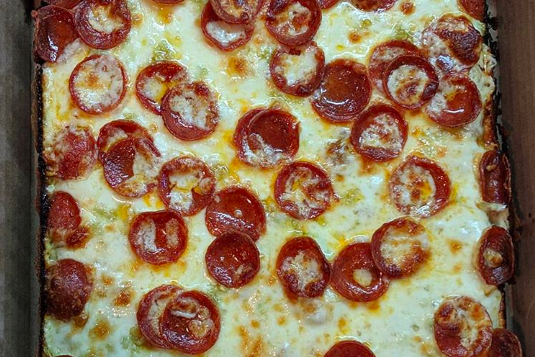 Owner of Pizza Gutt, formerly of W/N W/N coffee bar, has moved into a permanent brick-and-mortar location in Kensington to sell his signature square pies. The new restaurant will be called Circles + Squares.

The shop will be renamed Circles + Squares at 2513 Tulip St., which was formerly the Lil' Lina's Slices & Scoops. Gutter told PhillyMag he's hoping for a May 1 open.

This will be Gutter's first space just for pizza — no bar, no coffee, and he's adding circle pies. The location was previously operated by the owners of Bourbon & Branch, who have partnered with Gutter for the project.

I can't bite my tongue any longer. New (to me) pizza shop on the corner of Tulip and Firth (19125) Its super mom and pop and reminds me a bit of the shop I worked at growing up. I am so excited, but since you really aren't supposed to break news Friday afternoon, more details to come next week :)

Pizza Gutt first lived on Instagram, untethered to a shop or timeline. Then, Gutter moved the operation to W/N W/N coffee bar at Ninth and Spring Garden streets, where it lived for more than a year. His last service there was on March 9, as the bar has closed for the time being.

If you've never had one of his pies or a late-night slice at W/N W/N, go check his Instagram and promptly put May 1 on your calendar.