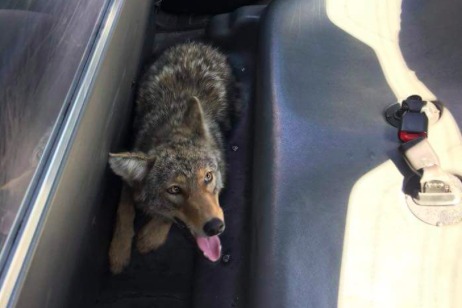 We've been hearing about coyotes and "coywolves" prowling the streets of the Philadelphia area for a few years now.

Here's your conclusive evidence that this isn't a hallucination.

Police in Philadelphia's 15th District tweeted Monday that they had captured a coyote spotted on the 4200 block of Greeby Street in Mayfair, not far from Pennypack Park, according to a department spokesman.

Good job15th officers today call for coyote on the streets it was caught and released back to Enviromental center pic.twitter.com/pVneSl2lP0

A 15th District spokesperson said the report of the capture on file took place between Comly Street and Van Kirk Street, nearby Moss Park.

The animal was captured using a dog noose and transported in the back of a police car to meet with officials from Parks and Recreation, the 15th District spokesperson added. From there, the coyote was taken to Game Commission officials and released at the environmental center off Veree Road, near Pennypack Park.

The Game Commission could not immediately be reached to confirm the location of the animal's release.

Reports of coyote or "coywolf" sightings have picked up in recent years in the Northeast United States.

Some biologists believe Interbreeding between farmers' dogs and wild coyotes produced a fierce, all-terrain predator whose numbers may have risen into the millions. Deforestation and hunting likely helped drive these hybrid canines down to the northeastern states from Canada.

In March of last year, several residents in Roxborough reported seeing paw prints belonging to a coywolf. Another viral post from police in Upper Merion appeared to show a coyote in the backyard of a residence about a month before the Roxborough sightings.

In a blog post at the Schuylkill Center for Environmental Education, executive director Mike Weilbacher explained that he had been receiving calls about coyotes and eyewitness reports for the past few years. Wellbacher analzyed the footprint and determined it could not have been a dog.

An official "eastern dog" species has not yet been declared, but it is possible the inheritance of DNA from dog breeds such as Doberman pinschers and German shepherds may have created genetic differences significant enough to separate these canines from their ancestors.

Coyotes generally feed on small rodents and don't pose much of a threat to humans because they're naturally shy. They have been known to pick at exposed trash, however, and an attack was reported in January of last year while a New Jersey man was walking his dog in Washington Township's Columbia Trail.

Residents are advised to secure their trash cans and protect their pets in areas where coyote sightings have been reported. Sightings in the Philadelphia area can be relayed to Wellbacher at the Schuylkill Center for Environmental Education.