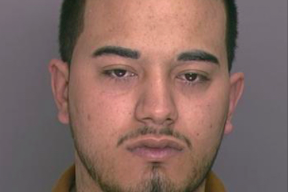 The Philadelphia Police Department has revived an arson cold-case that left five people dead in a "Molotov cocktail-style" bombing that allegedly ignited an Olney rowhome in the hours after a bar fight on Nov. 18, 2003.

According to the Northeast Times, Philadelphia Police Captain James Clark announced last week that 33-year-old Abdu Rivera has been arrested in connection to the firebombing that killed his own family members, including a 3-month-old child.

Cold-case detectives moved to arrest Rivera after convincing witnesses to open up about the incident, which police say involved multiple suspects still targeted in an ongoing investigation.

Authorities believe the firebombing occurred after a bar fight between then 20-year-old Rivera and John Santiago, a trained boxer who was killed in the fire along with his wife, mother, brother, and daughter. Detectives say Rivera and several friends were beaten up by Santiago around Second and Ontario streets, prompting an extreme act of retaliation in the ensuing hours.

At around 3:30 a.m., Rivera allegedly tossed fuel-filled containers into Santiago's home, located on the 100 block of Widener Street. At the time, eight family members were in the house. Flames reportedly blocked the front entrance and the back door was bolted shut. Four of the relatives managed to escape, but one of them eventually succumbed to his injuries, leaving three survivors.

At the time, according to 6ABC, fire officials found the remnants of a plastic container with flammable liquid inside and determined the blaze was intentionally set. The case was reopened in 2014 with a $100,000 reward, which police say will be given to a person who assisted with the investigation.

Rivera, an ex-convict, was acquitted of two murders and two assaults in the mid-2000s. He was previously convicted of felony involuntary manslaughter and served six years in prison for a pair of firearms charges. He is currently being held without bail at the Cur­ran-From­hold Cor­rec­tion­al Fa­cil­ity and a preliminary hearing is set for May 11.