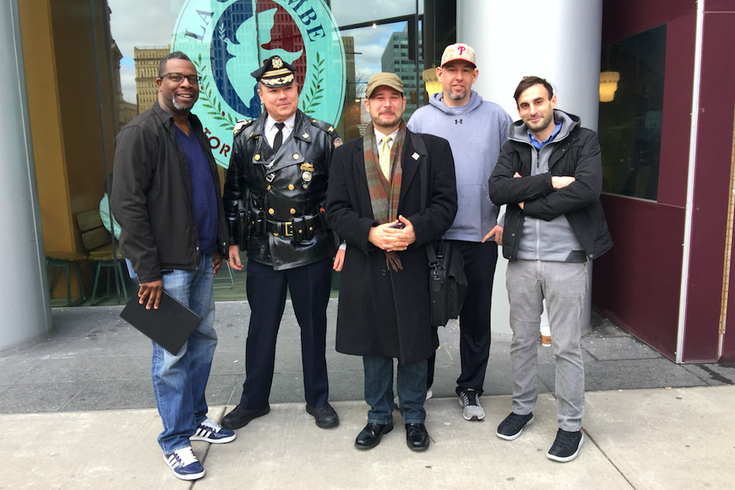 On Friday, people will flock to Rittenhouse Square with marijuana for a 4:20 p.m. “Toke Back the Wall” event organized after this week’s controversy regarding park-goers’ ability to sit on the “historic balustrades” there.

On Thursday morning, a trio of cannabis activists met with representatives of the Philadelphia Police Department at a coffee shop near City Hall to discuss specifics.

Most notable among the topics: participants will be issued citations for smoking in a public park where such activity is banned.

While that reality might put the fear of a $25 or $100 fine into some would-be participants, Chief Inspector Joe Sullivan made clear that police response will not involve “the A-word."

“It’s not an arrest. It’s a simple citation,” he said after the 20-minute briefing with police and activists Chris Goldstein, Nikki Allan Poe and Mike Whiter. “This a peaceful act of civil disobedience (in the spirit of) Martin Luther King Jr., and we appreciate that. They’re protesting and exercising their First Amendment rights.”

He also noted beforehand that, in light of protests planned on the day of Donald Trump’s inauguration, the smoke-in could be “the least of my concerns.”

Huddled around two tables in La Colombe across the street from City Hall’s southwest corner, the activists and seven police representatives hashed out specifics of what would happen at Rittenhouse Square on Friday. There, mobile phone numbers were exchanged amid discussions about focusing on the organizers when it came time to issue citations.

Police wanted to ensure that the protest is contained to the park, not venturing onto surrounding streets, a request they were assured would be respected. As Whiter put it, the marijuana events – like the pop-up garden near the Art Museum last year – are “self-policing.”

For his part, Poe noted that some may be “scared away” from participating when they learn they could be hit with a citation. There was a joking discussion about meeting at 3:45 p.m. Friday “to do a walk-through.”

Goldstein estimated that 175 people had RSVP’d to an event listing on Facebook and said that police might want to bring ashtrays for the people being hit with citations to put their joints.

“The No. 1 rule we’re telling people is ‘don’t freak out,” said Goldstein, noting that one facet of the protest is to demonstrate how to discretely smoke marijuana in public so as to honor Mayor Jim Kenney’s Tweeted request that smokers not “smoke weed so obviously that you scare olds my age.”

Officers assigned to the park will have a recreational vehicle, likely on the park’s Locust Street side, to process the citations.

“Come over to the RV with an ID in one hand and a joint in the other. Give us this, give us that. It’s not rocket science,” explained one ranking officer who will be on the protest detail. 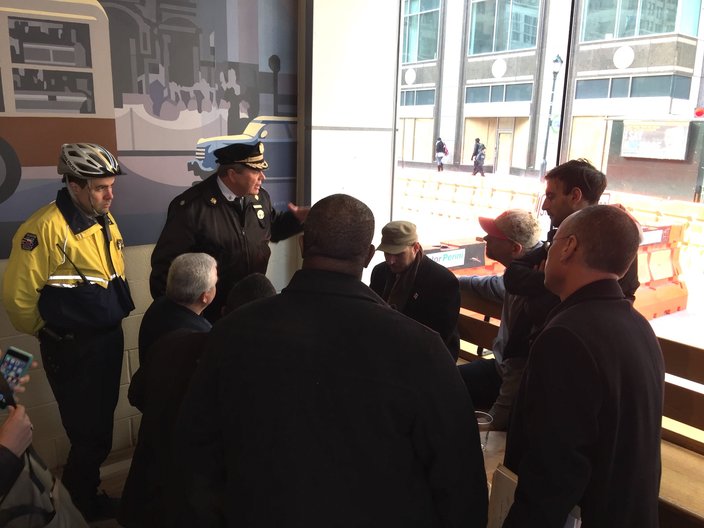 Philadelphia Police and cannabis activists gathered at a Center City coffee shop on Thursday morning to discuss logistics of the Friday afternoon 'Toke Back the Wall' protest in Rittenhouse Square.

Near the end of the affable, productive 20-minute meeting, Inspector John Heath of the traffic district had one recommendation.

“Please make sure people don’t run,” he said. “If someone does, it goes out over the air (police radio) that they ran.”

To Sullivan, the meeting marked another positive in the relationship between police and the activists.

“This is a good example for other protesters,” he said of the meeting and open lines of communication. As for whether protesters would get citations of $25 (for possession) or $100 (for publicly smoking), he noted, “We’ll find out based on what we observe.”

For his part, Kenney took notice of the meeting.

"Our police department has a great history of working with organizers in advance of demonstrations," he said. "These conversations help ensure the events are safe for passersby and demonstrators, and they ensure the demonstrators feel their message isn't impeded by police presence."

The protest has its roots in two things. First, it's timed to the Trump inauguration. Second, it came in response to last week's controversy surrounding the Friends of Rittenhouse's group to ban sitting atop the walls in the middle of the landmark Center City park.

A spokeswoman for the Friends group, which works in a public-private partnership with the city Parks & Recreation Department to fund and manage many programs and projects on the square, cited marijuana smokers as part of the reason of the push, which city officials ultimately reversed after public backlash.