Maryland gets $27 million grant to study Baltimore to D.C.

The federal government has awarded $27.8 million to Maryland for a potential bullet train that would get commuters from Baltimore to Washington D.C. in just 15 minutes.

But the full line proposed by the company developing the train would include Philadelphia, and mean getting from the City of Brotherly Love to the Capital and New York in just double that time.

The Federal Railroad Administration announced the grant to the state of Maryland on Friday for the "preconstruction and planning costs for the potential development" of the maglev train between D.C. and the state's largest city.

“The ability to travel between Baltimore and Washington, D.C. in only 15 minutes will be absolutely transformative, not just for these two cities, but for our entire state,” Maryland Governor Larry Hogan said in a press release. “This grant will go a long way in helping us determine our next steps in this transportation and economic development opportunity.”

The Northeast Maglev (TNEM) is the company that developed the train, inspired by Japanese high-speed rail systems, that uses magnetic forces to reduce friction and levitate just inches off the ground to reach speeds up to 300 mph.

The full plan for the Northeast Corridor doesn't stop in Maryland, but includes stops in Philadelphia and New York on an express train, and separate stops in Wilmington and at Philadelphia International Airport on the full line. 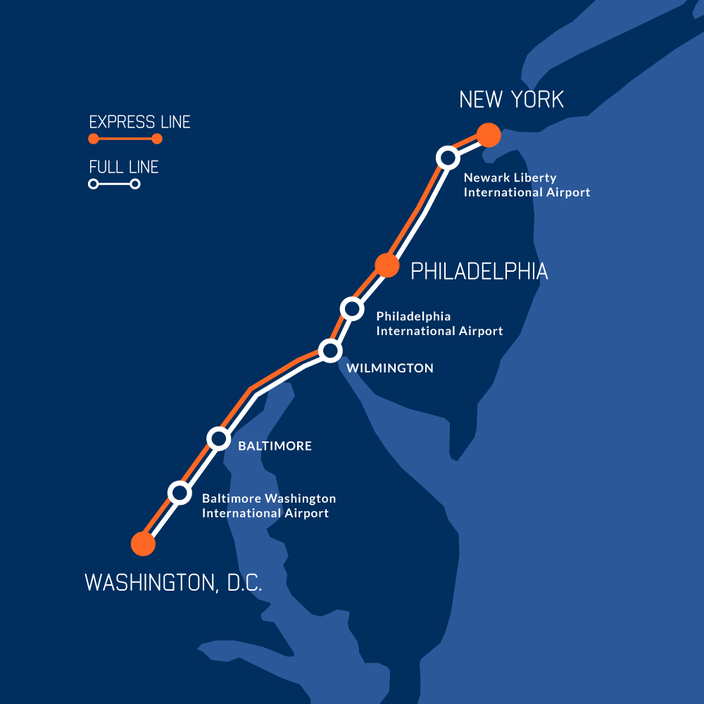 TNEM CEO Wayne Rogers said in September that Philly to Baltimore would take just 15 minutes. Philly to D.C. and New York would take about 30 and 25 minutes, respectively.