Olympic Medalists Herb Douglas (second from left) and Anthuan Mayback (third from left) join Jesse Owens' granddaughter Gina Strachan (second from right) on stage at the Prince Theater on Thursday, Feb. 18, 2016 for a panel discussion on the movie "Race."

The movie "Race," in theaters Feb. 19, is based on the true story of American Olympic athlete James Cleveland "Jesse" Owens, who competed in Track & Field during the 1936 Olympics in Berlin and won four gold medals. The title serves a dual purpose in explaining the film, as it is as much about running as it is about skin color.

Audiences will watch as Owens, winningly portrayed by Stephan James, must overcome obstacles as an athlete, as a black man and as a leader beginning with his first day at Ohio State University through his victorious return from Germany.

Major plot points follow Owens' friendship with legendary Ohio State Coach Larry Snyder (Jason Sudeikis), Owens’ struggles with the NAACP, whose leaders suggested he shouldn’t go to Berlin, and the acknowledgment that neither Hitler nor U.S. President Franklin D. Roosevelt shook the Olympic Gold Medallist's hand. Viewers might expect the Nazi racism, but they are also reminded of America's own history of racial segregation.

Seeing an authentic perspective is a theme throughout the film and one discussed during a pre-screening panel held at the Prince Theater on Thursday, Feb. 18.

Gina Strachan, Owens' granddaughter, joined the panel alongside Olympic Medalists Herb Douglas and Anthuan Maybank, and Sharmain Matlock-Turner, CEO of the Urban Affairs Coalition. The star of the film, James, also made an appearance via Skype. 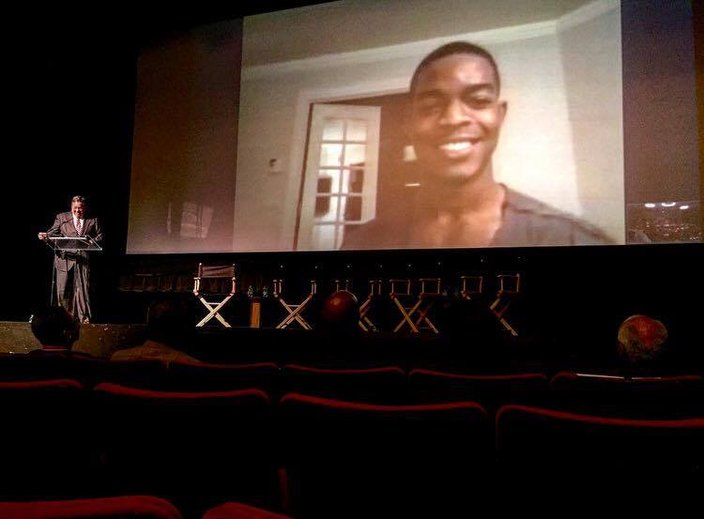 Actor Stephan James who plays Jesse Owens in the movie “Race“ Skypes with the audience at the Prince Theater before the movie premiere on Thursday, Feb. 18, 2016.

Recreating an icon on the big screen is daunting, but luckily Owens' family had a large role in the production.

"There were several revisions before we got to this [final production]," Strachan shared, also stating that she felt the film was very true to her grandfather's story.

Douglas, who competed in Olympic Track & Field events 12 years after Owens, agreed. At age 14 he met Owens, who was very influential to him, and their friendship lasted a lifetime.

"We talked on the phone during the last 20 years of his life, two to three times a month," Douglas said.

With sources close to Owens confirming the film shows a mostly true account of his Olympic journey, viewing the racially charged moments on screen become that much more powerful.

"[The film] reminded me of the struggle that so many people have to go through each and every day," Matlock-Turner said, "As important as books are and reading the story, I've got to say that seeing the personality of Jesse Owens [on screen] ... is something I will never forget."

"Race" debuts nationally Feb. 19. (Attendees should also look out for a shout-out to Temple University in the film!)