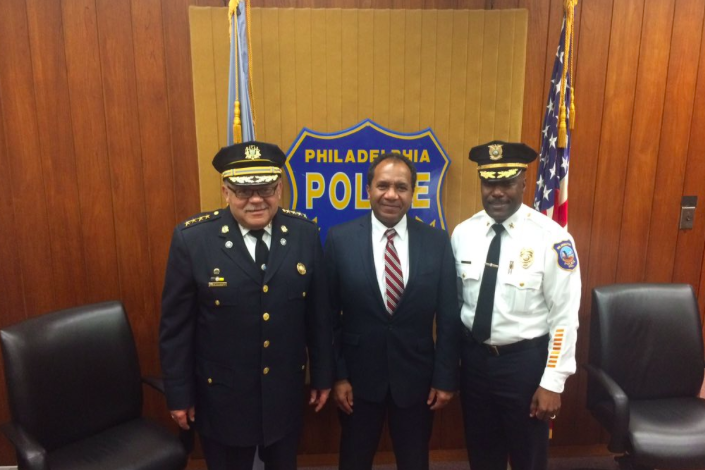 It did not take long for Charles Ramsey to find new work, an unsurprising development given the former Philadelphia police commissioner's expertise. And Ramsey won't have far to travel.

Wilmington officials announced Monday that the city has retained Ramsey as a public safety consultant for its police department. He particularly is being brought on board to assist Police Chief Bobby Cummings in implementing violence reduction strategies.

Violent crime dropped considerably during Ramsey's eight-year tenure in Philadelphia. Homicides fell from 391 in 2007, the year before Ramsey took the helm, to 280 last year. Homicides bottomed out in 2013 when the city recorded 246.

Ramsey also oversaw a similar decline in Washington, D.C., where he served as chief of the Metropolitan Police Department from 1998 to 2006. He got his policing start in his hometown of Chicago, where he topped out as deputy superintendent.

“Commissioner Ramsey has been recognized as one of our nation’s leading public safety officials and is regarded as being at the forefront of modern-day policing,” Wilmington Mayor Dennis P. Williams said in a statement.

Ramsey will join Williams, Cummings and the command staff for weekly meetings discussing the implementation of policing and crime reduction strategies, city spokeswoman Alexandra Coppadge said. He will receive up to $16,000 per month for seven months of work.

Williams reached out to Ramsey after he announced his retirement to gauge his interest in working with the Wilmington Police Department, Coppadge said.

"Mayor Williams and Commissioner Ramsey had a relationship while he was still the commissioner for Philadelphia," Coppadge said. "The mayor and Chief Cummings would sometimes reach out and pick his brain to get advice. ... He has invaluable experience and knowledge in this area of public safety."

Wilmington often is cited among the most dangerous small cities in the United States. Newsweek dubbed the city 'Murder Town USA' in a story two years ago. That story noted Wilmington had a violent-crime rate of 1,625 per 100,000 people in 2013, more than four times the national rate.

Ramsey announced in October that he would retire from his Philadelphia post when Mayor Michael Nutter's term expired. But he pledged to continue some type of police work.

"I've been at this a long time," Ramsey said at his retirement announcement. "I'm not tired. I'm not burned out. In fact, I'm actually in my prime. There [are] a lot of things I'm still trying to do in the area of policing, but it's time to move to another level. I think I can have a great impact nationally on many of the issues that are facing law enforcement today."

Ramsey served as co-chair of President Barack Obama's Task Force on 21st Century Policing following the civil unrest that began in Ferguson, Missouri, and spread to urban communities throughout the country. He also asked the U.S. Department of Justice to investigate the city's use of lethal force, an action that led to a report filled with dozens of recommendations.

"As Commissioner Ramsey has led major metropolitan police departments in cities such as Chicago, Washington D.C. and Philadelphia, I look forward to gaining his insight and perspective on implementing crime reduction strategies with the Wilmington Police Department,” Cummings said in a statement.

Ramsey came out of retirement to head the Philadelphia Police Department after Nutter was elected mayor in 2007. He was the longest-serving police commissioner in Philadelphia history.

Nutter was so impressed with Ramsey's performance that he teared up at Ramsey's retirement announcement in October.

"Thank you for making my city a safer city," Nutter said. "Children and adults of my city owe you a tremendous debt of gratitude. There are young people alive who 10 years ago might not have lived in your city but because of you."

Richard Ross was sworn in as Philadelphia's new police commissioner last week after being tapped for the position by Mayor Jim Kenney.