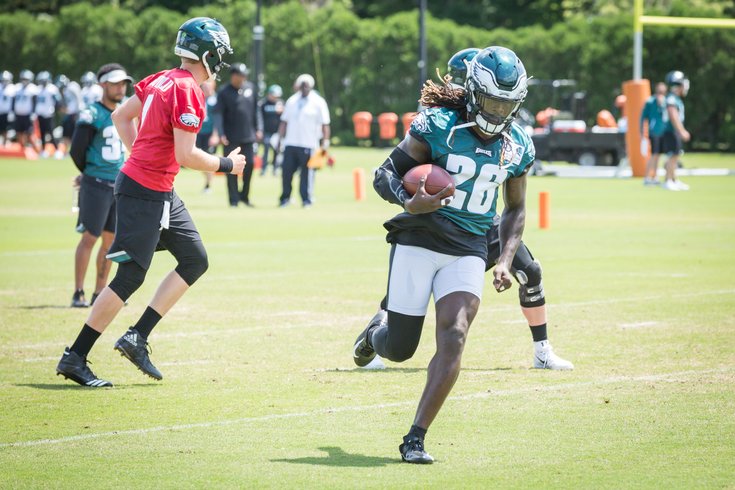 Jay Ajayi during OTAs at the NovaCare Complex.

Since I was preoccupied with my dumpster fire articles all last week, let's take a minute to catch up on some of the things that happened around the league over the last week during this dead period of the NFL calendar.

The Legion of Boom is no more. Richard Sherman is now a 49er, Earl Thomas seemingly doesn't want to be in Seattle anymore, and Kam Chancellor's career is over after he cited fear of paralysis after sustaining a serious neck injury in 2017.

Chancellor didn't specifically use the word "retire," and for good reason. Per Gregg Bell of The News Tribune, Chancellor will collect on $12 million by not "retiring."

The extension he signed last Aug. 1 guarantees him $6.8 for this year and $5.2 million in 2019. Officially retiring would mean he would not get that money.

The extension he signed last Aug. 1 guarantees him $6.8 for this year and $5.2 million in 2019. Officially retiring would mean he would not get that money.

In other words, Chancellor will be a burden on the Seahawks' salary cap for the next two seasons.

In addition to the Seahawks' secondary looking nothing like it once did, pass rushers Michael Bennett and Cliff Avril are also gone.

As for Chancellor, there are some who are calling him a Hall of Famer. Huh? While certainly a great player with an impressive highlight reel of big hits, Chancellor doesn't have anything close to a Hall of Fame resume. A quick comparison of his numbers against Brian Dawkins', for example:

Dawkins played twice as long as Chancellor, but his stats still drastically dwarf Chancellor's, and Dawkins didn't even get in on his first try for induction.

And then there are these other retired guys (in addition to some still-active players like Thomas), who are going to get in before Chancellor ever has a shot:

Anyway, the Seahawks' loss of talent was swift, and they will be an interesting team for the Eagles' front office to study in terms of building a team that can sustain success over the long haul.

Jameis Winston suspension was made official

We already knew this was happening, but the NFL made it official that Winston is suspended for the first three games of the season in 2018. The Eagles play in Tampa Week 2. The Bucs' backup is Ryan Fitzpatrick.

In 2015, during a disastrous Eagles season, Winston lit up Chip Kelly's defense, throwing five touchdown passes in a 45-17 rout. That was Winston's only career game against the Eagles.

Fitzpatrick, meanwhile, has faced the Eagles five times with five different teams. He is 1-3-1 in his career against Philly, with the most memorable of those games being the "Donovan McNabb didn't know games could end in a tie game" in 2008.

The Eagles were already going to be heavy favorites Week 2, but that game became even easier.

Heading into the final year of his rookie deal, Jay Ajayi hired Drew Rosenhaus to be his new agent.

As we noted in the Eagles' dumpster fire piece, if I were a betting man, I would say that 2018 will be Ajayi's last season with the team, as he may become too rich for the Eagles' blood when he hits the free agent market after the 2018 season.

When Eagles fans think of Rosenhaus, they of course think of him repeating the phrase "Next question" during a media session amidst the insane Terrell Owens drama during the 2005 season. More hardcore fans will also remember that Rosenhaus was the agent for Evan Mathis, when Mathis and Chip Kelly butted heads prior to the 2015 season, ultimately leading to Mathis' senseless release.

However, Rosenhaus and Howie Roseman have a good working relationship and a history of striking deals, most recently Nigel Bradham re-signing with the team in March. If anything, Ajayi's hiring of Rosenhaus increases the chances of Ajayi staying in Philly after this season, though I would still consider it more likely than not that he moves on.

Carson Wentz finished at No. 3 overall in that NFL Network Top 100 list

Only five Eagles players made the Top 100 list. They were Wentz (3), Zach Ertz (68), Fletcher Cox (69), Lane Johnson (95), and Malcolm Jenkins (96). In my view, Cox, Johnson, and Jenkins were all rated laughably low, and several other Eagles players worthy of a spot in the Top 100, like Jason Peters, Brandon Graham, Jason Kelce, and Brandon Brooks, for example, did not make it at all.

Still, the level of respect that Wentz has earned among his peers in just two seasons coming from a Division I-AA school in North Dakota State is remarkable. The only two players rated higher than Wentz were Patriots quarterback Tom Brady and Steelers wide receiver Antonio Brown.