Ranking every Eagles wide receiver ever 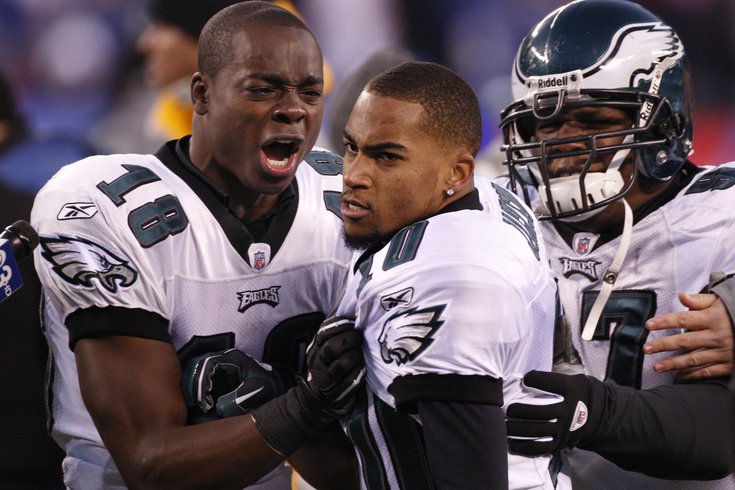 Jackson and Maclin —two of the greatest.

In putting together the ranking below — which is an averaged out top 40 list that includes every Eagles wide receiver to catch at least 50 passes — there is one clear observation to be made.

If Donovan McNabb — who was our pick as the top quarterback in franchise history (by a hair) had gotten any kind of help at wide receiver, perhaps his career and his stint as QB1 for the Birds might have resulted in one or more Super Bowl titles.

McNabb had two seasons (he actually had 21 games) of Terrell Owens and two seasons (25 games) of DeSean Jackson, two of the top four receivers on our list. After that, McNabb was doing everything he could, throwing to the likes of Todd Pinkston, Reggie Brown, Kevin Curtis, Greg Lewis, Freddie Mitchell and others ranked outside our top 15. Yes, he also had a little Jason Avant and a rookie Jeremy Maclin — but the point stands.

The forward pass hasn't been around for very long, when compared to historical records for other sports. The fact that McNabb had such little by way of talent at the receiver spot relative to the list below tells a lot about the franchise.

Our sports staff voted and the following list of receivers includes every WR (not tight ends or running backs — who we ranked separately here) who has caught 50 balls or more for the franchise. Tell us how we did:

Evan Macy: Carmichael is the gold standard in the franchise, and his 79 touchdowns all with the Eagles are 31st all time. His numbers get more impressive when you take into account the era in which he played, which was far from the air-it-out offensive renaissance from the last few seasons.

Jimmy Kempski: No. 17 has since been worn by 8 players, while the team continues to hold onto numbers like 87 and 25 for some reason.

Jimmy: DeSean vs. Quick was a tough call. I think Quick is ahead. He had a five-year stretch where he averaged about 1100 yards and 10 TDs per season, which isn’t eye-popping by today’s standards. But it sure as hell was impressive in the mid-80’s when quarterbacks were only throwing for like 3000 yards per season.

Nick Tricome: The name matched his play. Look up Quick's highlights on YouTube and you'll see clip after clip of him catching a ball over his shoulder while a cornerback desperately tries to make up ground. Quick made the Pro Bowl five straight seasons from 1983-1987, was named First Team All-Pro twice (1983 and 1985), and finished the entirety of his nine-year career in Philadelphia as the franchise's fourth all-time leader in receiving yards.

Jimmy: He is securely one of he top three deep threats in NFL history.

Evan: I really do think Jackson is underrated as an Eagle. His ability to change a game in the blink of an eye is a very unique attribute for a player that small and the way his career in Philly ended (the first time) is confounding and weird.

Shamus Clancy: "T-O, T-O-T-O-T-O, T-O, T-OOOO!" In his lone full season in Philadelphia, Terrell Owens was a revelation, the type of offensive weapon that the Eagles had never had before. A top-three receiver in league history reached his peak in midnight green, Owens captured the imagination of this city in 2004 with dominant play and overwhelming personality. Yes, that same demeanor led to his infamous 2005 summer hold out and him being deactivated during the 2005 season, but, come on, how special was that 2004 season? Owens' presence brought those vibes.

Jimmy:  I never saw McDonald play, but he should probably be at the top of this list alongside Carmichael in whatever order you prefer, given his HOF status. If you get Ray Didenger to write a play about you, you’re pretty much a Philly legend.

Nick: I'm 100 percent with Jimmy here. If Ray Didinger writes a play about you, you should be way up the list — and it is a really excellent play by the way. The 5'9" receiver out of Oklahoma always played a game far bigger than his stature, establishing himself as one of the NFL's best during his 12-year career and as one of the most iconic Eagles of all time. He caught the first touchdown of the 1960 championship game to put the Eagles ahead of Lombardi's Packers and without him, that '60 team likely doesn't become the Philly sports legend it went on to be.

Jimmy: He was productive in his prime, but he fizzled after leaving in free agency. His Philly career was unique in that he came after all the conference championship games, and was gone before the Doug Pederson era.

Evan: My first year covering the Eagles was 2014 and Maclin was one of the nicest locker room guys, always taking the time to talk to reporters and answer all their questions, patiently and intently. The Eagles have had, in my opinion, some really good leaders at the WR spot, including Jordan Matthews and Nelson Agholor, each of whom followed that tradition of being a wideout who would give the media the time of day.

Shamus: People complained about his contract. I don't particularly care about that. Alshon Jeffrey made the greatest catch I've ever seen an Eagles player make in the biggest game in Philadelphia sports history, a perfect target for Nick Foles' balloon deep balls. In the 2017 postseason, he had 12 catches for 219 yards and three touchdowns. Much like the LeGarrette Blount acquisition that same offseason, Jeffery brought a swagger to this Eagles offense that was desperately missing. I'll talk about that Super Bowl catch the rest of my life.

Nick: A highly athletic wideout, Barnett earned just one Pro Bowl nod during his five-year run with the Eagles but was an offensive fixture of those early 90s squads, hauling in some of Randall Cunningham's biggest throws, including that 99-yard bomb against Buffalo.

Nick: Williams lined up opposite of Barnett in those early 90s Eagles offenses and was right behind him in production. Though he never exceeded 1,000 yards in a season, Williams caught 10 touchdown passes in 1993 and finished 13th all-time in receiving yards for the franchise (3,840), right behind Barnett in 12th who had 4,634 yards.

Shamus: Irving Fryar is more remembered as a Patriot, but he was legit awesome in 1996 and 1997 for the Eagles. That was with the likes Ty Detmer and Bobby Hoying throwing him passes. Imagine if he had been in Philly just a tad bit earlier in his prime when Randall Cunningham was still here.

Jimmy: All he does…

Shamus: The Cris Carter situation in Philly is a bit difficult to contextualize for a younger Philadelphian. Carter scored 11 touchdowns for the Birds as a 24-year-old wideout in 1989. He was then cut the following summer due to some substance abuse issues. Carter later credited former Eagles head coach Buddy Ryan for helping turn his life around because he was released. Carter, of course, would later go on to have a stellar Hall of Fame career with the Vikings.

Jimmy: He’s going to be really good for a long time in the NFL.

Evan: Howie Roseman could have begun a second Eagles run of Super Bowl contention with his savvy draft moves to acquire Smith, who has been every bit as good as promised. He and A.J. Brown are going to be a fantastic duo. One good season of Brown — by the way — could land him in the top 20 by next season.

Shamus: When the Eagles made their first ever Super Bowl berth in 1980, Charlie Smith went for 47-825-3 on a whopping 17.6 yards per catch. Let's be honest: this list falls off a quick rather quickly.

Nick: When I think of Jason Avant, I always picture him sliding toward the ground to catch a red-zone bullet that Donovan McNabb would send rocketing towards the ground. Felt like that happened a lot watching that era of Eagles football growing up. Regardless, Avant was always a pretty good third option to have at wide receiver and became a great veteran to have in the offense too as the team gradually transitioned from McNabb to Mike Vick then to Nick Foles at QB and Andy Reid to Chip Kelly as the coach. He won't go down as one of the franchise's greatest, but a fan favorite for sure.

Shamus: Put all the "unlike Agholor" jokes aside for a second. Nelson Agholor had 62-768-8 in 2017 and then went for 84 yards on nine catches in the Super Bowl, including three catches for 38 yards (and three first downs) on the Eagles' game-winning drive alone. Trivia fact to use at a party: Greg Lewis is the first Eagles wide receiver to catch a touchdown in a Super Bowl. The Eagles would've killed for 2002 Todd Pinkston in 2018 by the way.

Nick: Reggie Brown and Jordan Matthews, man, those were just two picks that never panned out.

Shamus: "The Silver Linings Playbook" novel differs from the movie adaptation in that it takes place during the 2006 Eagles season and Pat Peoples' favorite player is Hank Baskett rather than DeSean Jackson. He got boosted in my rankings because of that. If it's third and seven and the Eagles need eight yards, Greg Ward is a guaranteed five-yard gain for the team.

Nick: Cooper should not have still been on the team after that video surfaced.